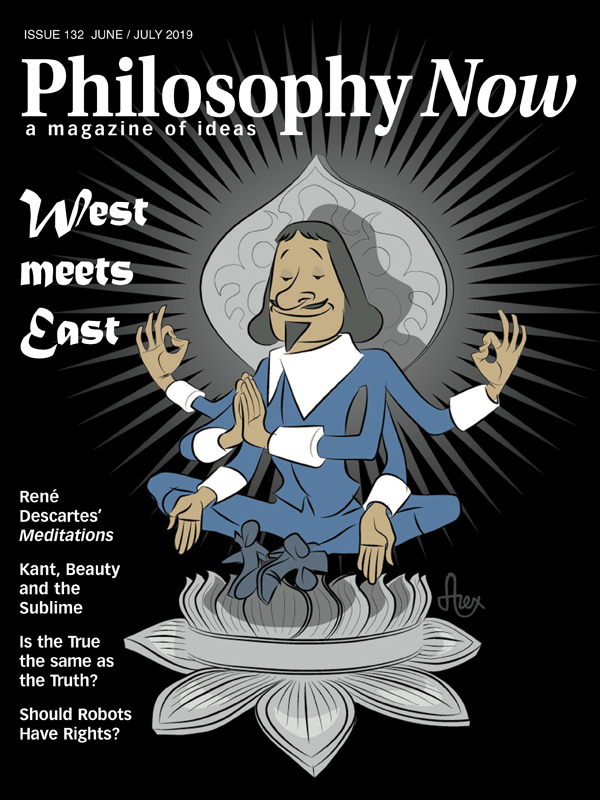 Karen Parham asks how close Western philosophy gets to Buddhism.

Truth and the True

Joseph Sen on types of knowledge in Western and Indian thought.

Hiroshi Satow remains placid in the face of change.

Is Karma a Law of Nature?

It seems Matthew Gindin is destined to ask, and answer, this question.

Henrik Schoeneberg contends that our next step is to learn to accept ourselves.

Michael Jordan asks how knowledge of circumstances affects our morality.

Siobhan Lyons asks where we can find the sublime in the modern world.

Stuart Greenstreet asks whether we may judge a work to be artistically good even if we know it to be morally evil.

Paul Conrad Samuelsson takes the perspective of the computer for a change.

Martin Jenkins considers the way of the samurai.

Anja Steinbauer talks to a philosophy professor in the West who studies classical Indian philosophy.

Remarks Re: Marx • Looking@Locke • Free For All • Wrong Footed On Ought v Is • Making Not Much of a Difference • Ethics of Future Groups • Elements of Spinoza • A Stand on Rand • Artful Dodging • Plumb This

A Passage to India

Seán Moran gets to grips with guards.

Raymond Tallis has some thoughts about intentionality.

Richard Baron wonders what changes in our own thinking it would take to live with sociable robots.

Philosopher at a Film Festival

The Parable of the Atheist and the Logical Positivist

Michael Langford drops in on the afterlife for an argument about personal identity.