I bought an old camera in a dusty North African souk. It still contained a film, so out of curiosity I developed it. The picture reprinted here finally saw the light of day after countless decades in the dark. 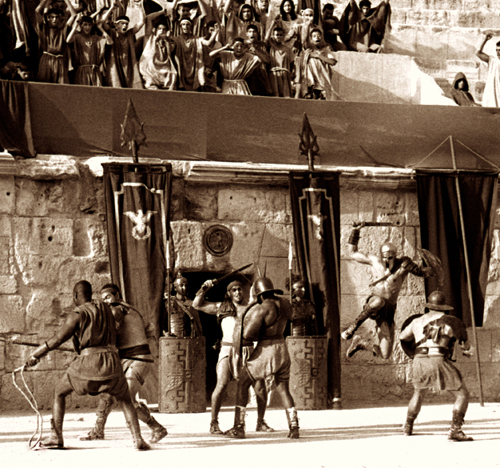 Wouldn’t that have been a great story? The truth is more prosaic. Granted, the camera is an old one, and the action did happen in North Africa. But I took the photograph, in the Roman amphitheatre of El Jem. Here I witnessed combat and heard the clash of weapons and the crowd’s roar. To capture this image for Philosophy Now readers, I too fought: not a struggle to the death, but a battle of wills. Philosophically, they were both examples of agon – an ancient Greek word meaning both ‘contest’ and ‘disputation’. More about that later.

There are people who do develop photographs taken by strangers. They haunt thrift shops and online auction sites, seeking exposed film and loaded vintage cameras. One enthusiast, Levi Bettwieser from Idaho, USA, “has spent ‘upwards of $10,000’ on rolls of film over the past five years, and says that he ‘can get 10 rolls in a row that come out blank’” (The Observer Magazine, 21st July, 2019). Why would anyone pursue such an unpredictable and expensive quest?

It is the very unpredictability of the enterprise that excites people like Mr Bettwieser. He says so himself: “My heart starts pumping.” What he enjoys is effectively gambling; a deferred gratification that is all the sweeter for being risky. Intermittent rewards, or in the behaviourists’ parlance, ‘variable-ratio reinforcement’, are so uplifting that we can become addicted.

Bettwieser’s hobby is an antidote to the predictability of smartphone photographs, particularly selfies. Standing at an iconic scene, we compose our faces into well-practised smiles and give a thumbs-up, knowing what the final image will look like. But this mildly narcissistic process misses the frisson of chance events. By playing safe, nothing is at stake; but neither are random, unexpected rewards a tantalising possibility.

Even without developing pictures taken by strangers, we can turn our photographic gaze to the world beyond our control. For a big chap, the masked swordsman on the right of my photograph moved quickly, and I wasn’t sure if I had successfully caught him in mid-flight on my 1950s Leica. I experienced deferred gratification over the photograph, between clicking the shutter and developing the film in my darkroom.

Mingled with that uncertainty, though, was a feeling of nikhedonia – a pleasurable anticipation of future success. This English word comes from the Greek goddess of victory, Nike, and ‘hedone’ (‘pleasure’). Sometimes, we just know that it’s all going to work out. When taking the photograph, I had an intuition that all would be well.

This confidence in one’s own abilities was a vital part of the gladiator’s armoury. The chances of death were high in the amphitheatre, but higher still if the combatant did not believe in himself. In her book Pompeii: The Life of a Roman Town (2010), Mary Beard estimates that there was “a loss rate of some 13 per cent per fight.” This worsened over history, so that by the Third Century CE, around half of the gladiators were killed in each match. The fighter who entered the arena expecting to lose would probably meet his expectations. And if he was not killed outright, the crowd would show pollice verso (‘with thumb turned’) that his lack of fighting spirit deserved the ultimate punishment. The hand gesture that has become a selfie trope was once a matter of life and death.

But the gladiators in my photograph were not really struggling for survival. The worst that could happen was accidental injury during the fake combat. They rehearsed their fighting moves to guard against this; and perhaps someone had performed a risk assessment beforehand. Or perhaps not. Working practices in these parts seem to be unfettered by health and safety considerations. I once saw a labourer being lowered down on a rope to paint the outside of a fourth-floor apartment while he sat nonchalantly on a white plastic chair.

The fighting here in El Jem was staged to advertise a major satellite TV sports broadcaster. It is not a new idea: the shoe company Nike, named after the goddess, used this same amphitheatre to film a ‘gladiatorial’ soccer game back in 1996. This time, the film company had evidently not paid enough to exclude other visitors from the arena. So, as a bona fide ticket-holder, I felt ethically untroubled in taking some discreet photographs of the spectacle happening in front of me. I was the only person doing this, and took care not to interfere with the filming. The quiet click of my camera couldn’t be heard above the shouts of the period-costumed ‘audience’ and the yells of the combatants.

The next yell was through a director’s megaphone: “Stop taking photographs!” was the firm direction I received. Under the baking sun, a showdown had begun. On the one side, a UK film crew, eight or nine strong, plus half a dozen muscular, armed stuntmen, and scores of extras. On the other side, a lone philosopher. The agon was under way: the protagonist and the antagonists were about to fight it out. My first line of defence was that we were all guests in another country and that the film crew had no special rights to prohibit photography here. The disputation went back and forth until a local man intervened. He brought me a bottle of cold water, and one of the ubiquitous white plastic chairs to sit on. This was a genius solution. He had simultaneously shown North African hospitality to a visitor and confined me to a fixed spot, in case I had intended to roam around in my photographic mission. The film people ignored me after this, and I continued taking photographs enthroned at this perfect vantage point. I resisted making a hand gesture to the crew (not pollice verso). The Greek agonal spirit is founded on philotimia – love of honour – and demands magnanimity in victory.

The Roman practice is more bloodthirsty. Our word ‘arena’ comes from the Latin harena (sand), which soaked up the blood being shed. The body count was increased to make the drama more gripping. Life or death decisions were put into the hands – specifically, the thumbs – of the crowd. Some losing gladiators lost twice: firstly in combat, and secondly in the court of public opinion. If the crowd so decided, the loser had to kneel bravely and recipere ferrum, ‘receive the iron’ – the fatal sword.

This interactive engagement with the games diverted the citizens’ attention away from current affairs. The spectacle of the arena was used to distract the populace from their loss of political freedom as the former Roman Republic descended into a dictatorship under autocratic emperors. The poet Juvenal is sometimes paraphrased as writing, “Give them bread and circuses and they will never revolt” (Satire 10). This policy of panem et circenses – better translated as ‘bread and the games’ – was a cynical way for authoritarian rulers to manipulate the people.

In appropriating sporting events for political purposes, the Romans distorted the nobler ideals they had inherited. Greek athletes ostensibly competed just for the kudos: the favour of the gods. To do this, they had to excel in three domains: the agonic (competitive), the aesthetic (beautiful), and the ludic (playful). The Romans reduced this to the brutally agonic.

Plato argued that virtues such as justice are often forced into alignment with what suits those in power rather than authentically partaking of the transcendental ideal (or ‘Form’) of Justice (Republic, 344c). This is the case with sporting ideals too, and not just in Roman times. Multinational corporations craving association with winners, dodgy nations wanting to polish their images, and ambitious politicians looking for publicity, all turn to sport, warping its ideals in the process. As in the ancient era, contemporary circenses – competitions such as the Olympic Games – are still used to deflect criticism: except that nowadays they are not even free for the spectator, and are also a marketing opportunity for modern panem – fast food – together with sneakers, electronic products, and betting services.

The betting industry is a particularly dangerous business to link with sport. The contest is often thrilling enough on its own. Just as Mr Bettwieser’s heart is set pumping faster by the unpredictability of developing films, sports fans experience the tension of the battle between protagonist and antagonist viscerally. The spectator can’t foretell the outcome of such combat, for, like a theatrical tragedy, there is always the possibility of a sudden reversal of fortune. Our vicarious identification with the protagonist, whether an individual sportsperson or a team, and the emotional roller-coaster we experience, has a beneficial effect on our mental health. As in drama, it achieves this by working on our feelings of pity (eleos) and fear (phobos). The dramatic action, “through pity and fear effect[s] the proper purgation (catharsis) of these emotions” (Aristotle, Poetics). But if our emotional identification with the protagonist is further strengthened by gambling, the relief of catharsis combined with intermittent monetary rewards could be the path to addiction. An Aristotelian analysis would see moderate betting as relatively harmless: nothing to excess. But undisciplined (akratic) people can resist everything except temptation, and may gamble excessively, against their better judgement. The Twenty-First Century combination of satellite sport and online betting services, particularly ‘in-play betting’, is a powerful incentive to overdo things. Even the pleasure of occasionally winning is only fleeting: “an illusion which fades when we reach it” (Schopenhauer, On the Vanity of Existence). And akratic gamblers inevitably lose over time because of a false nikhedonia and overconfidence in their own judgement, while satellite sports and betting firms are predictably enriched. From a white plastic imperial throne, both businesses receive a thumbs down from me.

Seán Moran teaches postgraduate students in Ireland and is a professor of philosophy at a university in the Punjab. No gladiators were harmed in the taking of this photograph.