According to a large-scale, crosscultural study published in the Proceedings of the Royal Society B, there are differences between the ways women and men make moral decisions. These differences were more marked in cultural environments with flexible values and good gender equality. Mohammad Atari, one of the authors, comments: “In more equal societies, men and women are freer to express judgments and preferences, so you should expect larger sex differences.” Across the board, women showed a greater concern than men for values of compassion, fairness and ‘moral purity’, whereas values such as loyalty and authority varied more depending on the environment. The research was based on an anonymous online survey of moral values involving more than 330,000 people from 67 countries. In a secondary process, these findings were confirmed by data collected by independent studies involving 12,000 people from 19 countries.

Ethics Study 2: What If Everyone Did That?

A new study just published in the Proceedings of the National Academy of Sciences participants were asked to comment on a number of moral scenarios. The results, it seems, are best explained by thinking about the universalizability of the moral action concerned: “Why not pick flowers for your home from the nice bushes in the public park? Why not take all of the money from the change jar at the checkout counter and buy yourself a chocolate? Why not flush a paper napkin down the toilet at work? To any of these questions, a person might reasonably respond: What if everybody did that?” So asked the authors of the study, a team led by Sydney Levine at Harvard University. They believe there is one type of moral problem can be particularly well accounted for by this moral universalism: threshold problems. “We define threshold problems by a basic structure: If only a few people do a particular action, nobody is harmed, but, when many people do it (ie, more than the ‘threshold’ number), everyone is harmed,” wrote the researchers. “Because universalising asks what happens when everyone abides by the same principles, it renders distinctive moral judgments in these cases.”

Technology has a tendency to outrun moral thinking. Brain-Computer Interface (BCI) technologies are now a reality, but the moral issues surrounding this important technology have not yet been fully thought through. Two new papers explore this uncharted territory with particular attention to the implications of using BCI for cognitive enhancement. Allen Coin of North Carolina State University and lead author of both papers explains: “BCI technologies are devices that detect brain signals conveying intention and translate them into executable output by a computer.” According to his co-author, Veljko Dubljevic, “BCI devices can be non-invasive devices that users wear, or they can be invasive devices, which are surgically implanted.” The moral issues that need to be addressed cover a wide spectrum of concerns, including the use of animal testing, and the psychological consequences of invasive surgeries for patients, since some find themselves in serious distress. Dubljevic elaborates: “We also need to assess questions on the extent to which users feel the BCI is an empowering extension of their minds, as opposed to challenging their sense of self. These are big questions, not afterthoughts.” He concludes: “The technologies are coming whether we’re ready or not. How will we regulate them? Who will have access to them? How can they be used? We need to start thinking about those questions now.”

In the Hoofprints of Montaigne

French philosopher Gaspard Koenig is riding from Bordeaux to Rome on his horse Destinada, following the route along which Michel de Montaigne once rode on his journey in 1580 to 1581. Koenig, a well known figure on the Parisian philosophy scene and author of novels and essays, says Destinada evokes feelings of nostalgia in people he meets on the way, “opening hearts” and leading to interesting conversations. Koening is carrying the complete works of Montaigne with him on his Kindle. His declared mission is a “search for European humanism.” Will he find it? Watch this space.

Poland’s constitutional tribunal has issued a near total ban on abortion. Poland already had one of the most restrictive abortion laws in Europe, outlawing abortions for social or economic reasons. Women’s organisations estimate that out of the 100,000-150,000 abortions that Polish women undergo each year, only about 1,000 are legally performed. Now, any woman who is carrying a foetus with severe abnormalities will have to carry the child to term, even if it has no chance of surviving. The October 22 ruling has sparked the biggest protests the country has seen since the fall of communism in 1989. Overwhelmingly, the protesters are young people. Demonstrations have continued daily across many cities and towns, even in conservative rural areas.

The many great contributions that Jonathan Sacks has made to moral thinking, to his community and the world at large cannot be summarised in a small paragraph. With a PhD in Philosophy from King’s College London, in the course of his life Sacks held lectureships and professorships in Philosophy at a number of universities. He was Chief Rabbi of the Commonwealth until 2013 and, as Baron Sacks, a life peer and member of the House of Lords since 2009. Many will remember him for the 1990 BBC Reith Lectures he gave on The Persistence of Faith. Jonathan Sacks died of cancer on 7th November 2020 at the age of 72. 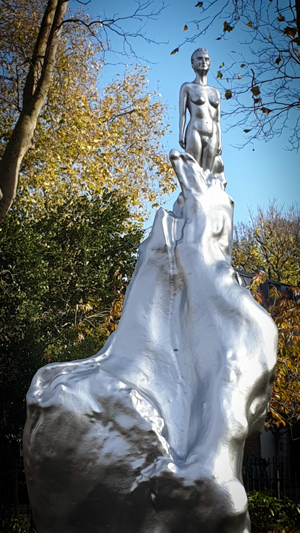 Many great women have helped shaped the world in which we live. Unfortunately, very few of them are honoured by statues: less than 3% of statues in Britain are of non-royal women. All the more reason to celebrate the fact that there is finally a statue to pioneering feminist philosopher Mary Wollstonecraft (1759-97), author of A Vindication of the Rights of Woman. Bee Rowlatt, chairwoman of the long-running ‘Mary on the Green’ campaign to erect a monument to Wollstonecraft on London’s Newington Green said: “Her ideas changed the world. It took courage to fight for human rights and education for all.” The silvered-bronze sculpture by artist Maggi Hambling has ignited immediate controversy as it includes a naked female figure, a feature often associated with patriarchal aesthetics. Furthermore, the figure is of an ‘everywoman’ rather than a specific likeness of Wollstonecraft.