Czech philosopher, former dissident and former minister of education Jan Sokol has died at the age of 84. He was one of the rare philosophers to also be an active politician. For political reasons, Sokol was barred from university studies after the 1948 Communist coup. Instead he trained as a goldsmith, then as a mechanic, and then eventually as a computer programmer. In his spare time, he studied botany, physics and mathematics. Most importantly, he participated in the house seminars organised by his father-in-law, the great Czech philosopher Jan Patočka. These inspired him with a love of philosophy. In the late 1970s he read the text of Charter 77 and found that Jan Patočka together with Václav Havel and Jiří Hájek were among the Charter’s organisers. He signed the document without hesitation, one of the first to do so. In the early years after the Velvet Revolution he served as an MP and as Minister of Education, Youth and Sports. Sokol also helped establish the Faculty of Humanities at Charles University, became a rector and even ran for President in 2003, losing to Václav Klaus. It was not until 1995 that he obtained a PhD in Philosophy, working as a full time professor of the subject after that. His many books covered a wide range of philosophical topics, but particularly ethics and phenomenology.

On two unrelated occasions, in early February and March 2021, social media in Morocco trended with the news that Moroccan philosopher and novelist Abdallah Laroui had died. However, according to his editor, the 83 year old, one of the Arab world’s best known philosophers, is “still alive” and “doing well.” Laroui’s work has been honoured with the Catalonia International Prize, and he was named Cultural Personality of the Year when he was awarded the Sheikh Zayed Book Award in 2017.

Stanley Milgram’s controversial social psychology experiments in 1963 changed our understanding of moral behaviour in the face of authority. A recent experiment in the Netherlands opens up new aspects of this issue, this time using Functional Magnetic Resonance Imaging (fMRI) to investigate what was going on in the brains of the experimental subjects. Emilie Caspar, Valeria Gazzola and their team at the Institute of Neurosciences in Amsterdam conducted a study on 40 participants, who were on average 25 years of age. The participants were separated into two groups, named ‘perpetrators’ and ‘victims’, with the perpetrators administering electric shocks to the victims’ hands. The electrodes had been calibrated in such a way that each shock would only hurt a little. After a while, ‘perpetrators’ and ‘victims’ changed roles. The respective perpetrators’ brains were scanned during the process, and they were able to observe the twitching of the victim’s hand on a screen. Sometimes the lead investigator would give an order when to administer a shock, on other occasions the decision was left to the perpetrators. The fMRI scans showed that when shocks were given as a result of an order, there was less activity in the brain regions associated with empathetic reactions than when it was their own decision. They also felt less responsible and less sorry, as shown by the decreased activity in the anterior cingulate cortex and the insular cortex. Furthermore, although participants in the experiments were repeatedly reminded that the strength of the shocks was invariable, they felt that the victims’ pain was greater when they had decided to give a shock rather than having been ordered to do so. The Milgram experiments have traditionally been explained with reference to the fact that orders make individuals feel less responsible for outcomes. However, as it turns out, being given an order changes one’s perception of reality itself, such as of the strength of the shock. 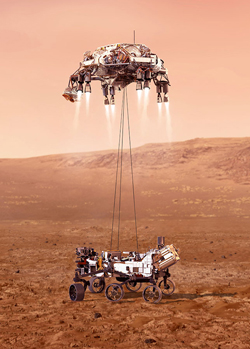 Perseverance landing on Mars, in this artist’s impression created by NASA.
Photo © NASA

Three space missions have recently reached Mars: the Arab space probe Hope, the Chinese Tianwen-1 space mission and the USA’s Mars-2020 mission. All three will gather important scientific data. However, Mars-2020 could mark a turning point in human history. Its Mars rover Perseverance will pick up ground samples which will be collected by a European follow up mission and for the first time be brought back to Earth. If life developed at some point on Mars, which is quite likely, then there may be some traces of it in the samples. If Martian microbes are discovered, we would, in a way, make first contact with alien life. How are we going to treat these microbes? Should we think of them as we think of Earth microbes? Can we use them, treat them as dispensable? And how would it affect the way we consider possible colonisation of the Red Planet? Let’s remember Carl Sagan’s 1980 statement: “If there is life on Mars, I believe we should do nothing with Mars. Mars then belongs to the Martians, even if they are only microbes.”

The Black Lives Matter movement has been an excellent catalyst for critical thinking. One issue it has made us reconsider is how European colonial and imperial history is still with us, in the form of biased accounts, public statues and displays in museums. The growing public rejection of an official, uncritical view of history, taught in public institutions, has led to pressure on museums and other educational institutions to present a more critical, balanced account of history. In the UK the government has responded by appointing Secretary of State for Culture Oliver Dowden as a ‘free speech champion’. The “champion’s role will be to uphold free speech by sanctioning universities deemed to fail to do so by deplatforming visiting speakers.” In other words, free speech is to be enforced, if this is not a contradiction in terms. However, Dowden has also threatened museums with funding cuts if they remove artefacts linked to Empire or slavery. In a recent meeting with 25 leading British public heritage bodies, he warned them that using public money for projects which could be seen as ‘political’ would be punished. He also told these public institutions, which include the National Trust and the British Museum, that they “must defend our culture and history from the noisy minority of activists constantly trying to do Britain down”.