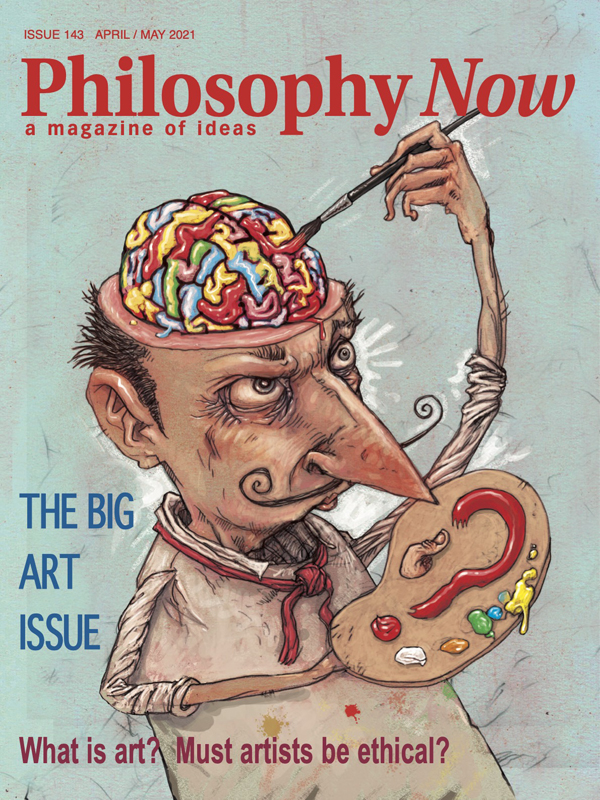 Jessica Logue conducts an investigation into their relationship.

Greg Stone offers a contractual definition of art, among other artful ideas.

Atika Qasim questions her own, and others’, motives for taking photos.

From Conceptual Art to Social Art

The Moore the Merrier

Robin Wynyard reflects on his philosophical journey, and how this has influenced his thoughts about ageing.

Truth & Alienation In a Covid World

Alex Duell explores how the Covid-19 pandemic and the subsequent shift to life online has contributed to human alienation from nature.

Camus, The Plague and Us

Ray Boisvert on Albert Camus, Thomas Merton and a call to be a healer in a crisis.

The Last Will and Testament of Donatien-Alphonse-François Sade, Man of Letters

The Marquis De Sade’s actual will, translated into English by R J Dent.

Hilarius Bogbinder thinks about a political theorist who saw action as good thought.

Peter Adamson is Professor of Late Ancient and Arabic Philosophy at the LMU in Munich, and a Philosophy Now columnist too. Amirali Maleki talks with him about Islamic philosophy.

Believe It Or Not • Reading The Signs • Neither Idle Nor Anxious • Time After Time • Free Illusions? • Unjust Causes? • Cold Compassion? • Full-of-Mindness • Let’s Rock

A Social Theory of Freedom by Mariam Thalos

We dive into the crosscurrents of society and identity, as Matt Teichman is captured by an idea of freedom.

Tim Moxham urges us to disobey!

Sci Fi & The Meaning of Life

Shai Tubali sees how non-human minds mirror our condition back to us. [CONTAINS SPOILERS!]

A Day by the Stream with Heraclitus