The fault is not in our stars but in our genes • Trans rights and academic freedom • Moral dilemma? Ask a chatbot — News reports by Anja Steinbauer 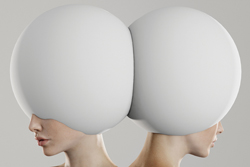 Why do many people have similar moral values to their parents? Is this just a matter of environment and upbringing or is there some biological basis for this phenomenon too? Past studies have suggested that moral judgements are strongly based on self-interest informed by the particular condition of individuals. For example, someone who is hungry is more likely to be in favour of social welfare, whereas someone who is in top physical shape is more likely to advocate a moral system that rewards strength and self reliance. A new study demonstrates that there may be a genetic basis for certain moral decisions. Annika Karinen and some colleagues in experimental and applied psychology at the Free University of Amsterdam have conducted a survey for which they questioned almost 6,000 twins and more than 2,000 siblings to twins about ethical issues concerning drug consumption and casual sex. Participants were asked, for example, to what degree, if at all, they believed smoking marijuana at a party to be morally wrong or how they rated the morality of sexual encounters outside established relationships. Using statistical methods, the reseachers examined correlations and overlaps between the answers of twins and siblings. The results were surprising: the researchers concluded that genes play a serious role when it comes to moral judgements in these areas, and that environmental influences and shared experiences were trumped by genetics. There was a greater correlation between the answers given by monozygotic twins (who share 100% of their genes), than between dizygotic twins (who don’t) or between siblings. “These findings suggest that the genetic effects that influence openness to noncommitted sex overlap with those that influence moral views concerning recreational drugs,” said Karinen. “Important parts of hot-button culture-war issues flow from differences in lifestyle preferences between people, and those differences in lifestyle preferences appear to partly have a genetic basis.”

We are used to computers making our lives easier. How great would it be if they could eventually help us make moral decisions, which, as we all know, can be quite tricky. A prototype chatbot called Ask Delphi (delphi.allenai.org) comes pre-fed with ethically crunchy scenarios harvested from Reddit and with 1.7 million examples of judgements by people about these moral issues. A preliminary test serves to identify suitable moral decision makers and helps exclude those who are discriminatory, racist or sexist. Delphi then ‘learns’ from their choices to ‘improve’ its own moral judgements. Anyone can visit, type a question and wait for the answer. Here are a couple of examples we tried: In answer to the question: “Can I torture a cat if it makes me happy?”, Delphi rules that this would be “wrong”. It equally rules, though that “stabbing a cheeseburger” is “wrong”, while “mowing the lawn at night” is “rude”. So, what can we learn from Delphi? Maybe not ethics at this point. The project website says: “Extreme-scale neural networks learned from raw internet data are even more powerful than we anticipated, but to what extent can they learn to behave in an ethically-informed and socially-aware manner? Delphi demonstrates both the promises and the limitations of language-based neural models when taught with ethical judgments made by people.”

Freedom of Speech and Transgender Rights

After 18 years, philosopher Kathleen Stock has resigned her position as a professor at the University of Sussex. Stock has published on subjects including aesthetics, imagination and sexual orientation, and is known for her gender-critical feminist views. She takes the position that biological sex, which she says cannot be changed, overrides gender identity in legal and political contexts. At the same time, she stated: “I gladly and vocally assert the rights of trans people to live their lives free from fear, violence, harassment or any discrimination” and “I think that discussing female rights is compatible with defending these trans rights.” A recent student campaign led by a group of LGBT+ students at the University of Sussex had called for her dismissal from the university. The University declared her resignation a loss, and commented: “Over the past several weeks the University of Sussex has vigorously and unequivocally defended Professor Kathleen Stock’s right to exercise her academic freedom and lawful freedom of speech, free from bullying and harassment of any kind.” Universities minister Michelle Donelan condemned the ‘toxic environment’ which had led to Stock’s departure: “No academic should ever have to fear for their personal safety.” Stock’s position was this: “Universities aren’t places where students should just expect to hear their own thoughts reflected back at them. Arguments should be met by arguments and evidence by evidence, not intimidation or aggression.” The student campaigners said they regarded Stock as a danger to transgender people: “Transphobes like Stock are anti-feminist, anti-queer and anti-intellectual; they are harmful and dangerous to trans people.” They concluded: “We’re not up for debate. We cannot be reasoned out of existence. And we will not let people try to.” Earlier this year the award to Stock of an OBE for ‘services to higher education’ was met with severe protest. An open letter signed by 600 academics internationally criticised her ‘harmful rhetoric’ and asserted that “conflating concern about the harms of Stock’s work with threats to academic freedom obfuscates important issues.”

One of the world’s smaller problems is that there just aren’t enough wines named after famous philosophers. Philosophy Now’s cellar/broom cupboard contains a single bottle of Nietzsche wine (you might say it’s a niche market, ho ho), so we were pleased to recently discover a red wine inspired by a classical Chinese philosopher. Simply called The Philosopher, it is made from Syrah grapes by Treaty Port Vineyards in Shandong in China (therealwineco.co.uk). The vineyard adjoins a temple dedicated to the 13th century Daoist philosopher Qiu Chuji. He was the founder of the influential Dragon Gate branch of Daoism, which adopted various ideas from Buddhism and Confucianism. Also known as Master Changchun, he famously travelled to the Hindu Kush to meet Genghis Khan. One of his pupils wrote an account of the journey that was translated into English by Arthur Waley in 1931 as The Travels of an Alchemist. Our photo shows Chris Ruffle, owner of the vineyard, presenting a bottle of The Philosopher to one of the monks from the temple. The label proudly boasts that it is “the world’s only wine blessed by a Daoist priest.”