Good news for all fans of existentialist thinker Karl Jaspers (1883-1969). His complete unpublished works, including letters, family archives and photos, as well as audio recordings of the philosopher have been made freely available online. Following years of preparation, the German Literary Archive (DLA), which also holds important documentation concerning thinkers such as Hannah Arendt, Martin Heidegger, Hans-Georg Gadamer, Arnold Gehlen, Nicolai Hartmann, Edith Landmann, Karl Löwith, Odo Marquard, Joachim Ritter and Ernst Tugendhat, has now released all materials. The significant literary estate of the philosopher who died 1969 in Basel can be found via the DLA website: www.dla-marbach.de/

It is fair to say that Diogenes of Sinope (412 or 404 BCE-323 BCE) caused considerable controversy in his time. The Cynic philosopher, who spent years living in a wine storage jar or barrel in Athens, famously rejected Alexander the Great’s offer to grant him any wish by replying that all he wanted was for Alexander to stop blocking his sunlight. This was an unheard-of rebuke to the most powerful man in the world. A strict moralist, Diogenes and his followers believed that you should not do anything in private that you would not also do in public, resulting in a lifestyle that their fellow citizens disgustedly said resembled that of dogs (kynos). However, virtue was central to the life and beliefs of these strange philosophers, who often reprimanded people around them for their moral failings. It is said that Diogenes used to carry a lantern in the marketplace in the middle of the day, holding it up to shine in the faces of passers-by. When asked why, he’d reply that he was looking for an honest man. It is therefore appropriate that sculptor Turan Baş depicted Diogenes as holding a lantern and standing on a barrel. Erected in 2006, the 5.5m statue graces Diogenes’ home town of Sinop, on Turkey’s Black Sea coast, and was commissioned by the municipal council. The statue soon became an object of controversy. Local politicians criticized the event it depicted, stating that Diogenes’ search for honest people was an implied insult to the people of Sinop – despite the fact that any such event would have taken place far away in ancient Athens. In 2017, protests again flared up with complaints that the statue was an attempt to link modern Sinop and its citizens with the cultural heritage of Greece. Ismail Tezic, a spokesman for the Erbakan Foundation (named after former Turkish Prime Minister Necmettin Erbakan, himself born in Sinop), said: “We are not against art and statues. However, we are opposed to those who try to stick the label of Greek philosophy and ideology on Sinop.” The statue is still there but the dispute continues to this day. 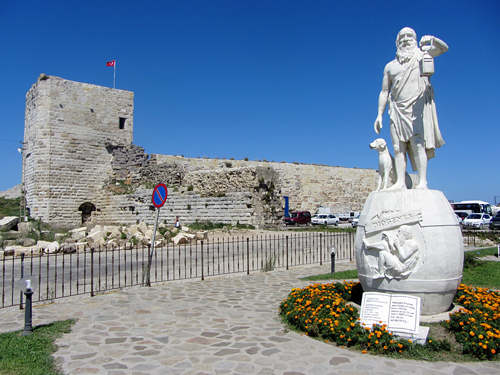 Feminist philosopher and philosopher of education Nel Noddings was involved in education all her adult life. Born in 1929 in Ivington, New Jersey, her first degree in mathematics and sport was followed by a Masters in mathematics at Rutgers University and later a PhD in education at Stanford. She then taught mathematics for 23 years at primary and high school levels, before embarking on an academic career that would lead to a considerable body of work at the intersection of education and philosophy. She became Dean of the School of Education at Stanford and received numerous awards for her outstanding teaching. Later she joined Columbia University, then Colgate University and held the presidencies of the Philosophy of Education Society and the John Dewey Society. Noddings was a leading advocate of the ‘philosophy of care’, holding that caring is the foundation of morality. She argued this on the basis that each person’s identity is defined by the set of relationships they have with other humans and the world around them. Noddings did a great deal to develop this approach and she created educational concepts to go with it. This included a ‘Caring Curriculum’, designed to apply the idea of care to the different dimensions of self, friends and peers, distant others, animals, plants, the human-made world and ideas. Married since 1950, she had 10 children. Nel Noddings died on 25 August 2022.

After studying philosophy at Reed College and Cornell University, Sydney Shoemaker lectured in philosophy first at Ohio State University, then at Cornell, where he became Susan Linn Sage Professor of Philosophy. He was invited to give the John Locke Lectures at Oxford University on ‘Mind and Behaviour’ and the Royce Lectures at Brown University on ‘Self-Knowledge’ and ‘Inner Sense’. Shoemaker made ground breaking contributions to the philosophy of mind, particularly concerning the nature of mind, the nature of self-knowledge, and the nature of mental properties. He criticised theories that explain self-knowledge in terms of an ‘inner sense’. Rather than humans merely being introspective, he argued that perceptual and sensory states have non-representational features, ‘qualia’, which determine what it is like to have them. In ‘Persons and Their Pasts’, Shoemaker developed a neo-Lockean view of personal identity. His ‘Functionalism and Qualia’ is a defence of functionalism against the problem of absent qualia. Shoemaker died on 6 September 2022, at the age of 90.

Saul Kripke (1940-2022), one of the most famous philosophers of his generation, passed away on 15 September 2022. He published his first influential paper at the tender age of 17, but his best known book is Naming and Necessity (1980). He made many contributions to modal logic, metaphysics and philosophy of language. We will publish a full obituary in Issue 153.