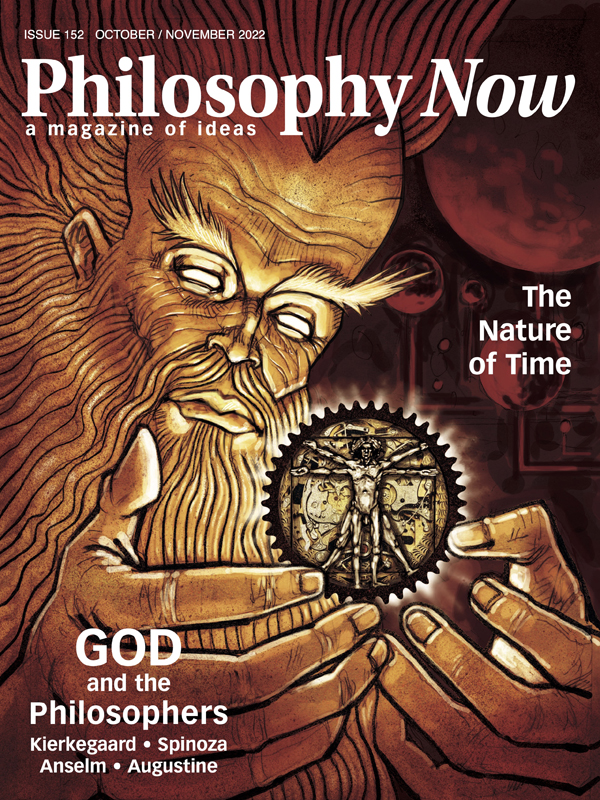 GOD AND THE PHILOSOPHERS

Peter Mullen explores the argument that by definition, God exists.

Benedict O’Connell argues we must recognise our limitations about knowing God.

Robert Griffiths looks into an anti-religion, pro-God way of thinking.

Stuart Hannabuss journeys into the human condition with Søren Kierkegaard.

The Strange Story of The Soviet Spinoza

Lesley Chamberlain on the Spinozists’ dangerous dance with the Bolsheviks.

The Horror of Relations

Jonathan Beever explores the light and dark sides of interconnectedness.

Anthony Proctor asks: Are we on time? Do we have time? What is time?

The Phenomenology of Time in Memento

Becca Turcotte looks at some aspects of our experience of time, as revealed by a temporally-challenging movie.

Nat Rutherford, a moral philosopher and lecturer in political theory at Royal Holloway, University of London, talks with Annika Loebig about the connections between morality and happiness.

The Fantasy of Conscious Machines

Raymond Tallis says talk of ‘artificial intelligence’ is neither intelligent nor indeed, intelligible.

The Enigma of Reason by Hugo Mercier and Dan Sperber

We descend from the divine to the human as Peter Stone reasons about the purpose and uniqueness of human reason.

The Ahuman Manifesto by Patricia MacCormack

Stephen Alexander is against a work against humanity.

Existentialism is a Humanism by Jean-Paul Sartre