The Phenomenology of Time in Memento

Becca Turcotte looks at some aspects of our experience of time, as revealed by a temporally-challenging movie.

We all want to understand the nature of the world in which we live, but philosophers have pointed out that there are some big obstacles to doing so. What we see, hear and touch depends not only on the external world but also on the nature of our sense organs. Frustratingly our experience of perception is also shaped by the structure of our minds – by our categories of understanding, as Kant put it – and by our cultural expectations. So how can we obtain truly independent information about the external world to understand it better? The 20th century philosophical movement known as phenomenology said that we should try to focus on the immediate data of perception, to notice how things look before we culturally interpret them. Philosophers such as Husserl and Heidegger, and a little later Sartre, tried to develop techniques to make it easier to do this. What is often forgotten is that these techniques can apply not only to our perceptions of what is around us in the present moment, but can also be used to try to grasp how things change from moment to moment – in other words, phenomenology can be used to better understand the nature of time.

Our perception includes memory, imagination, and anticipation. The importance of these often philosophically-overlooked parts of our experience is highlighted in Christopher Nolan’s debut movie Memento (2000), so I’ll use that movie to illustrate some of the key concepts here.

Memento tells the story of Leonard Shelby (Guy Pearce), who has short-term memory loss from a home invasion that also resulted in his wife’s death. He’s unable to make new memories or remember what happened even just a few minutes earlier. The last long-term memory he has is of his wife being attacked. Shelby seeks revenge against his wife’s murderer. He spends most of the movie following clues he leaves for himself, including tattoos, polaroid photos, and notes-to-self, which he hopes will lead to the attacker. These mementos keep him on track with his mission. Throughout the movie, Shelby constantly questions who he can trust, even himself. We discover that he is being used by a crooked cop, Teddy, who has been manipulating him into killing other people. Shelby then manipulates himself into killing Teddy.

The way that the story is told is unique; it has a retrograde narrative that shows you the climax at the beginning and slowly reveals the story backward. You don’t get a clear picture of everything that happened to Shelby until the end of the movie, when the audience can put together the pieces of what has happened.

The phenomenological approach uses three main structural forms to analyse experience. In experience, we see things as parts and wholes; as identities in a manifold; and as presence and absence.

Every time we think about something, we articulate the parts and wholes that make up the content of what we think. Wholes can be separated into two different kinds of parts; pieces and moments. Pieces can exist and be presented apart from the whole, are able to be detached from the whole, and can themselves become a whole independently, whereas parts cannot. In Memento, most scenes are pieces that exist for the main character and the audience as separate from the whole story. There are also moments that cannot be separated from the story, such as his tattoos and photos. In phenomenological terms, these would be moments of the experience. Moments are parts of experience that cannot exist or make sense without the whole to which they belong, they can never be detached from it. They are non-independent and can only be thought of as moments abstractly. For Shelby, such moments include his tattoos and taking photographs, as these moments cannot be detached from his story. Without them he would not have any recent background information on himself, or anything telling him what it is he needs to do, which is why they cannot be thought of independently from his story. We might say his story is founded on these things. 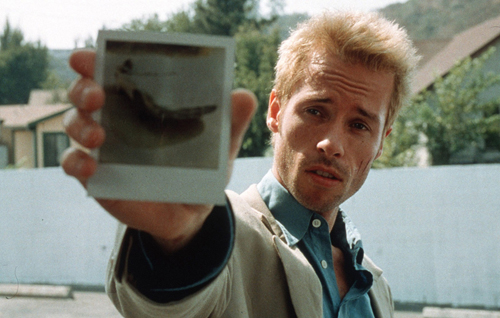 Identity in a Manifold of Appearance

Each scene also presents a new manifold, giving the audience many layers of perception through which we can understand Shelby’s identity. The manifold is the collected information in experience yielding a continuous identity to something. Each scene of the movie reveals slightly more of Shelby’s story, helping the audience understand the different aspects of his identity. However, for Shelby, his identity is in constant flux because his condition prevents him from fully accessing his living present. An identity synthesis usually occurs in regard to retention of the past and ‘protention’ of the future in the living present. This is not possible for someone who cannot form new memories. We could say that Shelby knows who he was, but not who he is. His identity to himself is unstable, constantly in flux, and he’s unable to maintain a coherent identity beyond who he once was. This is highlighted in the movie when the audience thinks that they know him at the beginning as he appears; as just a victim on a search for vengeance, yet throughout the movie the audience gains a sense of his true present identity as an oblivious hitman being manipulated by a crooked cop. And in fact his identity transcends the manifold of the movie, since there are significant parts of his identity that are still not revealed by the end of the movie.

Recognition of identity includes experiencing presence and absence. Our perception of identities is usually shaped by the absent past and absent future. Indeed, all our experience can be seen as a blend of presence and absence because the absences of past and future are present in all experiences. Yet without temporal continuity we would just experience momentary presences that are separate from each other. Experience is supposed to have a kind of flow to it, where the present yields to another present and still retains the absent past. This is not the case for Shelby: he cannot form new memories, which leads him to live in a constant ‘now’. He also cannot easily plan for the future: all he has is the present moment.

Often, empty and filled intentions are directed to the same object, making it both present and absent at the same time. This is the case in Memento, when Shelby seeks to avenge his wife by killing her murderer. But having done so, he then forgets that he’s done it, and continues to seek what’s again absent.

Most people get the satisfaction of absently intending an event. They can do this because of the experience of the living present, which is a primary impression that retains experiences from the past while opening us up to the future. One’s experience is shaped by what one retains from past experiences and an opening before you that welcomes continued perceptual engagement in the future. Without being able to anticipate or remember, we would not be able to properly organize the processes that occur in the world into temporal patterns. This happens to Shelby when he forgets that he already got his vengeance.

Phenomenology also calls our attention to more complicated forms of perception, such as memory and imagination. The ‘displacement of the self’ that happens in memory, imagination, and anticipation, can allow a heightened sense of self-identity – but not for Shelby.

In remembering, we do not imagine the object, it’s more like a kind of perceiving. Memory is similar to reperceiving earlier perceptions. In Memento, when Shelby remembers his wife, he calls up and relives earlier perceptions of her, bringing them to life again and re-living them.

Within the action of remembering we can usually recognize a special type of presence and absence. We store up perceptions we lived through in our memory and call them up when we remember the objects as they were at that time. Memory is thus a blend of presences and absences by reactivating the object not there and then, but also here and now as part of the past.

Through our memory, we can displace ourselves into the past. This means we are not always confined to the here and now. Without the displacement that comes with memory, we also could not be fully actualized as selves and as human beings. Shelby is limited in his ability to do this; he can only remember his life before the accident, and can only displace himself to that past.

In imagination, we suspend belief and displace the self from the real world into a possible future or alternative realities. The displaced forms of consciousness are derived from material provided to them through earlier perception. But whereas in memory the object presents itself as the real past, imagination is a suspension of belief, and of reality. Yet in both perceptions, the self is transported to a time outside of the current moment.

While imagination has a similar structure to memory in terms of experience, in imagination one suspends belief and enters a fantasy world while still living in the real world. This is captured best in the final scene of the movie, when Shelby is driving his car in real life while imagining a world in which he’s with his wife.

Because we can imagine the future, we can make choices that lead to imagined outcomes. This is illustrated by Shelby setting himself out for revenge on the crooked cop Teddy. However, although he can sometimes imagine the future Shelby is unable to properly anticipate, because he forgets the circumstances of his current moment and soon becomes oblivious to possible decisions. This is shown clearly when he forgets who is chasing who in a fight scene; he doesn’t know if he’s the one doing the chasing, or the one being chased.

Phenomenology is a promising way of describing our experiences of time. It helps us analyse details that otherwise would go unnoticed or unmentioned. This movie lets us see the complexity and richness of our lived experience of time, of parts and wholes, of identities in a manifold, and of presence and absence, in a unique and dramatic way.

Becca Turcotte is a university student working on her BA in philosophy in Northern Ontario while living with multiple sclerosis.