Peter Mullen explores the argument that by definition, God exists.

In one form the Ontological Argument for God is basically the argument: 1) God is by definition the perfect being; 2) It is more perfect for a perfect thing to exist than not exist; 3) Therefore God exists.

This argument for the existence of God was given the name ‘ontological’ by Immanuel Kant (1724-1804), but it was the invention of Anselm, Archbishop of Canterbury, in 1078, in his book Proslogion (how we miss philosopher-bishops these days!). The word derives from ‘ ontos’, which is the Greek word for ‘being’. Anselm’s own form of the Ontological Argument begins with the words: id quo maius cogitari nequit – “there must be that [thing] the greater than which cannot be conceived.” Anselm concluded that a being who has all the qualities of greatness and who exists must be greater than the conjectural amalgamation of these qualities but who does not exist; therefore, God exists. Anselm stressed the point in his prayer: “So truly thou dost exist, O Lord. My God, that thou canst not be conceived not to exist.” 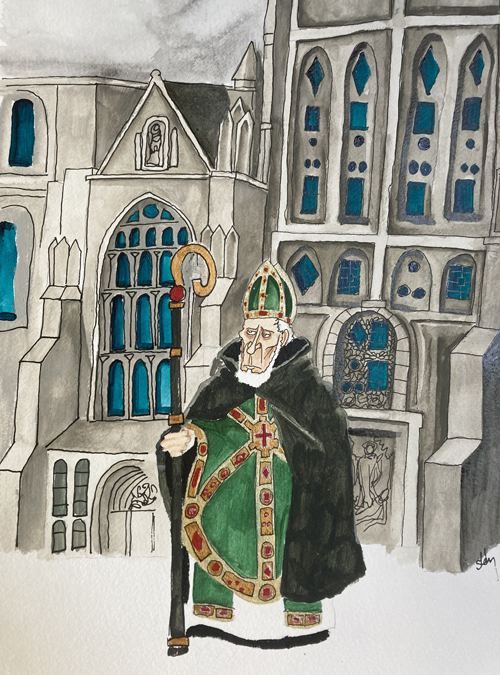 Some of the most renowned logicians of modern times have accepted one or other variety of the Ontological Argument, including Kurt Gödel (1906-1971), the inventor of the Incompleteness Theorem (who, incidentally, deliberately starved himself to death). Even the professional atheist Bertrand Russell (1872-1970) accepted it for a time. As he writes in his Autobiography:

Kant, however, rejected Anselm’s reasoning, famously arguing that existence ‘is not a predicate’. He meant by this that existence is not a contingent property of a thing, like its roundness or blueness can be. The implication of Kant’s position is that we cannot as it were simply conjure things into existence by mere words, as the Ontological Argument might seem to do. In Kant’s own words: “A hundred real thalers do not contain the least coin more than a hundred possible thalers. My financial position is, however, affected very differently by a hundred real thalers than it is by the mere concept of them.”

G.E. Moore (1873-1959) made a similar point, saying ingeniously, “While it makes perfect sense to claim ‘Some tame tigers do not growl’ it makes no sense at all to claim, ‘Some tame tigers do not exist’.” What exactly is it that these non-existent tame tigers do not do? But Gödel commented, “This version of Anselm’s argument breaches no laws of logic, commits no confusions and is entirely immune to Kant’s criticisms.” And other modern philosophers apart from Gödel have accepted the Ontological Argument. Alvin Plantinga (b.1932) has an interesting perspective, borrowed from modern modal logic: “Either God’s existence is necessary or it is impossible. That is, God could not just happen to exist. Clearly God’s existence is not impossible. So it must be necessary. Therefore God exists.”

But perhaps all these ways of considering the Ontological Argument, as fascinating as they are, amount merely to several ways of barking up so many wrong trees? R.G. Collingwood (1889-1943) certainly thought so. For his elucidation of the argument’s meaning and significance he takes us back to Anselm himself. When he first produced his argument, Anselm quoted the book of Psalms, saying, “The fool hath said in his heart. ‘There is no God’.” A monk called Gaunilo wittily replied in a pamphlet entitled On Behalf of the Fool. He wrote that if Anselm’s reasoning was sound, then parallel reasoning would establish the existence of some things that don’t, in fact, exist. His example was of a perfect Lost Island. Such an island can be conceived, but a perfect lost island that actually existed would be more perfect than one which existed only as a concept. Therefore, said Gaunilo, if Anselm was right then there must also be a perfect lost island. In his Essay on Metaphysics (1940) Collingwood comments on this dispute: “If Gaunilo was right when he argued that Anselm’s ‘proof’ of the existence of God proved the existence of God only to a person who already believed it, and if Anselm told the truth when he replied that he did not care, it follows that Anselm’s proof, whatever else may be said for or against it, was sound on this point.” But Collingwood enlarges his explanation:

Most philosophers think Anselm was trying to prove the existence of God. In a sense he was, but his belief in God did not, for him, depend on the validity of his proof. His Proslogion was a prayer asking God, in whom he firmly believed, to enable him to devise an argument to prove it.

What then are we to think? With so many elegant points being made on both sides, as the fairground stallholder said, “You pays your money and you takes your choice.” But for my money at least, Anselm’s argument, and the eight hundred years’ discussion of it that followed, represents one of the most fascinating, long-running topics in philosophy. It is in and of itself a paradigm of philosophy. The Ontological Argument – whichever side you find yourself on – is an example of what, at its best, philosophy is.

Peter Mullen is an Anglican priest. His last cure of souls before he retired was Rector of St Michael’s, Cornhill, in the City of London.