Beyond space and time
God stands over creation
All done, yet to be. 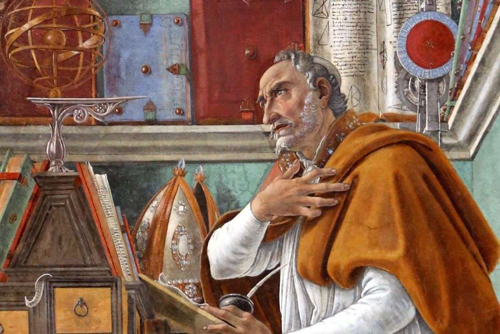 St Augustine is a deeply complex and troublesome figure, at once both sympathetic and repugnant. At an early age he showed he was profoundly sensitive to the suffering of others, whereas as a bishop he was quite willing to persecute heretics, not to mention doom unbaptized babies to Hell.

In his Confessions (400 CE) – considered the first instance of autobiography in Western literature – he candidly talks of his sinful youth, when he wallowed in the fleshpots of Carthage. It was at this time that he was supposed to have offered up to God the dubious but admirably forthright prayer, “Grant me chastity and continence, but not yet.” Then, after enjoying carnal delights (and having a son with his courtesan), Augustine experienced an epiphany and converted to Christianity. There followed a rapid rise through the ecclesiastical ranks until he became Bishop of Hippo (in modern-day Algeria).

Concerned that the sack of Rome by Visigoths in 410 CE was being seen as a punishment for the abandonment of Rome’s traditional gods in favour of Christianity, Augustine penned (over eight years) The City of God (426 CE). This whopping great tome explained why, even if Rome had fallen, the elect needn’t worry, God’s plan for the world is nevertheless being fulfilled.

It’s a sensational read, even if what he’s selling isn’t your thing. Augustine argues God is not a part of space and time, but the creator of them. In this way, looking down upon His creation, God knows everything that will happen. However, from our perspective the future is unknown and undecided, thus leaving room for moral choice. (If you think that God’s foreknowledge and our free will make uneasy bedfellows, you’re not alone.) And so God would have known that Augustine was going to die in 430 CE, just as the Vandals were, well, vandalising Hippo. To be fair to them, they were polite enough to leave his library alone.