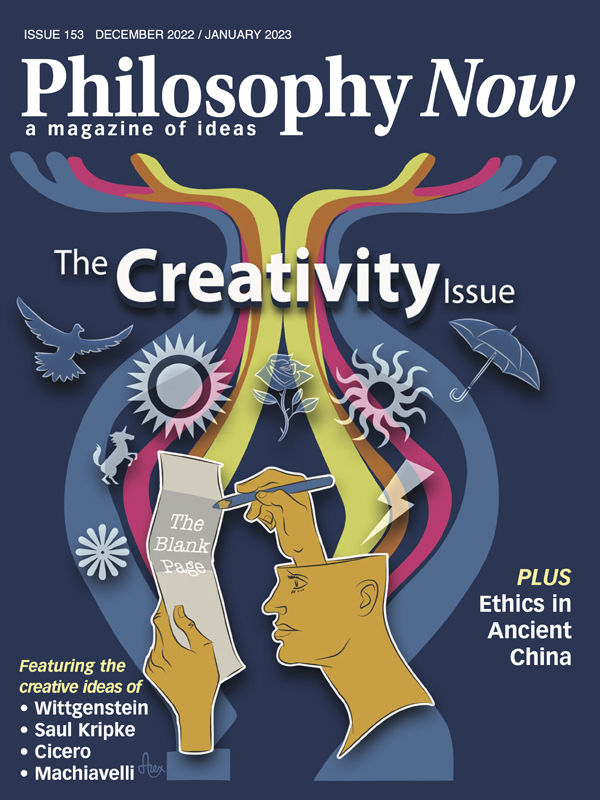 The Philosophy of Creativity

In Praise of Aphorisms

What Am I Doing?

James Gallant, writer, reflects on the psychology of creativity.

Massimo Pigliucci trawls the history of politics to see how closely ethics fits it.

Manon Royet tells us what’s happening in French philosophy, and why you don’t know about it.

David Charles argues that we should not regret our decisions, but should take responsibility for our decision-making processes.

Poetry & Philosophy for the 21st Century

Shaun O’Dwyer takes an unfortunately still relevant look at how to avoid war.

Hilarius Bogbinder considers the inconstant career of the most famous politician-philosopher named after a legume.

What Grounds or Justifies Morality?

Our readers give their reasons, each winning the right to a random book.

Stefan Rinner tells us about Kripke’s theories and why they matter.

Peter Adamson is Professor of Late Ancient and Arabic Philosophy at the Ludwig Maximilian University in Munich. Duanne Ribeiro chats with him about the history of ideas, and the meaning and methods of philosophy.

An Invitation to Navel Gazing

Raymond Tallis requests the pleasure of your company for this most philosophical of gatherings.

Seven Ways of Looking at Pointless Suffering by Scott Samuelson

Doug Phillips arms us against the slings and arrows, as he tries to find a point to pointless suffering.

The Monarchy of Fear by Martha Nussbaum

Chad Trainer explores the politics of fear with Martha Nussbaum.

A fantasy by Martin Gardner.