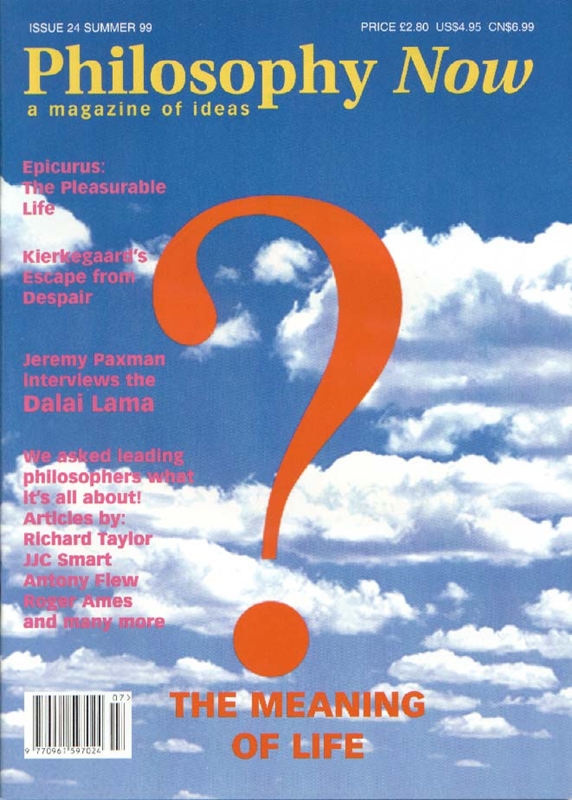 THE MEANING OF LIFE

Can a Life of Child-rearing Be Meaningful?

Sarah Conly on devoting one’s life to another.

In Praise of the Meaningless Life

Bob Sharpe asks if you can have value without meaning (to).

Dominic Kirkham exhorts us to find meaning in the present moment.

The Meaning of Life (I)

The Meaning of Life (II)

Roger Ames on a Chinese approach.

The Meaning of Life (III)

Richard Taylor says that lives are meaningful only if they are creative.

What’s the meaning of all this?

Brenda Almond on the pursuit of wisdom.

Jeff Mason on Kierkegaard’s three forms of life: the ethical, the aesthetic and the religious.

Dane Gordon on the friends of Epicurus.

Kai Hammermeister on the beauty business.

Philosophy where? Win a book in our competition!!!

Andrew Dodsworth asks a few questions about who wrote what.

How are we to Live? by Peter Singer

Michael Williams describes Peter Singer’s attempt to take the point of view of the universe.

The Meaning of Life compiled by John Gabay

Tim LeBon browses an anthology on The Meaning of Life.