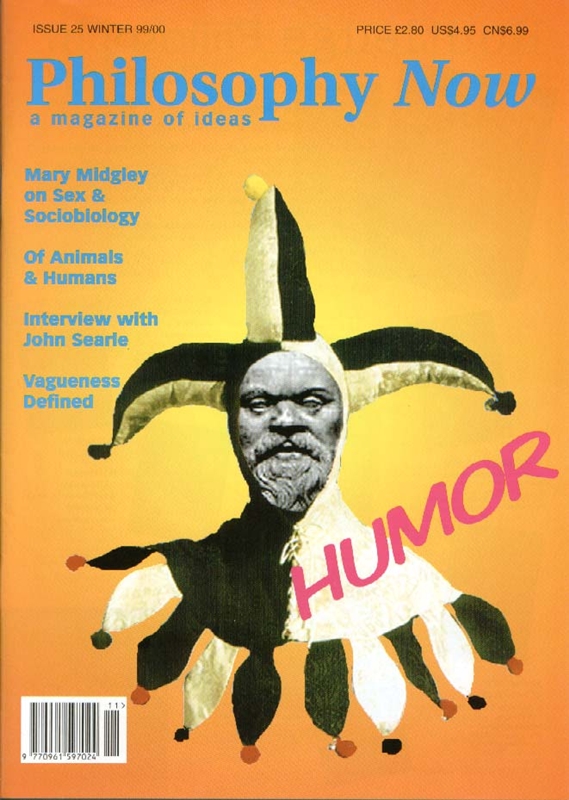 Rick Lewis was at the 3rd Symposium on Field Being and the Non-Substantialistic Turn, August 12-17 1999.

Randall Curren finds that talking about humor is no laughing matter. Especially on national television.

Tim Madigan on some philosophical comedians.

An introduction by Tim Madigan.

Peter Rickman on the unsettling similarities between jokes and philosophy.

Jorge J.E. Gracia on the Significance of the Insignificant.

Terri Murray tells the story of how St. Paul hijacked a religion.

Antoni Diller isn’t one. And he can prove it.

Jane Forsey asks, what makes us so special?

The Origins of Don Giovanni

If our genes are selfish, does that mean that we are too? Mary Midgley explains the facts of life.

Vagueness: an introduction (sort of)

Fred Ablondi tells you Everything You Always Wanted To Know About Vagueness. But not quite.

One of the leading figures in contemporary philosophy, John Searle is the author of many influential books, but thinks that in a way he has just been writing one book all along. In June he visited London, where Julian Moore asked him what it is about.

Intellectual Impostures by Sokal and Bricmont

Robert Taylor cheers to the rafters the attack by Alan Sokal and Jean Bricmont on modern French philosophy’s misuse of scientific language.

Carl Maxim is the Bill Gates of philosophy.