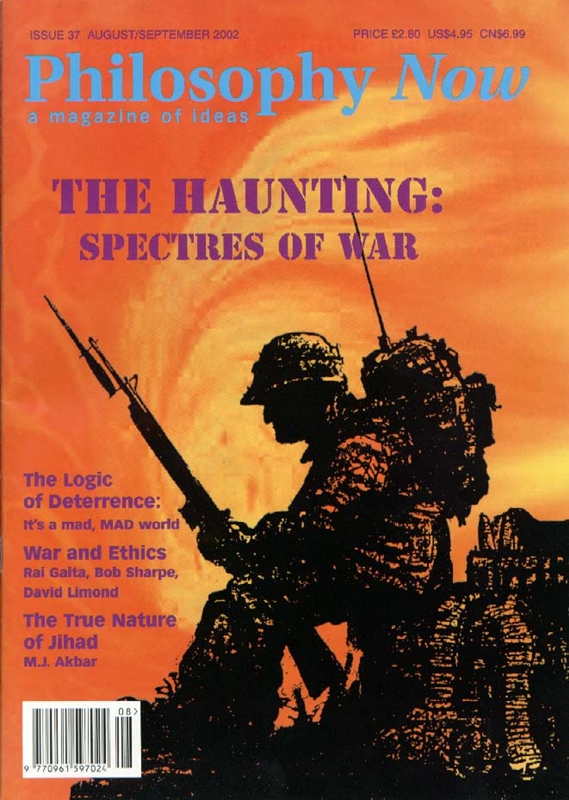 Bob Sharpe asks what it is to die for one’s country.

With the conflict between India and Pakistan reaching a point of crisis, the threat of nuclear war is once again on the minds of many. Duncan Richter, Dylan Suzanne and Robert M. Martin discuss the logic behind the Cold War and the doctrine of Mutually Assured Destruction.

David Limond takes a critical look at arguments in support of war.

The ‘War of Good Against Evil’

Raimond Gaita on racism, religion and the motives of suicide bombers.

Michael Philips on truth and the Correspondence Theory.

Arnold Zuboff replies to his critics.

Should Bertrand Russell’s ‘skirt chasing’ be taken into account when thinking about his moral theories? Stephen Anderson argues that it might, in this reply to Tim Madigan’s criticism of ad hominem arguments.

The Atheist & the Foxhole

The Dialectics of Faith & Enlightenment

Hegel has been enormously influential, but is notoriously difficult to read. In this new section, Peter Benson guides us through a series of typical Hegelian moves from the ‘Phenomenology of Spirit.’.

The Nature of Religious Belief

Chris Bloor replies to ‘Cutting God in Half’ by Nicholas Maxwell.

Karen Adler reports on the ‘Return(s) to Marx’ conference at the Tate Modern in London.

See if you can identify the authors of the following war-related passages.

M.J. Akbar is the editor of The Asian Age newspaper and author of a new book, The Shade of Swords, in which he seeks to clairify the meaning of ‘Jihad’. He recently talked with Philosophy Now.

Closure: A Story of Everything by Hilary Lawson

Hegel: A Biography by Terry Pinkard

Ralph Blumenau immerses himself in a monumental biography of Hegel by Terry Pinkard.

Fritz Lang’s film Metropolis is a classic thanks to its timeless warning about the perils of technological mastery without social justice, says Scott O’Reilly.

Peter Rickman travels through the looking glass in search of some of philosophy’s pitfalls.

A Case of Fire

How Will God Save the Queen?