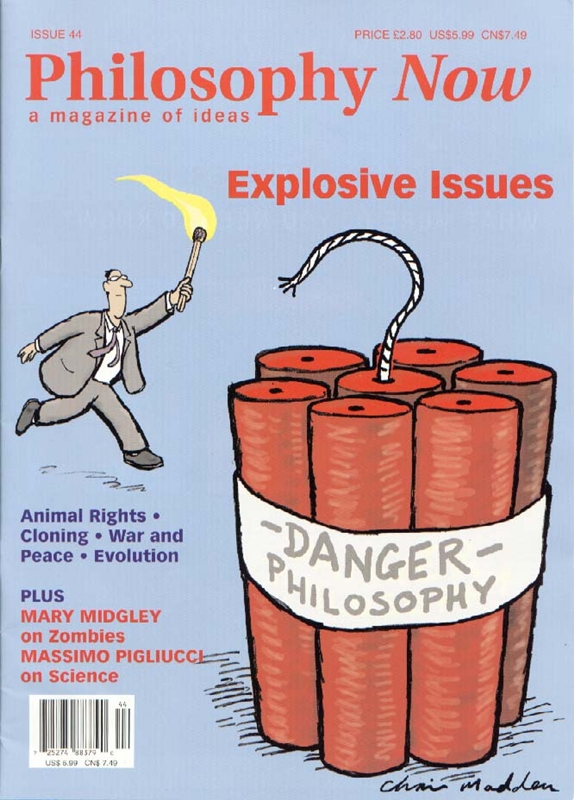 Neill Furr examines the various arguments against human cloning and finds them all flawed. He says we should proceed with caution, but doesn’t think cloning should be banned.

Peter Williams claims that Richard Dawkins is a good writer but a poor logician, and attempts to prove it with examples of some formal fallacies.

David Gamez thinks we need to revise the theory of Just Wars to say when it is and when it isn’t permissible to impose utopia by force.

Confessions of a Rational Animal Liberationist by Jeremy Yunt.

Mark Goldblatt on a medieval debate with modern echoes.

One of the most colourful and engaging of modern philosophers (and of Philosophy Now contributors) is recalled by Robert Holmes, Barry Gan and Tim Madigan.

Nathan Radke claims that Charlie Brown is an existentialist.

Christopher Orlet wanders down literary paths merrily swinging his arms and pondering the happy connection between philosophy and a good brisk walk.

Mary Midgley explains why she doesn’t believe in zombies.

Materialism For… • …and Against • The Real Richard Rorty? • A Phenomenally Pragmatic Point • Death Penalty • Earth: Mostly Harmless? • What about AIDS, eh? • Join the Professionals? • Philosophy & Divination • Minds versus Brains! • The Philosopher as Choreographer

What is Philosophy of Science Good For?

The first of occasional columns on science and philosophy by Massimo Pigliucci.

On Beauty and Being Just by Elaine Scarry

The Power of Ideas by Isaiah Berlin

Ellen Klein reviews a poignant and thoughtful film from her adopted home town of Sarajevo – Remake.

Ronald Lindsay on a novel, if slightly desperate, way of funding philosophical research.