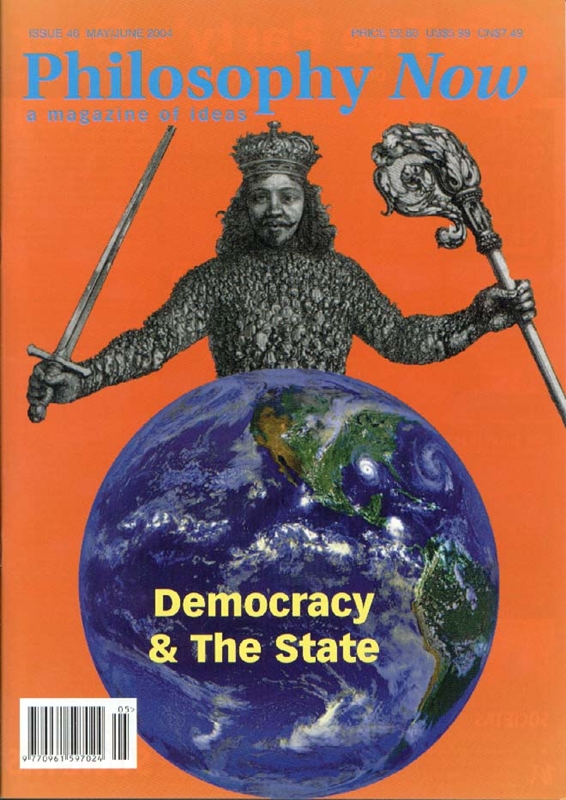 A five-minute tour of some political thinkers and ideas by Anja Steinbauer.

Paul Gregory on How to End Packages and Bundling.

John Capps argues that Senator McCarthy’s anti-Communist purges helped positivism to triumph over pragmatism in American universities in the 1950’s.

Stuart Greenstreet on why global warming won’t be stopped.

Does the Philosophy of Art Have a Mind/Body Problem?

Christopher Perricone says that the short answer is “Yes” and the long answer is this article.

Reflections on Critique and Freedom by Karen Kachra.

Mike Alder explains why mathematicians and scientists don’t like philosophy but do it anyway.

The Case Against the Democratic State by Gordon Graham & Democracy, Fascism and the New World Order by Ivo Mosley

What’s so hot about democracy? Edward Ingram considers two books which call it into question.

The Many Passions of the Christ

Our man with the popcorn and the Aramaic phrasebook Thomas Wartenberg explains why so many people have a problem with Mel Gibson’s flay ‘n’ slay epic, and why so many others think it really is the greatest story ever told.

Another instructive and improving tale by the risque but virtuous Peter Cave.