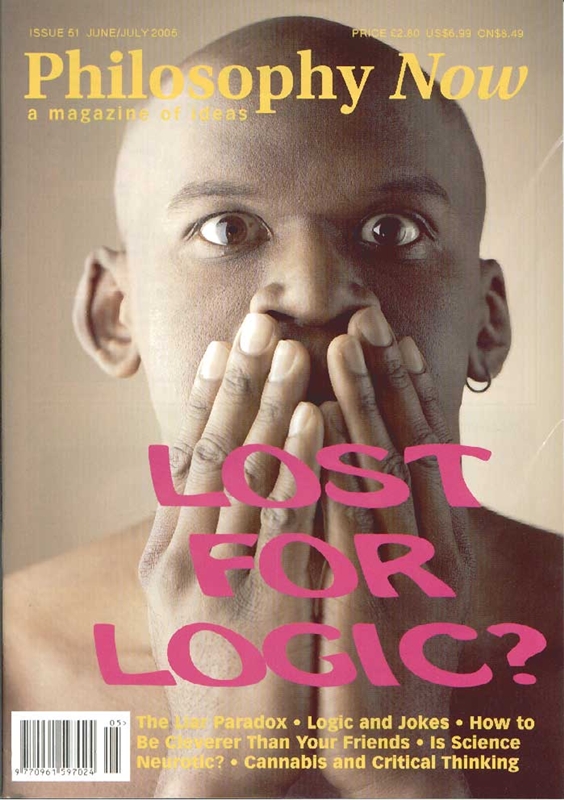 Julia Nefsky on the curiously strong connections between logic and humour.

Robert Davies applies some critical thinking to an old debate.

Part I: Design for a Superbeing. By Mike Alder.

A quick and friendly introduction to symbolic logic by Stephen Szanto.

Neil Lefebvre and Melissa Schehlein give an intuitive solution to the famous Liar Paradox.

Nicholas Maxwell argues that science misrepresents its own core aim and as a result, suffers from self-deception.

Phillip Hoffmann on the importance of the astonishingly improbable.

The Epistemology of Ignorance

Peter Rickman on the crucial importance of context.

Chris Fotinopoulos on growing up to become a philosopher, on good and bad education and on Socratic dialogue in high schools.

Deiradiotes unveils the fifth of his fiendish philosophical crosswords. You may be relieved to know that the answers are available.

Mistakes and Table Legs • Beware of the Triads! • Burning the Library • The Misuse of Language • Species and Families • Some Learned Disputations Upon St Thomas Aquinas • Dworkin’s Death is Philosophy’s Loss • So What Is ‘Natural’?

The Basis of Morality

Tim Madigan on scientific versus religious explanations of ethical behaviour.

On the Other Hand...

The Myths We Live By by Mary Midgley

John Snider ponders time, space and Shania Twain in this review of I ♥ Huckabees.

If Ludwig Wittgenstein had come from Yorkshire, what might his Tractatus have been like? Dr G.E.B. Smith imagines.

The Book of Love

A short story about love by Alistair Fruish.