This issue, edited by Moscow professor Alexander Razin, is based around the 4th Russian Philosophy Congress, a vast international gathering which attracted over 2,000 participants. Philosophy, as one of our contributors points out, is booming in Russia.

Razin has assembled a selection of articles to give us a taste of what is going on in Russian philosophy right now. These include a roundup of the topics discussed at the Congress, two of the talks from the opening session and two articles by American philosophers who travelled to the Congress, giving their impressions. There are also a number of other contributions by modern Russian philosophers on different topics. In addition to all the excellent material which Alexander Razin has gathered, we’ve enlisted journalist Anna Arutunyan to provide an alternative view of Russian intellectual life. Finally, to give some historical context, we’ve interviewed Lesley Chamberlain, who is the author of two books on the history of Russian philosophy.

Back in the 1980s, people in the West thought they knew about intellectual life in Russia. They pictured a monolithic, official Communist ideology pervading many facets of life, directing government policy and dominating scholarly inquiry in the universities, and a persecuted class of creative, dissident intellectuals living in the shadows. Now, as Russia begins to assert itself on the world stage again, few outsiders have much idea what intellectual life in Russia is like.

The end of Communist rule created a unique situation: thousands of highly-trained philosophers instantly decided that their dominant philosophical approach, Marxism, was past its sell-by date. What philosophical direction would they take now? Would they turn to the analytic style of philosophy popular mainly in the English-speaking world, or to continental philosophy, or take some completely different direction of their own? Whichever way they go, their numbers mean that some very good thinkers are likely to bring their critical apparatus to bear on the problems, and this in turn will mean that Russian philosophy will have a big impact on philosophical discourse in the West.

Actually the situation is a little more complex than portrayed above. It isn’t true that thousands of Russian philosophers simply woke up one morning in 1991, put a blank piece of paper in front of them on their desks and said “what next?” As Tim Madigan recalls in his article on p.7, Russian thinkers under Communism were frequently wrestling with a wide range of philosophical problems, but were simply compelled for political reasons to apply a thin veneer of Marxism to their conclusions. So it wasn’t as if they were starting with a completely blank slate after the fall of Communism.

They haven’t all headed in the same philosophical direction since then, either. Some sense of the current interests of Russian philosophers can be gained from the Congress report on p.9, which summarizes very briefly what the main topics of discussion were. From this you can see that some are certainly interested in the problems (consciousness etc) which concern analytic philosophers. There also seems to have been a big interest in postmodernism. Additionally, the Russian religious philosophers of the 19th and early 20th century, banished by the Communists, are now being studied again. The interplay of these different schools of thought provides the conditions for something really interesting to take place. We will definitely keep an eye on what is happening in Russian thought and are very happy that Alexander Razin, in Moscow, will be continuing to keep Philosophy Now readers abreast of developments. You’ll read it here first!

We are delighted to announce that Philosophy Now’s UK editorial board has a new member, called Marcel. His duties initially are limited to sleeping and smiling a lot, but we’ll have him editing articles as soon as he’s old enough to sit up and hold a pen. 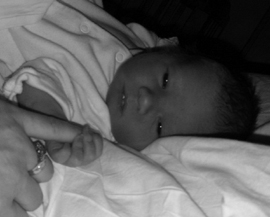 An American in Moscow

Knowledge & Wisdom in the Globalizing World

Motherland: a Philosophical History of Russia by Lesley Chamblerlain