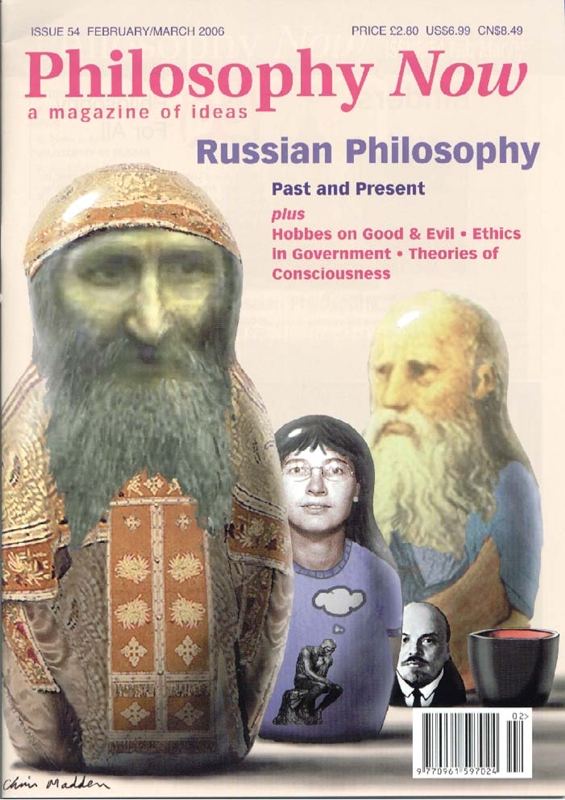 Anna Arutunyan on the lack of agency in contemporary Russia.

An American in Moscow

Tim Madigan reports from the 4th Russian Congress of Philosophy.

Knowledge & Wisdom in the Globalizing World

In his opening address to the Russian Philosophy Congress, Victor Sadovnichiy spoke of sagacity and sophiology.

Alexander Razin considers why people act morally (when they do).

Vladimir Mironov on semiotics and postmodernism in a shrinking world.

Tim Delaney shares some observations from his trip to Moscow for the 4th Congress of Philosophy.

So what are the problems that interest Russian thinkers today? Anna Kostikova and Elena Kosilova answer this question with a roundup of the topics discussed at the biggest gathering of Russian philosophers in history.

Academician Abdusalam A. Guseinov on pacificism and the perspective of the infinite beginning.

Miriam Abbott says the Fibonacci series tells us nothing about the natural world.

Richard Baron tries to be good in government.

Hobbes on Good and Evil

Craig Ross on how a philosopher with few illusions made a mistake.

How To Be Conscious: Mind & Matter Revisited

What exactly is consciousness? Roger Caldwell looks at the current ideas of three leading figures in philosophy of mind, as revealed in their latest books.

Our eighth crossword concocted by the cryptic and always ingenious Deiradiotes.

Lesley Chamberlain is the author of Motherland, a book about the history of Russian philosophy from the 19th century onwards, and has another book on the subject coming out soon. Rick Lewis asked her about her books and about Russia’s philosophical past.

Real Epistemology, or On Being Your Own Scientist

Motherland: a Philosophical History of Russia by Lesley Chamblerlain

The Future of Hegel by Catherine Malabou

What are the dangers when a director monkeys around with a classic film? Thomas Wartenberg on the remake of King Kong.

Miranda and the Meaning of Life