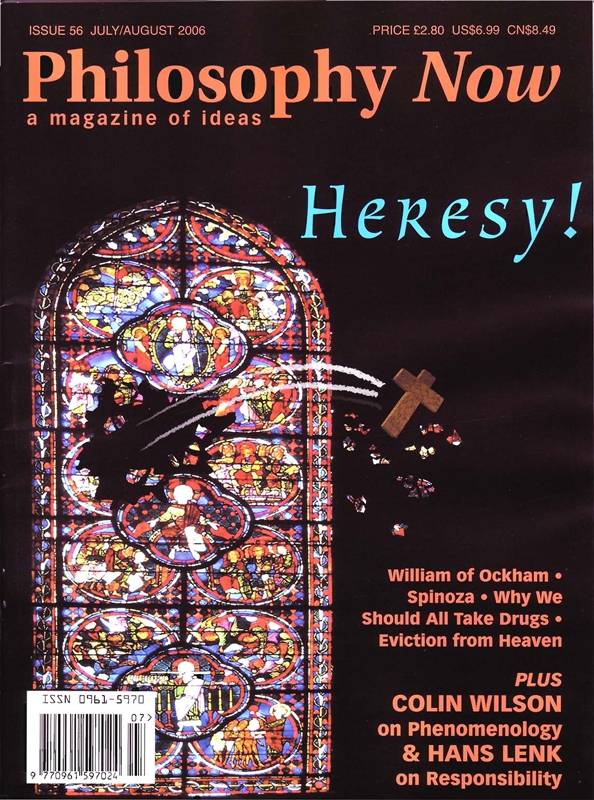 Fundamentals, Islamists and the West

Imadaldin Al-Jubouri considers how some Muslim fundamentalists justify their aggressiveness – by misreading the Qur’an, among other things.

John Donnelly reminds us that people are only tenants in Heaven by the grace of God.

Colin Wilson explores the more provocative side of existentialism.

Three hundred and fifty years ago, Spinoza was excommunicated. This affords Peter Cave the excuse to remind us of this most tolerant philosopher – of his life, metaphysics and humanity.

The End of Suffering

Pleasure for the People! Katherine Power considers whether there should be more opiates for the masses (including opium?), but settles for nuts and seeds.

The Truth about Heresy?

Grant Bartley lays down the law in favour of the ‘right’ sort of heresy.

William of Ockham: Defending the Church, Condemning the Pope

Ian Smith on why Ockham thought the Pope wasn’t a Catholic.

Biotechnologies: Tweaking Here, Tuning There. Is that all we need?

Following on from last issue’s focus on medical ethics and bioethics, Inmaculada de Melo-Martín says we aren’t thinking deeply enough about what the problems with bioethics really are.

William Lewis tells us the Graeco-Roman way to keep a stiff upper lip.

Our tenth tendentious trial of tenacious talent tacked together by the tongue-twistingly terrifying Deiradiotes.

Lisa Kemmerer agrees with Carol Adams about some of the subliminal assumptions advertisers use to sell their wares.

Wittgenstein and Judaism by Ranjit Chatterjee

Colin Bartie digs the countercultural theme in Slacker and other films by Richard Linklater.

Adebowale Oriku tells a story about a man who finds it difficult to tell a story.