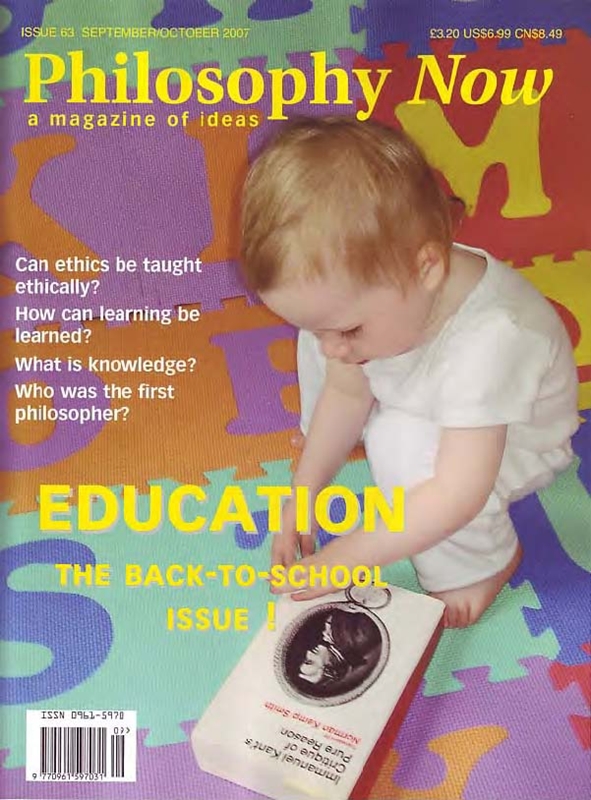 Rebecca Glass on the importance of fables of ‘the really real world’.

Of Adolescents and The Aristotle

Graham Haydon thinks about what it is to think about moral education.

Teaching Philosophy vs Teaching To Philosophise

Pablo Cevallos Estarellas reviews the developments that caused professional to triumph over amateur philosophy in education, and proposes a way forward.

What is it to be a Human Knower?

Jan Derry wants to know what it is to know.

Being and Time – The Musical!

Grant Bartley sees the funny side of Martin Heidegger.

Peter Cave has a new book just out, of philosophical puzzles old and new. Here, Peter tells the tale of Logical Lo and her reasoning.

Following on from our last issue, Raymond Tallis defends personal identity from those who say the self is an illusion.

The Gettier Problem No Longer a Problem

Lukasz Lozanski claims to know why Edmund Gettier was unjustified.

Who Started All This Philosophy Business?

Carl Murray reports on a heated argument in Hades.

Our seventeeth sexy set of sophisticated symbols stirred and sorted by Deiradiotes.

Fieldnotes From The Borderlands

A Political Philosophy: Arguments for Conservatism by Roger Scruton

The Politics of Education

Judith Suissa considers the intersection of political philosophy and philosophy of education in Alan Bennett’s new film The History Boys.