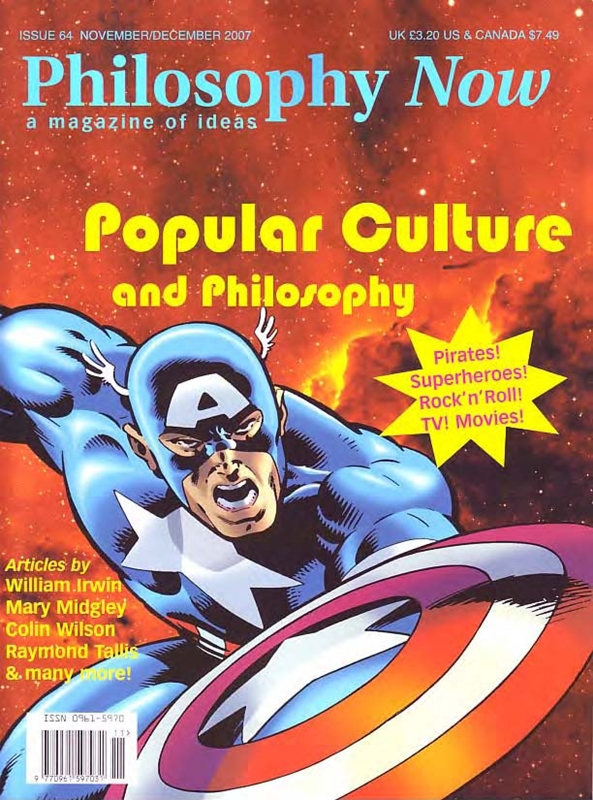 Operation Rebirth: Captain America and the Ethics of Enhancement

Major Todd A. Burkhardt considers under what circumstances it would be morally right to bioengineer super-soldiers.

Tim Delaney sets the scene for our philosophical consideration of popular stuff.

The Piratical Philosophy of Freedom

David White hoists his mainbrace and shivers his timbers.

We Get To Carry Each Other: U2 and Kierkegaard on Authentic Love

Mike Austin listens to Bono while reading Kierkegaard, and discovers that they have the same soul.

A Plague On Both Their Houses

Mary Midgley thinks creationists and evolutionists need to overcome the bewitchment of their own thinking and learn how to talk to each other.

Identity and Freedom in Being and Nothingness

Stephen Wang continues our debate on these essential aspects of being human by considering what Jean-Paul Sartre had to say about them.

The Unthinkability of Philosophical Thoughts

Raymond Tallis thinks the deeply unthinkable, as hard as he can.

Is This Some Kind Of Joke?

John Shelton Lawrence reviews the genre of ‘and philosophy’ books.

Pi and the Movie Mind

A number of recent films deal with mathematics and mathematicians. Can we learn something from them or are they misleading? Peter Stone investigates.

Grant Bartley! investigates the film as a distillation of the man.