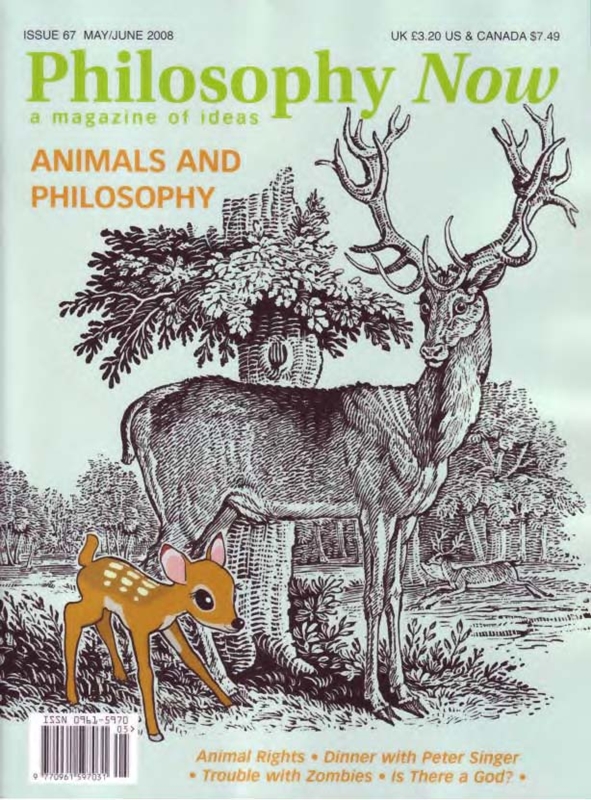 “I knew him by his voice”: Can Animals Be Our Friends?

Stephen Clark examines how far Aristotle’s concept of friendship might apply to animals, among themselves and between us and them.

Charlotte Laws cautiously chows down with the Defender of Animals.

Angus Taylor argues that to be consistent, we must either exclude some humans from the moral community, or else include at least some animals.

Plato is my dog, yo!: Dogs, Love and Truth

Jeremy Barris enlists the help of Plato, Ortega and pragmatist philosophy to argue that love at its deepest is our connection with ultimate truth, and that this connection is found in our love for our dogs.

Did Duchamp’s Urinal Flush Away Art?

Roy Turner scorns the fact that after Duchamp, critics have questioned the status of ‘traditional’ Western art, making the act of designation the sole determinant of art.

In Defense Of Dueling

Ryan Ruby intellectually attacks, feints and parries in favour of legally reinstating the duel as a means of settling personal disputes.

Rebecca Hanrahan says that just because you can imagine zombies doesn’t mean they’re possible, or that they can tell us anything about consciousness.

The Wood That Finds Itself A Violin

Is There A God?

The following readers’ answers to this central philosophical question each win a random book. The harvest was abundant, unsurprisingly; just sorry we couldn’t fit you all in. The votes were, loosely, Yes: 52%, No: 31%, and Don’t Know: 17%. So we’ll start with a ‘Yes’.

It Shouldn’t Happen to a Philosopher

Fiona Dalzell finds it hard being a philosophical vet.

Our twenty-first frenzy of fiddled philosophical facts fantastically forced into a frame by Deiradiotes.

Turning The Tables: We Matter Because We Are Animals

From Loving To Wolfing

Peter Cave toys with love, sex and other objects.

Raymond Tallis asserts the truth about the truth.

Capers in the Churchyard: Animal Rights Advocacy in the Age of Terror by Lee Hall

Horton Hears A Who!

Todd Walters is delighted to announce that the roles of Socrates and Galileo will be played by Horton and the Mayor of Whoville respectively.