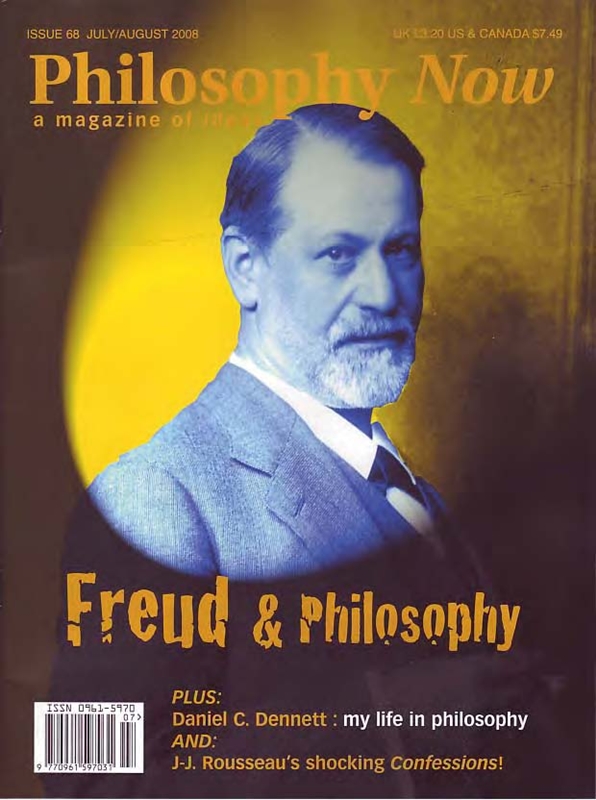 Matthew Pianalto looks at the difference between psychological and philosophical concepts of happiness.

Cathal Horan analyses Freud through the eyes of Hegel and Schopenhauer.

Eva Cybulska on Freud’s unconscious debt to Schopenhauer and Nietzsche.

Jeffrey Gordon reflects on 9/11, and sees that it didn’t wake us.

The Full Revelation of the Self: Jean-Jacques Rousseau and the Birth of Deep Autobiography

Peter Abbs recounts how Rousseau undertook a psychological self-examination a century before psychoanalysis.

Melissa Shew chances to wonder about the influence of doubt and human error in our lives.

What makes a philosopher? In the first of a two-part mini-epic, Daniel C. Dennett contemplates a life of the mind – his own. Part 1: The pre-professional years.

The Psychoanalysis of Soccer

Stephen Longstaffe forwards an analysis by Marcel Sturrock, Professor of Psychoanalytic Studies at Watt University College (motto: “Watt U.C. is what you get!”), and the author of This Game Which Is Not One Half, Trevor.

Ain’t Nobody Here But Us Chickens

Tim Madigan presents a symbol most fowl for philosophy.

Is Science Going To End?

The Professor of Data-Lean Generalisations

Minds and Computers: An Introduction to AI by Matt Carter

Rudolf Steiner: An Introduction to his life and work by Gary Lachman

John Lanigan tunes into Rudolf Steiner thanks to Gary Lachman.