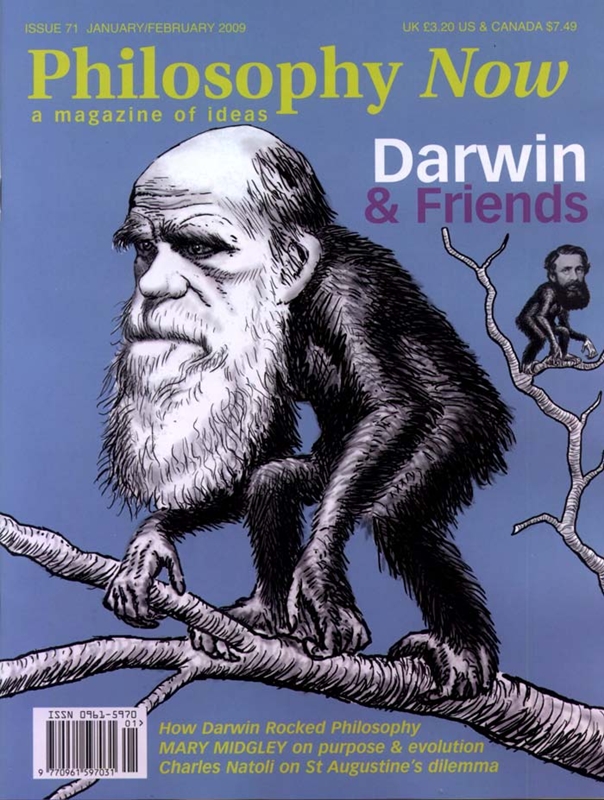 Nature Red in Tooth and Claw

Sherrie Lyons revisits Evolution and Ethics by Thomas Henry Huxley, Darwin’s most energetic defender and the coiner of the word ‘agnostic’.

Mary Midgley meditates on mind and meaning among the mutations.

Tim Delaney relates how Herbert Spencer, inventor of the phrase ‘survival of the fittest’, originally applied evolutionary thinking to human society and culture.

Massimo Pigliucci recounts the history of the theories of evolution, and asks whether evolutionary biology has ever shifted paradigms.

Augustine’s Choice: The Lord of Light or the Light of the Lord?

Charles Natoli considers whether St Augustine had any better reason to convert to Christianity than remain a Manichean.

Paternalism and the Law

Barbara Hands considers whether it is ever right for the law to limit your freedom of choice and action, for your own good.

Up The Nile With A Child: What the Sphinx had to say…

Artemis Pittas and Rafael Guzman take a trip through time and space on a boat.

Welcome To My Philosophy Class

Lecturer Wayne Buck has written a letter to his students explaining what philosophy is, and how to do it.

Religion vs Science Preempted • The Spray Can of God • Be Not Nice to the Nasties • Two Perfect Letters • Probably Philosophy • Don’t Believe In Me • Be Happy Together • Right to Coerce • How To Do Philosophy?

Tim Madigan on how Darwin influenced the Pragmatist.

Mysterious Loss, or Something About a Body

The Importance of Living by Lin Yutang

Mark Cyzyk finds out how to be a loafing scamp.

Kurt Keefner argues that Americans have had enough of Dick Meyer’s Pragmatic medicine.

Floris van den Berg watches The Open Society and its Enemies, the movie.