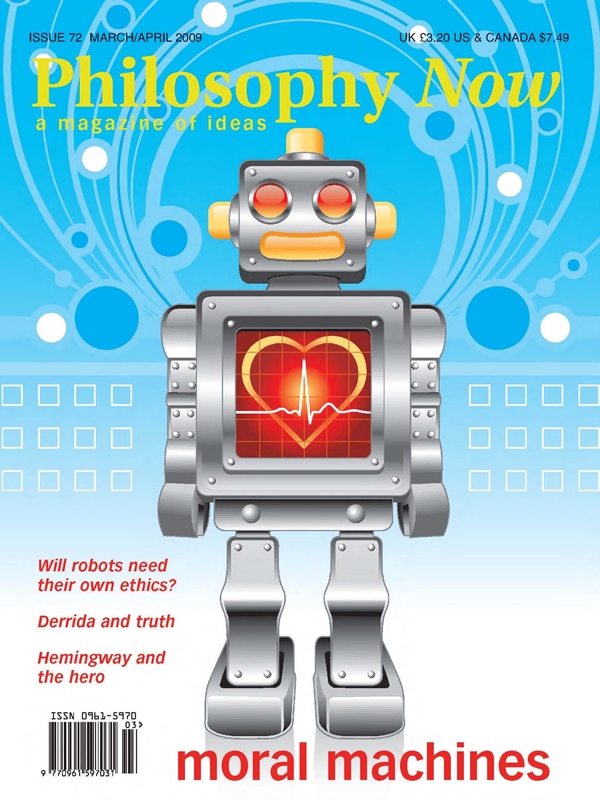 James H. Moor defines different ways in which machines could be moral.

Susan Leigh Anderson and Michael Anderson relate how their attempts to build ethical machines have advanced their understanding of ethics.

Thomas M. Powers on how a computer might process Kant’s moral imperative.

Wendell Wallach tells us what the basic problems are.

Will Robots Need Their Own Ethics?

Dawn Starin reports on the state of colobus civilization in a small Gambian forest.

Hemingway and the Hero

L.A. Rowland campaigns to instate Ernest Hemingway as a philosopher-hero.

The Dragon: Memes, Culture and Evolution

In a follow-up to last issue’s focus on Darwin, we have two articles looking at memes, supposed ‘units of cultural transmission’. First, Daria Sugorakova explores the concept of memes by pondering how the idea of dragons evolved.

Mary Midgley’s Meanings • Good or Nutter? • Social Survival • The Evolution of Stupidity • Cosmological Dispute Continues • More Probably • What Do You Call A Collection Of Solipsists? A Contradiction • Cleanliness Next To Evil? • Person Holding Forth

RUR or RU Ain’t A Person?

Tim Madigan leads the rise of the robots.

I Kid You Not: Knowingness and Other Shallows

Kurt Salaman cheers himself up by considering Karl Jaspers’ views on death and the experience of the eternal in life.

Transcendence and History by Glenn Hughes

Daniel Fernandez gets to know Wilfrid Sellars, US Chief of Epistemology.