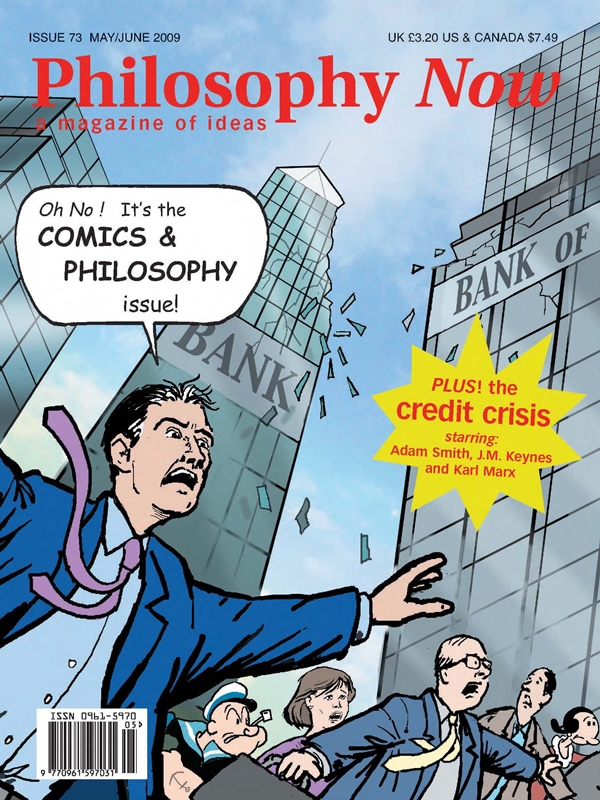 The Spirit of Comics

John Shelton Lawrence asks analyser of comics and the former editor of the Spider-Man range of titles what makes a superhero, philosophically speaking.

Yahia Lababidi stoically responds to the crunch in Daoist fashion.

Mike Fuller on the circular cause of the credit crunch.

The birth of his son forces Miguel Martinez-Saenz to find out if being philosophical helps when it really matters.

Jeffrey Gordon wonders what it would mean to have meaning.

What Would Make The Best Society?

Frank McLaughlin has worked on wellknown American newspaper strips including Nancy, Brenda Starr and Gil Thorp, and was a regular inker for Marvel and DC. His latest project with long time collaborator Dick Giordano is the graphic novel White Viper, which can be seen at ComicMix.com. He also teaches at Paier College in Connecticut. Jeff McLaughlin talks to him.

Michael Uslan is the executive producer of the Batman movies and is bringing other characters to the big screen. He donated his 45,000 comic book collection to Indiana University as a ‘thank you’ for his education. Jeff McLaughlin talks to him.

Tim Madigan on aesthetics and identity in American Splendor.

Why I Am An Atheist

Education’s End: Why Our Colleges And Universities Have Given Up On The Meaning of Life by Anthony Kronman

Soon I Will Be Invincible by Austin Grossman

Nick DiChario finds out what it’s like to be the bad guy.

Alan Brody considers whether Socrates really was a philosophy hero.