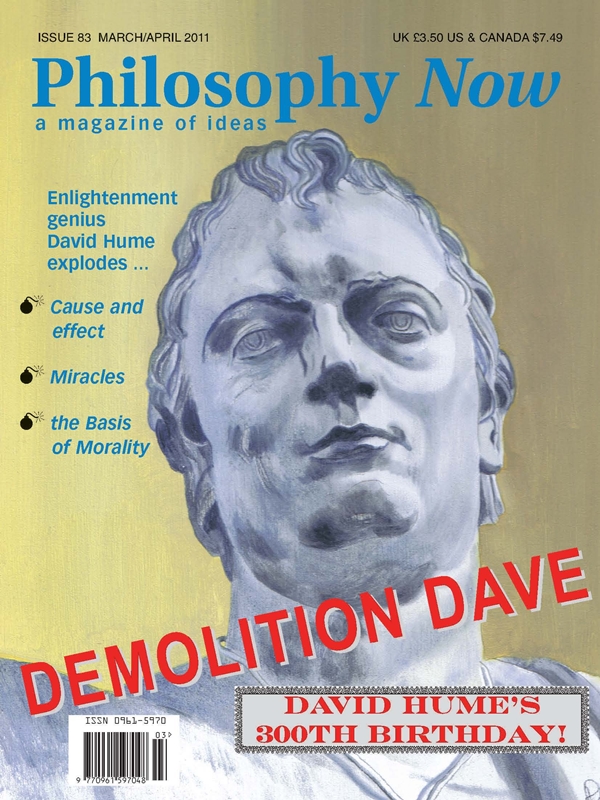 Howard Darmstadter looks at the life and legacy of the incendiary tercentenarian.

Hume on Is and Ought

Charles Pigden considers Hume’s famous claim that you can’t deduce an ‘ought’ from an ‘is’.

Grant Bartley investigates what psychoanalysis has to say about the relationship between mind and brain, and finds the importance of distinguishing our concepts.

Frank S. Robinson stands up for the free market.

Our Morality: A Defense of Moral Objectivism

After our recent ‘Death of Morality’ issue, Mitchell Silver replies to the amoralists.

Our thirty-seventh feast of the factually fantastic, fitted foresquare by Deiradiotes.

The Heart Has Its Reasons: An emotional tribute to Robert C. Solomon

The Soup and The Scaffolding

Raymond Tallis finds some scaffolding in his soup.

Eva Cybulska is in two minds over a new Nietzsche biography.

Justice: What’s The Right Thing To Do? by Michael Sandel

Phil Badger is out for Justice.

The Man Whose Face Disappeared

What is it like to lose your identity? Find out in this eldritch parable by David Carr.

This 29th April is the 60th anniversary of Wittgenstein’s death. Neven Sesardic humorously celebrates his life.