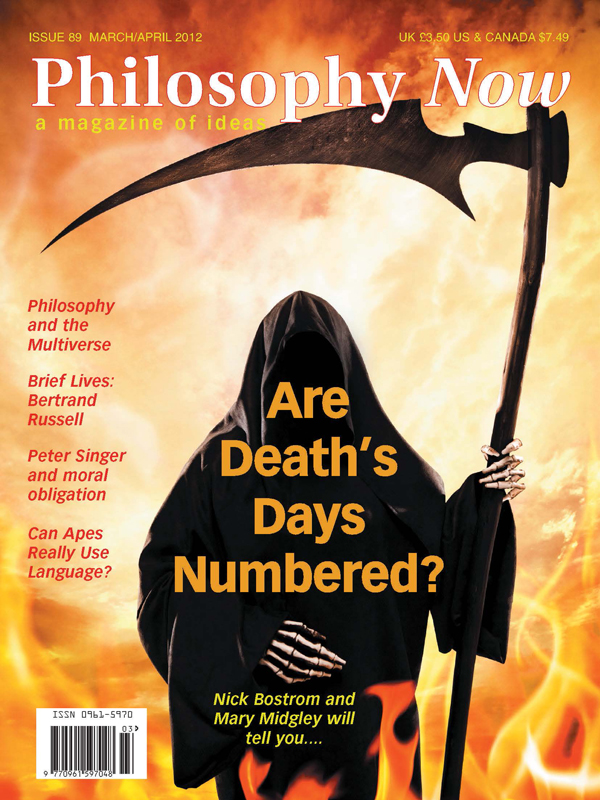 The Fable of the Dragon-Tyrant

Nick Bostrom tells us a philosophical parable about death.

Death and the Human Animal

Are There Duties To The Dead?

In Defence of Deciding to Die

Alex Carley looks briefly at the role of reason in the euthanasia debate.

Peter Singer Says You Are a Bad Person

Howard Darmstadter shows us why the Australian abnegator is wrong.

We report on the magazine’s 20th anniversary celebration at London’s Conway Hall, where Martin Midgley gave this speech accepting Philosophy Now’s first Award for Contributions in the Fight Against Stupidity on behalf of his mother, Dr Mary Midgley.

Shudong Chen communicates about the importance of communication.

J’aime Wells is an ape talking about the possibility of apes talking.

Tim Wilkinson on the physics & philosophy of parallel universes.

Alistair MacFarlane reveals paradoxes in the long life of the third Earl Russell.

Menno Lievers tells us about the ideas and life of an influential British philosopher.

Sustaining The Argument • Putting The ‘Me’ In Meaning • Pieces of Minds/Brains • Free Won’t? • Civil Wars Of Words

Raymond Tallis engages with the dregs of philosophy.

A Philosophy of Boredom by Lars Svendsen

Doctor Who and Philosophy

Massimo Pigliucci searches time and space to reveal the philosophy of Dr Who.

The Beginning of Infinity by David Deutsch

Alistair MacFarlane finds himself in the foothills of infinity.

Sean Gittins has a different view of film, courtesy of Jean-Luc Godard.

Jean-Paul & Simone In The Digital Age