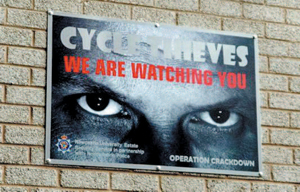 Jean-Paul Sartre argued in his masterwork Being and Nothingness that we, as human beings, can become aware of ourselves only when confronted with the gaze of another. Not until we are aware of being watched do we become aware of our own presence. Professor Daniel Nettle must have had Sartre’s words in mind when devising a two-year experiment at Newcastle University which found that cycle racks with posters of eyes pasted above them had 62 per cent fewer thefts than previously. During the same period those racks without eyes saw a 63 per cent increase in theft. Prof Daniel Nettle remarked “Images of eyes can have a big impact on behaviour. A strong possibility is they work by making people feel watched.” The idea has now caught the interest of the British Transport Police who, with the train company C2C, are testing the theory at stations on a route between London’s Fenchurch Street station and Southend in Essex.

Cynics noted that the posters at Newcastle University read “Cycle thieves: we are watching you” and carried a police logo – which may have been interpreted by cautious bicycle thieves as a warning of CCTV camera surveillance.

A brave new initiative aims to bring more philosophy into the public sphere in Pakistan, through courses aimed at the general public. The School of Modern History and Philosophy was launched in the federal capital Islamabad in early May. Open to interested people from all walks of life, the school will hold fortnightly sessions over the next six months. The current series of lectures deals with philosophers such as Descartes, Spinoza and Hobbes, as well as concepts related to causality, epistemology and the validity of knowledge. The veteran writer and intellectual Ashfaq Saleem Mirza gave the inaugural lecture, setting the scene by discussing socio-political history before René Descartes, the French philosopher considered as one of the founders of modern philosophy. Mirza remarked “It is difficult to introduce new ideas and theories, because they challenge the established order.” The school was opened with the support of the Friedrich-Ebert Stiftung, a German non-profit organisation that has worked in Pakistan since the 1980s in the fields of ‘democracy promotion, labour relations and international dialogue’. The Resident Director of FES-Pakistan, Philipp Kauppert, said they hoped that “this will be a space that goes beyond the day-to-day questions to connect the political reality with the underlying, deeper philosophical questions.”

Not everyone approves of Enlightenment rationality. During the recent Pakistan general election campaign, local Taliban spokesman Ehsanullah Ehsan dismissed a call from religious scholars for citizens to vote and justified a series of attacks on secular parties, which killed or maimed numerous people, by telling The Express Tribune newspaper that Pakistan “came into being under the banner of an Islamic doctrine, while elections are based on a secular doctrine. The two are contrary to each other because Islamic laws and values come from Allah Almighty, while the secular doctrine comes from Rousseau, Kant and Bentham.” 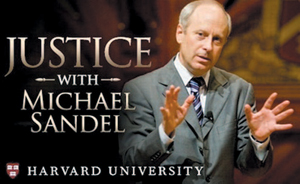 Well-known political philosopher Michael Sandel has taught a very popular course on Justice at Harvard University for many years. Recently this has been developed into a MOOC – a Massive Open Online Course consisting of videoed lectures and questionnaires, and made available on license to students at other universities. MOOCs produced by elite universities are currently proliferating like bunny rabbits, but this one has provoked an open letter of protest to Professor Sandel from the Philosophy Department of San Jose State University. This will add fuel to a growing debate as to whether MOOCs are truly beneficial to students or whether such courses might, as the letter claims, “compromise the quality of education, stifle diverse viewpoints and lead to the dismantling of public universities.” The letter reflected the concern of many university faculties across the United States that the loss of individual interaction with students would be damaging. The philosophy professors also fret that the use of such material would reduce them to the equivalent of teaching assistants.

Administrators at San Jose State University rejected the suggestion that they had pressured their academic departments to use MOOCs, saying they were simply advising of the availability of such material and would not tell faculty what to use. Dr Sandel responded sympathetically to the letter saying “My goal is simply to make an educational resource freely available – a resource that faculty colleagues should be free to use in whole or in part, or not at all, as they see fit … The worry that the widespread use of online courses will damage departments in public universities facing budgetary pressures is a legitimate concern that deserves serious debate.”

Philosophy All Through the Night

The Institut français in London will be hosting My Night With Philosophers, a whole night of philosophy, performances and music, on 7 June. Full details at: www.mynightwithphilosophers.co.uk.

The second Philosophy Now Festival will take place in London’s Conway Hall on September 8th 2013. The all-day festival will include talks, debates, workshops, and philosophical games for the whole family. For more details please visit: philosophynow.org/festival.