Katharine Merow asks what’s buzzing around in the head of the Sphex wasp.

Folks who think about thinking for a living have a favorite genus of wasp. These cognitive scientists and philosophers of mind dig those insects whose scientific names begin with Sphex: Sphex ichneumoneus, Sphex diabolicus, and what I presume to be the king of them all, Sphex rex. Laymen, who prefer English descriptions of insects to the invocation of Linnaean Latin, call these six-legged stingers ‘digger wasps’ or ‘cicada killers’. There are over 130 known species. 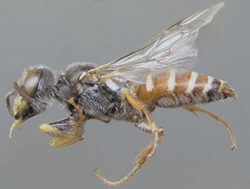 They have delicately-furred thoraxes that taper to the original wasp waists. The sun penetrates their fragile wings, glints golden off their stippled heads, lends a reflective sheen to their compound eyes. The insects excavate underground burrows as tunneled and chambered as the pyramids at Giza. They stalk, attack, and deal slow, numb death to crickets, katydids, cicadas. This digging and killing by which the wasps distinguish themselves is woman’s work, undertaken in preparation for egg-laying, so people who study Sphex most appreciate the females.

In Mechanical Man: The Physical Basis of Intelligent Life (1969), Dean Wooldridge describes the expectant mother at her gene-propagating labors: “When the time comes for egg laying, the wasp Sphex builds a burrow for the purpose and seeks out a cricket which she stings in such a way as to paralyze but not kill it. She drags the cricket into the burrow, lays her eggs alongside, closes the burrow, then flies away, never to return.” An absentee parent, yes; but one who has left her children well provisioned. The newly hatched grubs will gorge themselves on a feast of undead cricket.

Intellectuals of Wooldridge’s stamp summon little pity for the immobilized crickets stockpiled as baby food. Wooldridge only cares about the apparent deliberateness of the adult wasp, and wants to question the human tendency to see purpose in Sphex’s elaborate behavior. He writes: “The wasp’s routine is to bring the paralyzed cricket to the burrow, leave it on the threshold, go inside to see that all is well, emerge, and then drag the cricket in. If the cricket is moved a few inches away while the wasp is inside making her preliminary inspection, the wasp, on emerging from the burrow, will bring the cricket back to the threshold, but not inside, and will then repeat the preparatory procedure of entering the burrow to see that everything is all right. If again the cricket is removed a few inches while the wasp is inside, once again she will move the cricket up to the threshold and reenter the burrow for a final check.” So Sphex is sort of robotic. “On one occasion,” Wooldridge reports, “this procedure was repeated forty times, with the same result.” At least what the digger wasp lacks in acuity she makes up for in doggedness.

Cognitive scientist Douglas Hofstadter has coined a noun to characterize this apparently mindless persistence: sphexishness. He uses the word to describe the sort of repetitive, unimaginative behavior he identifies as the very antithesis of inventiveness. I know of no evidence that contradicts Wooldridge’s or Hofstadter’s assessment of the insect’s mental sophistication. I do cringe at the hubris of it, though – the presumption that man, endowed with consciousness and intelligence and the all-illuminating power of the scientific method, can necessarily divine what goes on in the mind of a wasp – a creature wholly other, and thus conceivably less than totally fathomable to us. “The wasp never thinks of pulling the cricket straight in,” Wooldridge declares. But how can he be so cocksure? Maybe Sphex isn’t so much mindless, as paranoid. Moments spent retrieving a relocated insect could allow a predator to duck into the unwatched burrow; and with meddlesome scientists about, a mother can’t be too cautious. Relax your guard after thirty-nine burrow sweeps, and it’ll be foregoing the fortieth check that gives your enemy his chance. Perhaps the wasp is thinking, “They’ve pegged me for a careless parent. I’ll show them!” – defiant even in the looming shadow of her human observer.

I think of Sphex while at work one afternoon. In the bathroom, mind abuzz with something thorny and engrossing, I pound a dollop of soap from the reluctant dispenser. As the pink liquid pools in my palm, a corner of my whirring brain registers its pearly sheen. Then, at the sight of a soiled paper towel in the basin in front of me, I thrust my hand beneath the metallic gooseneck over a thankfully cleaner basin. The fingers of my other hand reach for and make contact with a circle of chrome, and apply pressure. And there I am, looking down in exasperation at a hand now cupping a second, and wholly unnecessary, squirt of soap. I have dispensed it without thinking.

In light of this experience I dream up an alternative explanation for Sphex. Maybe she’s neither an automaton nor the epitome of wariness. Maybe Sphex is a head-in-the-clouds intellectual – a philosopher who performs the humdrum tasks of daily life on autopilot while concentrating her mental energies on the contemplation of weightier topics. If Sphex never thought of just pulling the cricket into the burrow, maybe it was because she wasn’t thinking about crickets or burrows at all: perhaps she was formulating a Unified Field Theory, solving the problem of evil, or (and this is my favorite possibility) pondering a waspish analogue of Thomas Nagel’s ‘What Is It Like to Be a Bat?’

In that essay, Nagel argues the impossibility of “extrapolat[ing] to the inner life of a bat from our own case.” We might be able to imagine what it would be like for a human to behave like a bat, Nagel says – to fly and echo-locate and sleep hanging upside-down – but the character of our experience prevents us from knowing what it is like for a bat to be a bat.

So maybe, as scientists tire and taunt her, what Sphex is thinking is this: “Can I ever understand what it is like to be two-legged? Waistless? Earthbound, like them?” – but in wasp words, and colored by wasp sensibilities. Sensibilities I couldn’t imagine in forty flights of fancy.

Katharine Merow is a Washington, DC based writer.

How Are The Mind And Brain Related?

Cleaning out the Chinese Room