I have a point to make about zombie movies and the way that filmmakers use them to teach us moral lessons. But before I make this point, I have a confession to make. Call me crazy, but I just don’t find zombies all that dangerous.

Don’t get me wrong. Zombies are quite horrifying. The idea of a corpse – especially the corpse of a close friend or relative – getting up, walking around, and feasting upon the flesh of the living, is incredibly creepy. It throws into chaos our entire worldview, according to which death is final, the end of the game. And so it’s hard to think of something more unsettling than an encounter with a zombie. If I ever met one – if a dead person was walking towards me with the intention of eating me – I’d probably scream, wet my pants, and break down crying like a little girl. But if I managed to pull myself together during my zombie encounter before it had a chance to snack on me, my survival chances would soar. Once the visceral fear it inspires is overcome, a zombie simply isn’t a very formidable opponent. To be sure, it has a number of advantages. It can shrug off most ordinary wounds. It doesn’t need to sleep, or rest, or even breathe. And most insidiously, its bite is infectious. Get bitten, and within hours you too will be among the walking dead.

However, a zombie’s weaknesses far outweigh its strengths. It is slow-moving, and none too bright. It uses no tools more complicated than a club or a rock. It has no more strength than an average living person. It can be killed by any severe head wound, using a gun, club, or axe. It is also afraid of fire, and with good reason – zombies are highly flammable. And so my odds of overcoming a lone zombie are extremely good. I could outrun it. Given any weapon, I could almost certainly outfight it. Given a torch, I could set it on fire, or just drive it away. And if I had a gun, the zombie would be, well, dead meat (again). A single well-armed person could easily take on a number of zombies, and a SWAT team or military unit could handle an army of zombies. Zombies don’t employ military tactics more advanced than “Let’s lumber towards the humans with our arms outstretched.” West Point graduates they ain’t. (For a more detailed discussion of the limitations of zombies, see David Dietle, ‘Seven Scientific Reasons a Zombie Outbreak Would Fail (Quickly)’, www.cracked.com, Aug 17, 2010.) 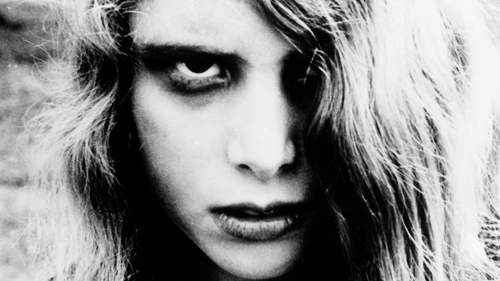 Zombie from Night of the Living Dead

Most zombie movies today depict the living dead as described above. But this wasn’t always the case. Zombies made relatively few appearances in movies before the late 1960s, and when they did it was usually in the context of voodoo magic. Here zombies were people bewitched by Haitian witch doctors, and could be found picking sugarcane while staring ahead with dead eyes. In these movies zombies created part of the background atmosphere, alongside creepy old houses, cobwebs, bats, and Boris Karloff, but they usually were not the primary antagonists. Then came 1968, and George Romero’s Night of the Living Dead. This film rewrote the zombie role completely, turning them from unfortunate living people captured by voodoo spells into cannibalistic corpses resurrected by radiation or the like. The film has spawned five sequels to date, and countless imitations. The overwhelming majority of the new zombie movies depict the living dead more-or-less as Romero did: slow-moving, afraid of fire, invulnerable to injuries except to the brain: these zombie characteristics have become known as the ‘Romero Rules’. But this raises a tough question. If Romero Rules zombies aren’t very dangerous – creepy, yes, dangerous, no – then how could one possibly construct a horror movie around them, let alone dozens of movies? How can a bunch of messed-up dead people pose a genuine threat to anyone?

To date, zombie movie makers have identified only three ways for zombies to be dangerous. The first option is to place a group of people in a situation which limits their resources and organization severely. Night of the Living Dead played this card as well as it ever will be played. The story centers upon seven people who flee to a farmhouse in rural Pennsylvania as the dead start to rise. They are heavily outnumbered, and cut off from the outside world. They do not know each other, nor do they know anything about zombies. And most importantly, their personalities differ greatly. The dramatic heart of the movie is a clash between the two most outspoken people in the house, Ben and Harry, as they try to figure out how to survive. Understandably, they find it very hard to work together, and so things don’t go well for them…

The second option is to tinker with the Romero Rules, making zombies a more credible threat. 28 Days Later (2002) evens the odds in this manner. The zombies in this movie move fast and attack with wild ferocity. More importantly, infection takes place within seconds of exposure to zombie blood. One could believe zombies of this sort, unlike Romero’s zombies, overrunning human society.

The third option is to make an idiot picture. An idiot picture, according to film critic Roger Ebert, is a film whose plot could only work if every character in the story is an idiot. (Ebert used the term ‘idiot plot’, but the term ‘idiot picture’ is now routinely used.) Sadly, most post-Romero zombie movies fall into this category. A good example is the mind-numbingly stupid Resident Evil (2002). In this movie, a ‘highly-trained’ team of mercenaries face off against a horde of zombies. By the time they realize they’re fighting zombies, they have nearly exhausted their ammunition without seriously reducing the zombie horde, because they’ve been shooting the zombies in the chest over and over again, even though shots to the chest are obviously failing to injure them. These geniuses wasted hundreds and hundreds of bullets in a clearly ineffective manner, without once trying a head shot.

Sadly, George Romero’s own zombie movies drifted into idiot picture territory. Take Day of the Dead (1985), Romero’s third installment. The film is set at a military base in Florida, where a handful of soldiers and scientists are desperately trying to hold out against the zombies, which have overrun the United States. During the movie’s climax, a zombie horde breaches the base. The soldiers react like complete idiots, running around like headless chickens, and get slaughtered as a result – despite the fact that they are all heavily armed and have plenty of ammunition, and cannot be facing more than a hundred zombies. Each of the soldiers still manages to kill a few zombies, highlighting the fact that the soldiers could easily have survived had they demonstrated even minimal intelligence. And if this holds true for a handful of survivors hopelessly outnumbered by zombies, it holds true all-the-more for the fully-functioning military units that surely outnumbered the zombies when the dead first began to rise. In other words, the zombie apocalypse could only succeed in a world of complete imbeciles.

The Moral Message of Zombie Movies

That, strangely enough, turns out to be George Romero’s point. Romero is famous not just for zombies, but for dealing with important social or moral issues. For example, the second of his zombie movies, Dawn of the Dead (1978), depicts zombies mindlessly walking around… a shopping mall! No explanation of the symbolism is required, I trust.

One of the major themes running throughout his living dead movies is peoples’ inability to work together to solve serious problems. Romero has, for example, described Day of the Dead (apparently his favorite) as a “tragedy about how a lack of human communication causes chaos and collapse even in this small little pie slice of society” (from ‘Romero’s Zombies’, www.zombies.parallelports.org, May 29, 2008).

Romero might seem to have a point. No sane person could fail to be depressed by the capacity of the human race to ignore problems like climate change – problems serious enough to threaten human civilization. Nevertheless, I somehow think that if global warming shuffled up to your front door and tried to eat you, you would probably stop ignoring it real fast.

As a species, we may be irrational in ignoring climate change, but we’re irrational in understandable ways. Climate change does not happen all at once; the danger it poses creeps up on us at an imperceptibly slow rate. It takes some scientific understanding to grasp the models used to predict its effects, and there are vested interests that stand to make money by encouraging inertia and lack of action; and inertia is easy to encourage among people who already have a lot of things on their minds.

None of these points would apply, however, if corpses started getting up and murdering people. The problem would be immediately apparent, its effects dramatic and obvious. Nobody stands to gain anything from ignoring it. And the actions necessary to handle the problem are pretty simple. “Shoot the zombie in the head before it kills you” is a much easier message to grasp than “Don’t drive a 4X4 or it will make an immeasurably small contribution leading to more bad weather within a few years.” Failure to join the fight against climate change is human, all too human. Failure to join the fight against the zombie apocalypse would be just stupid.

That is the point I would like to make about zombie movies, or indeed any horror movie with a message about the human condition. These movies impart a message by telling a story that, although possessing supernatural elements, is recognizably like real situations. By setting the story in an unreal context, the storyteller creates a critical distance between the audience and those situations. If all goes well, the story will cause people to see something about the way the characters behave (e.g., that short-sightedness can lead to tragic results), and then notice that real people behave in the same way. In effect, horror films with a message hold up a funhouse mirror: the picture may be distorted, but if people look closely, they will recognize themselves in it.

Yet while a mirror can distort a picture, it cannot outright falsify it. If a story is to impart a lesson, the circumstances facing its characters must resemble those faced by real people. If they do not, the storyteller has only two options. She can have the characters behave in a way that makes sense in context, but that does not resemble the real behavior about which she wishes to make a point. Or she can have the characters behave in a way that makes her point, but that makes no sense in the story (for example, by the people behaving like idiots). Either way, the story’s ability to impart a moral message will be hampered. This, all too often, is what happens in zombie movies. Human beings face real existential threats, such as climate change. But zombies pose no such threat, except in very special circumstances. And so either the zombie menace is ultimately overcome – in which case, the big message is lost (climate change is a much tougher nut to crack) – or else it is not overcome due to the unrealistically stupid behavior of the characters. Neither option sheds much light on the human condition.

Peter Stone teaches Political Science at Trinity College Dublin. He is the author of The Luck of the Draw: The Role of Lotteries in Decision Making (Oxford University Press, 2011). Sadly, the book contains no zombies.

Car Seats and the Absurd

Are There Duties To The Dead?

Which Beings Should Be Given Rights?