Emotions and the Brain

Recent neurological research at Carnegie Mellon University in Pittsburgh, Pennsylvania, suggests that each emotion humans experience has a distinctive ‘signature’ on fMRI (functional Magnetic Resonance Imaging) scans. The scans tend to look the same whenever a particular individual has a particular feeling, and look broadly similar even in the brains of different people experiencing a similar emotion. This effect can be obscured by distractions and researchers found that the clearest results could be obtained by scanning the brains of trained ‘method actors’ from the university’s drama school. As ten actors each made themselves experience nine different feelings, researchers were able to identify distinctive patterns of mental activity linked to each emotional state. Following this, the scientists found a computerised method of predicting how the actors were feeling from a fresh set of brain scans. The computer was 84% accurate at guessing their emotions based on their own previous results and 70% accurate when basing its judgment on patterns of activity seen in brain scans of other participants. Some reflections on earlier uses of fMRI to investigate human mental activity can be found in Francis Fallon’s article.

The American Philosophical Association (APA) is planning to launch its very own scholarly journal in partnership with Cambridge University Press in 2015. The imaginatively-named Journal of the American Philosophical Association (JAPA) will appear quarterly and will include “various discussion topics in the diverse subfields of philosophy as well as contribute to the discipline’s continued growth and global impact.” The APA, based at the University of Delaware, is one of the world’s largest philosophical societies with a membership of over 10,000 professional philosophers and 90 affiliated groups, so their new journal might become quite influential. 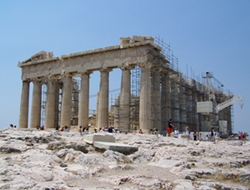 The 23rd World Congress of Philosophy will be held in Athens from 4-10 August 2013. The theme will be ‘Philosophy as inquiry and way of life’. The organisers are the International Federation of Philosophical Societies (FISP) and the Greek Philosophical Society, under the auspices of Unesco and the President of Greece. The World Congress is held in a different city every five years and is always a massive organisational undertaking. Over 2,000 philosophers from 105 countries will be gathering in Athens, and the provisional timetable lists well over 500 events. The conference committee have also announced special sessions to be held at four locations of particular interest in the history of philosophy: the sites of Plato’s Academy and Aristotle’s Lyceum, the Pnyx (the hill on which the democratic assembly of ancient Athens was always held) and the location in which Plato’s Phaedrus dialogue is set.

A team from Philosophy Now magazine will be attending the World Congress and organising a round table discussion there on ‘Philosophy in the Public Sphere’.

It seems that the summer has caused artists to seek inspiration from philosophy, and vice versa. In the medieval town of St Paul de Vence, in South West France, the Maeght Foundation is staging a major exhibition which gives a free reign to philosopher, writer and media superstar Bernard-Henri Lévy (pronounced ‘BHL’ in French). His aim is to increase understanding of the “age-old battle between philosophy and painting” using a hundred ancient and contemporary artifacts. In a series of short black and white videos, filmed by Lévy, contemporary artists read directly to camera from their choice of works by philosophers including Plato, Hegel and Schelling.

Later in the summer, in Northern Ireland, the world premiere of ‘The Conquest of Happiness’ will be staged at The Venue 2013 in Derry/Londonderry on 21-22 September. The production is inspired by Bertrand Russell’s book of the same name, and by a question he asked: how can people deserve happiness? It will be a multi-artform event featuring actors, musicians and dancers from Northern Ireland, the Republic of Ireland, Bosnia–Herzegovina and Slovenia, directed by Haris Pašovic of the East West Theatre Company in Sarajevo.

The 2nd Philosophy Now Festival will be held in London’s Conway Hall all day on 8th September. It will include talks, debates, workshops, events for children, a round table on ‘Surveillance and Privacy’ (which we will be secretly filming), another round table on ‘Zombies and Philosophy’ and much more. There will be a best-dressed zombie contest. Stephen Law will give the PFA George Ross Memorial Lecture and this magazine’s own columnist Professor Raymond Tallis will give a lecture about whether science has killed philosophy. (Plot spoiler alert: he thinks it hasn’t.) All are welcome. For more details please visit: philosophynow.org/festival.