Rick Lewis and Anja Steinbauer report from Athens from one of the biggest philosophy gatherings of all times.

The press in the English-speaking countries rarely cover anything to do with philosophy or intellectual culture unless there is some kind of scandal involved. A few weeks ago it was reported in The New York Times and many other newspapers that the British philosopher Colin McGinn had had to resign his academic position at the University of Miami due to an accusation of sexual harassment. Just a day or two later, around five thousand professional idea-jugglers gathered in Athens for the World Congress of Philosophy. From France and Germany, from the steppes of Russia and the plains of China, Kazakhstan and Bosnia, Peru and Australia, they brought whatever wisdom they possessed to a city in the midst of a profound economic, social and political crisis, to one of the planet’s biggest-ever gatherings of philosophers. They came to take part in well over five hundred individual symposia, lectures and debates on an astonishing variety of philosophical problems. Sadly you won’t have heard a peep about any of this in the British or American media. One person suggested that the World Congress would only have been deemed newsworthy if the entire organizing committee had been wiped out by a collapsing ceiling.

Although Athens’ problems include savage spending cuts and around 25 percent unemployment, a ceiling collapse was never all that likely. The World Congress was held mainly in the vast concrete caverns of the University of Athens’ Philosophy School, which is (or so we were told) the country’s second-largest building after the Defence Ministry. However, two of the smaller venues used for special sessions really were in ruins, being the excavated remains of Plato’s Academy and of Aristotle’s Lyceum. At least there were no ceilings left to fall. The emotional effect of sitting down to talk philosophy in the very places where Plato and Aristotle once taught brought a lump to the throat of even the most unemotional rationalists and the most cynical skeptics. 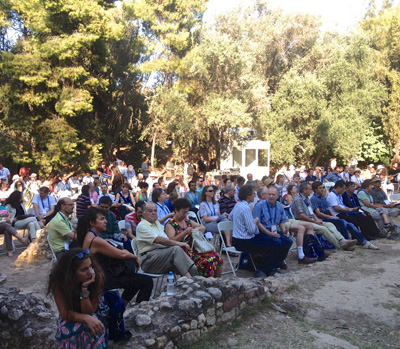 The city baked in the August sun but despite grinding economic hardship and a new emergency flat tax that (we were assured by a local primary school teacher) would be utterly impossible for many families to pay, the underlying tensions were visible only once during the World Congress. This was during the sumptuous opening ceremony in the classical Odeum of Herodes Atticus on the south slope of the Acropolis, its stone seats packed to capacity under the starry sky above (as Kant might have put it). Greece’s Prime Minister Antonis Samaras was due to give a speech of welcome, but scenting trouble had cleverly sent his Minister of Culture along instead. He spoke in Greek and an English translation of his unobjectionable platitudes was projected onto the ancient stones behind him. However, when he unwisely ventured that “Greeks can live on little,” many Greeks in the audience responded with catcalls and booing, which was answered by a scattering of applause from others who (one explained to me later) felt that philosophy and politics should be kept strictly separate.

Athens being the closest thing that philosophy has to a sacred city, special sessions were held at locations of particular historical significance. Plato’s famous Academy is now a garden pockmarked by past archaeological digs, and crisscrossed by the crumbling foundations of the world’s first institution of higher education, and still dotted with olive trees as it always was. As we filed in to sit on rows of folding chairs, each of us was handed a leaflet by local residents protesting about plans to build a shopping mall there and appealing for international protection for the place that was once the fountainhead of Western thought. Other sessions were held on the Pnyx, (the hill that was the meeting place of the democratic assembly of ancient Athens from 500BC onwards); on the spot where Plato’s Phaedro dialogue was set; and in the recently unearthed remains of the Lyceum, the philosophy school which Aristotle founded next door to a gymnasium after he left the Academy to set up shop on his own.

During the session at the Lyceum, Greek philosopher Kostas Kalimtzis spoke about Aristotle’s wide-ranging concept of leisure (Schole) and his observation that societies only rarely collapse in wartime but much more frequently fall apart in times of peace and prosperity, through their inability to create and constructively use Schole. Kalimtzis argued that our astonishing technological progress since World War Two hasn’t produced leisure but only increasingly stressed office workers, making us into a cageful of hypercharged hamsters running ever faster on our treadmills. He made an inspiring plea for more, and better used, leisure time.

Germany’s most famous living philosopher, the venerable critical theorist Jürgen Habermas, had his own take on the underlying causes of society’s crisis. He had been invited to give a plenary lecture on the notion of ‘Cosmopolitanism’, but he made clear that he wanted to talk mainly about the economic and constitutional problems in the European Union instead. First he spoke about the place of the individual in a globalized world of interconnected nation states, and of the distant hope of a world with a fixed constitutional order, but without a world government. He argued that a conflict between solidarity and justice holds the key to the European Union’s ongoing crisis. Justice has to do with institutions, and solidarity (which is a moral rather than a political value) has to do with the relationships between individuals, independent of formal institutional arrangements. Habermas argued that only greater solidarity between individuals could enable Europe’s crisis to be resolved, and that it was therefore crucial to make the EU as democratic as possible, so as to bring that solidarity to the fore.

By bringing together so many thinkers from so many countries, the World Congress brought to light interesting fields of study in philosophy about which we rarely hear in mainstream philosophical discourse. These included an ongoing and lively study of Aristotle’s Square of Oppositions, diverse developments in Buddhist philosophy as well as the Neo Hellenistic movement. Many younger Greek philosophers were clearly passionately involved in the latter, as became clear in a very popular session honouring the work of Professor Evangelos A. Moutsopoulos, who has dedicated a lifetime of research and philosophical reflection to demonstrating the relevance of Greek philosophy in our time.

Umberto Eco was supposed to give the prestigious Maimonides Lecture but was taken ill and stayed home. Even up to the last minute, the organisers were still hoping that he might be able to deliver his lecture via Skype instead, but it was not to be. His talk was read out, but for some of his vast audience the attraction had been the presence of the man himself. They drifted out of the auditorium and into a much smaller lecture theatre upstairs, where our team from Philosophy Now was hosting a round table discussion on how to get more good-quality philosophy into the public sphere. Having been scheduled directly against one of the world’s most famous authors and semioticians, we had glumly predicted an audience of around zero, a hollow echo of Eco’s crowd downstairs, so we watched the newcomers stream in with a kind of guilty relief. Eco’s indisposition was our gain. Our audience was addressed by the brave and tenacious human rights activist Professor Ioanna Kuçuradi from Turkey, as well as by journalist Carlin Romano and popularisers David White from Rochester, NY, and Anja Steinbauer from Philosophy For All, who charms academic philosophers into giving lectures to the public in London pubs.

The venue of the next World Congress of Philosophy was decided at a session on the closing day, in a charged, partisan atmosphere reminiscent of the vote for the hosting of the next Olympics. The contending cities this time were Beijing and Rio de Janeiro. The debate was brisk, with many concerns being voiced including whether everyone wishing to attend would even be allowed into China. (The entire contingent of academics from Nigeria, and most of those from Vietnam, had been refused visas to enter Greece, for reasons that remain cloudy). However, the Chinese philosophers won the vote due to a well-prepared campaign, a track record of successfully handling large conferences and perhaps a tentative hope that the World Congress might encourage the development of critical discourse within Chinese society. Experience shows that such hopes are often dashed; the Athens World Congress was a great organizational achievement but was also an example of professional philosophers talking to one another on a secluded university campus, with almost no engagement with the wider public. There were no philosophy sessions held in the ancient agora or on the street corners, no attempts to draw ordinary Athenians into dialogue. What would Socrates have said? Therefore the hope of encouraging genuine dialogue this way may be a triumph of hope over experience, but as experience also shows, you’ve got to be in it to win it.