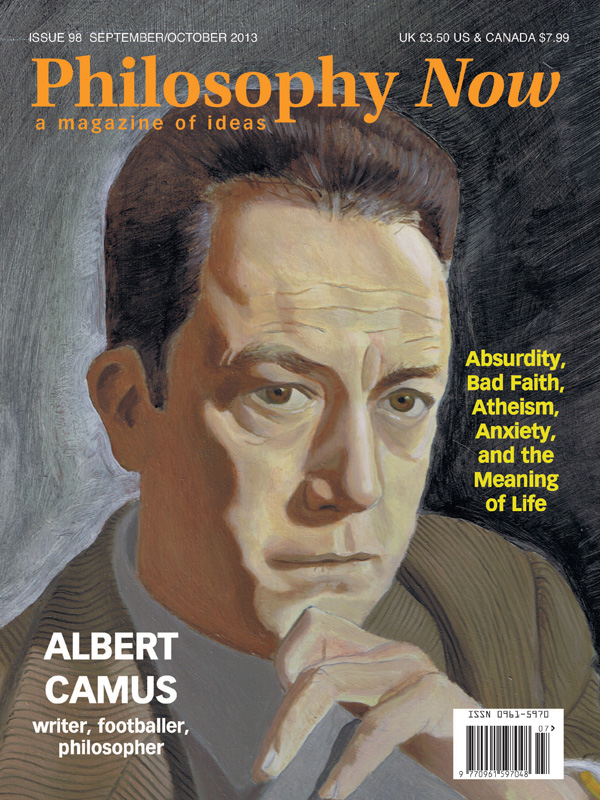 Rick Lewis and Anja Steinbauer report from Athens from one of the biggest philosophy gatherings of all times.

The Master of the Absurd Turns 100

Ray Cavanaugh gives us a brief introduction to the life of Albert Camus.

Ray Boisvert tells us about Camus’ essential ambivalence towards the world.

Van Harvey says it is possible to live meaningfully without a higher purpose.

Alistair MacFarlane considers the differences between these crucial concepts, and the implications for how we think about computers.

Brian Dougall puts the philosophy of Epicurus (341-270 BC) to the test.

Maria daVenza Tillmanns on understanding self and others through dialogue.

Dale DeBakcsy delves into the secret origins of modern philosophy.

What Is The Present Nature, And The Future, Of Philosophy?

The following answers to this question of philosophy each win a random book.

Illusion of an Illusion • No-Buddhism • Artificial Unintelligence • Machiavellian Intrigues • A Variety of Universal Moral Laws • Can’t Keep a Good Zombie Down • Natural Philosophy • Why Did The Philosopher Cross The Road? • Condensed Thoughts

Tim Madigan looks at the meaning of life for Albert Camus.

Raymond Tallis maps the gaps between language and reality.

Constantine Sandis’s critiques of our actions are under scrutiny by Les Reid.

What Money Can’t Buy: The Moral Limits of Markets by Michael Sandel

Michael Sandel’s critiques of our actions are under scrutiny by Philip Badger.

Roger Scruton’s critiques of our actions are under scrutiny by Paul Keeling.

Socrates and His Clouds

Sean Gittins informs us of the incontrovertible but hitherto unresearched link between philosophy and hair style.