2018 World Congress of Philosophy to be held in Beijing

In a paper just published in the journal Science, (26 July 2013) a team of researchers at MIT led by Nobel laureate Susumu Tonegawa say they have succeeded in implanting a false memory in the brain of a mouse. This was done by chemical manipulation of individual neurons; success was judged by the fact that the mouse showed fear behaviour when placed into a chamber that contained nothing frightening. The researchers hope their work will eventually cast light on the mechanisms of false memory syndrome in humans.

According to a report in the journal Nature, Austrian scientists have learned how to use stem cells to grow miniature human brains in the laboratory to aid neurological research. The brains are only about 4 mm across and their structure is designed to render them utterly incapable of anything resembling thought. (Several have already been elected to public office.) It is intended to use the technique for modelling normal brain development and studying a number of brain disorders such as microcephaly.

Maybe We Are All Martians!

RNA molecules may originally have formed on Mars and been transported to ancient Earth by meteorites. According to the RNA world hypothesis, self-replicating RNA molecules were the first step in the development of life on Earth, leading later to DNA and eventually to us. However, a study by Prof. Steven Benner, presented at the geochemists’ annual Goldschmidt Conference in August, argues that the seas of early Earth lacked the particular mineral salts needed as catalysts in the formation of the very first RNA, but that these salts were present on ancient Mars, making that a more likely origin for RNA. Earth is often hit by rocks of Martian origin, blasted into space aeons ago by meteor impacts on Mars (Martian surface gravity being only 37% of that on Earth), and this is proposed as the mechanism by which Martian RNA could have ended up in the ‘primordial soup’ of the oceans of ancient Earth. If the theory is correct, then the search for Martians is over – they are all around us!

A swirl of lurid headlines enveloped Colin McGinn, an influential British philosopher who recently resigned his job at the University of Miami. The New York Times and other newspapers reported that he did so rather than face a formal ‘unprofessional conduct’ inquiry for allegedly sexually harassing a female graduate student he was supervising by sending her lascivious and unwanted emails. McGinn responded on his blog by claiming that they had a consensual, romantic, but non-sexual relationship and that the emails were understood on both sides to be harmless banter. The case awakened debate over professor-student relationships and about whether women in philosophy face a widespread sexual harassment problem.

McGinn is perhaps best known for his work in the philosophy of mind, and in particular for advocating a theory (known as New Mysterianism) that we will never fully understand the nature of consciousness because the necessary concepts fall outside what our brains are equipped by evolution to handle.

Christian ethicist and public intellectual Jean Bethke Elshtein died on August 11 at the age of 72. Elshtein was based at the University of Chicago. She defended the US-led invasion of Iraq on the basis of Just War theory in her book Just War Against Terror in 2003. 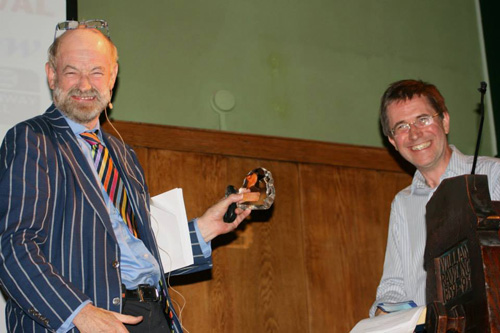 The 2013 Philosophy Now Award for Contributions in the Fight Against Stupidity has been awarded to our columnist Professor Raymond Tallis (left). Tallis is a medical doctor, author, poet and philosopher. The award was presented to Tallis at the Philosophy Now Festival at London’s Conway Hall on 8th September. Accepting the award, Tallis promised to continue the fight against stupidity inside his own skull.