Tim Madigan looks at the meaning of life for Albert Camus.

“Sisyphus, it will be recalled, was condemned by the gods to roll a stone to the top of a hill, whereupon it would roll back to the bottom, to be moved to the top once more by Sisyphus, then to roll it back again, and so on, over and over, throughout eternity. Here, surely, is existence reduced to utter meaninglessness.” – Richard Taylor

It would be hard to find two more contrasting passages than those above, taken respectively (and respectfully) from Richard Taylor’s book Metaphysics (1963) and Albert Camus’ The Myth of Sisyphus and Other Essays (1942). For Taylor, the Ancient Greek myth exemplifies futility; for Camus, joyfulness. How could two such gifted philosophers see the same story from such differing perspectives? 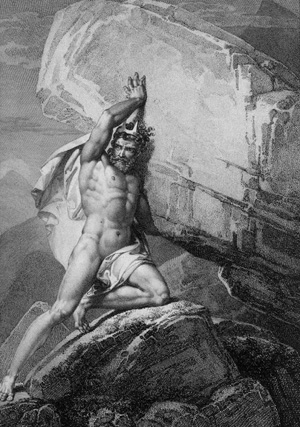 I suspect that most readers would be more partial to Taylor’s interpretation. Rolling a rock unceasingly, with no hope of ever getting it over that hill, wearily trudging back down again and again to start the effort anew once the rock falls back down – who could possibly draw any sustenance from such a life? And to imagine Sisyphus happy in such an endeavor? Surely that its a very strange way of looking at it – even, dare one say it, absurd?

Both Camus and Taylor are using the legend of Sisyphus to address what, as both Monty Python and Douglas Adams would attest, may be the most fundamental philosophical question of all: What is the meaning of life? Camus very famously begins Sisyphus with a related point, boldly stating, “There is but one truly serious philosophical problem, and that is suicide.” If Sisyphus’s situation really does exemplify the human condition, then why should one go on at all? What’s the point of pushing a rock, or punching a clock for that matter, if ultimately it doesn’t amount to a hill of beans, or a hill of stones?

The great philosopher Peggy Lee once asked – “Is that all there is?” Taylor, in a chapter entitled ‘Metaphysics and Meaning’, essentially says that if life is simply drudgery, then perhaps suicide would be the best solution. He postulates some variations of the Sisyphus story to see if they might give us some hope: a Sisyphus, for instance, who doesn’t push merely a single stone, but instead many different stones to the top of the hill, and constructs a beautiful temple from them (although Taylor never states a temple to whom or to what). But would even that make his life worth living? While his labor may not have been all for naught, ultimately the temple too will crumble, and like Ozymandias, his mighty work will cease to be.

Here Taylor gives his view on the meaning of life: surely what makes the difference is that it is Sisyphus’s temple, his creation. The ability to be creative is what gives meaning to life. As Taylor puts it, “Rational beings do not merely foresee what will be; they sometimes determine what will be… Sisyphus displayed his ultimate rationality… as we have modified the myth, in the display of strength and genius that took the form of a beautiful and lasting temple, born first in his own imagination” (Metaphysics, 4th edition, p.138). For this creation, he has the right to smile.

The Smile of Absurdity

Perhaps the meaning of life does lie in our ability to create. But, as Taylor adds, creative genius is rare. Do most lives therefore lack meaning? Like Nietzsche and his own philosophical hero Schopenhauer, Taylor seems to say “Yes.” If you can roll a stone but not build a temple, then when it comes to meaning in your life, you may just be out of luck. Sorry, Charlie.

Camus is not so callous, nor so hopeful. He sticks with the original version, and gives a rejoinder. His Sisyphus is not building a temple, or even a hut; he’s merely rolling his rock; and yet he does it with a smile on his face. Why?

In order to get a better idea of what Camus is driving at, let’s jump back a step and ask the more basic question – why was Sisyphus condemned to such a punishment in the first place?

There are many different versions of the myth, a few of which Camus relates in his essay, but basically, Sisyphus was originally the King of Corinth, and considered to be one of the cleverest and wisest of men. In some versions he was also considered to be a thief and a scoundrel (not necessarily a contradiction, in Camus’ opinion). Most of all, Sisyphus loves life, and wants to do everything he can to prevent its end. Through trickery, he manages to handcuff the god of the dead, Hades himself, and thereby prevent himself from being dragged down into the Underworld. While in captivity Hades cannot unleash his powers, so death takes an unexpected holiday. All things remain alive. And as long as he has death in his power, Sisyphus cannot die. Ultimately, however, Sisyphus loses out when Ares, the god of war, becomes upset that battles are being fought without any victims. Although he cannot kill Sisyphus, Ares threatens to strangle him for all eternity unless he releases Hades. Begrudging, the Corinthian King relents. Not surprisingly, Hades is none too pleased over his humiliating captivity, and sentences Sisyphus to his eternal rock’n’roll punishment. All things considered, though, pushing a rock eternally is probably better than being choked forever, in the grand scheme of things.

Let us return to Camus. Sisyphus’s rock, in one sense, represents the countless futile tasks that mark our lives. But in another sense, the rock represents life itself. Our lives are the rocks we push. To cease to push them is to cease to live. It is, Camus points out, our ability to think that gives meaning to this story. Every second of every day in which we live, we can say with certainty “I’m not dead yet.” Death may have the last laugh, yet while we’re alive, although we may feel his sting, we do not feel his scythe, and we can choose to smile back at him, in contempt. Existence itself has no meaning; but we can choose to give meaning to our own existence. That is the power of humanity, and perhaps the key message of Existentialism. Accept the futility and the absurdity of existence, and push on.

As long as we are alive, we are holding death at bay. The meaning of life therefore is, in part, knowing that one is alive, accompanied with an awareness that all such life, including one’s own, is fleeting. The smile on Sisyphus’s face is due to his recollection that he once held Death in chains, and, while he’s pushing that rock, Death has still not conquered him. The King of Corinth on his lonely mountain is the absurd hero par excellence. Sisyphus rocks on!

The Meaning of Life (III)

Miranda and the Meaning of Life