Akif Rashid asks Albert Camus why so many people around him are unhappy and confused, and what to do about it.

I tend not to live by very many adages, but I am inclined to a witticism once in a while. One of the lines close to my heart is by Henry James: “I’ve always been interested in people, but I’ve never liked them.” And to be foolishly honest, few people are as interesting and unlikeable as my fellow citizens of Pakistan. Because of this, I’ve developed quite the habit of people watching (it’s okay as long as you don’t use binoculars; that is frowned upon). In fact, just the other day, I was roaming around a shopping mall in my monopoly man top hat, pretending to be richer than I am, when I saw one common feature amongst the madding masses: No one really seemed to be happy. Whether they were coming out of a cinema, buying a nice winter jacket, or going into a food coma in McDonald’s, most people seemed to carry a shy scowl. How could time with friends and family lead to such discontent? Were their pants too tight? Was the McFlurry machine broken? Well, if I had to hazard a guess, I would think it’s a common condition of most Pakistani folks that we, as a people, have a shattered sense of identity. 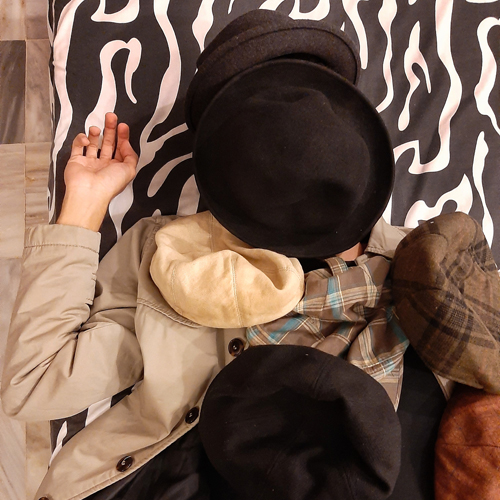 Code switching is a common enough feature of multilingual people, and particularly so when there’s so many refractions of the self to be projected out to the world. Take an ordinary university student in Pakistan. He’ll project one aspect of self when out with the lads; another for more polite company; a more reserved, religious one with his family; and he’ll considerately hold back signs of affection in public. The way he speaks with someone who prefers Urdu would be different from with someone who enjoys conversation in English. These ‘sociolects’ split and splinter with each iteration of identity, and scarcely seem to coexist within one consciousness. In the end, we see a man whose head is bent under the weight of his innumerable hats.

This broken consciousness leans toward absurdity; and to those who think like the French-Algerian philosopher Albert Camus (1913-1960) this might seem to be a great reason to end it all. Although Camus had a flair for the dramatic – he once asked “Shall I kill myself or have a cup of coffee?” – he did have some rational bases for his nihilistic solutions. How would this artist-philosopher view the lives of postcolonial, colour-conflicted, self-unsure Pakistanis?

Perhaps one could compare our life to the story of Sisyphus, who was condemned by Zeus to push a rock up a hill repeatedly every day for eternity; it is a life of routine broken down into well-worn steps and repetition. For example, at any given family gathering, I have a mental checklist of those people I need to greet, in what order, and with what degree of warmth. The gestures have become robotic. But I must wear the hat of a dutiful son or cousin on those birthdays and weddings, mustn’t I?

This same drudgery can be found in businesses, government offices, and prisons. Sisyphus’s rock is mass manufactured. This should be unsurprising. After all, in Camus’ The Plague (1947), the disease, an existentialist metaphor for life, is allegorically likened to a public official who was “a shrewd, unflagging adversary; a skilled organizer, doing his work thoroughly and well… But it seemed the plague had settled in for good at its most virulent, and it took its daily toll of deaths with the punctual zeal of a good civil servant.”

Carrying on with the similarities between Sisyphus and my social life, once I have pushed the rock of formality up the mount, it tumbles back down to the start, and I begin anew with the next function. Yet how sweet is the halwa or pink tea when your tongue is numb to its taste? Our fate and our frustration share one core feature: both are inescapable. However, the true nature of the tragedy is not in the paradox that success’s reward is only ‘more of the same’, but the fact that man chooses to repeat himself. One can see this aspect of our nature nicely summed up in a 2015 song by the American rapper Kendrick Lamar. ‘Institutionalized’ deals with the fact that while his success has afforded him the ability to be a prisoner of birth no longer and escape the gang culture of his hometown, the pressures of society keep driving him back: “Institutionalized, I keep runnin’ back for a visit,” he raps in the song’s chorus.

General culture has shaped people’s selection of hats in Pakistan in what some may call a more insidious manner: the trilby for the working week, a prayer cap on Fridays, the snap-back on Saturdays, and with sweet relief, we let the sun tan our bald spots on Sunday. These roles are inescapable, someone might say. In his book Games People Play (1964), Eric Bernie argued that we define social activities, and even the disliked roles help us to feel fulfilled: the alcoholic man does not feel like he’s had enough until his wife scolds him; we can smile at co-workers whom we find arrogant and unlikeable; we can say thank you and tip that incredibly slow waiter who brought the wrong soup. Within the futility, within the facsimile and façade, we forge function and that somewhat stable form of the familiar. To nihilists such as Friedrich Nietzsche, it would simply be a matter of choosing the devil you prefer: “In loneliness, the lonely one eats himself; in a crowd, many eat him. Now choose” (Assorted Opinions and Maxims, 1879).

Perhaps one can look to Camus’ Le Premier Homme (The First Man, 1960), and the dislocation the protagonist Jacques experiences while being alone. Within this novel Camus seems to argue for a sort of ahistorical innocence (certainly the history that does appear is rather dubious and destructive). But in an interconnected world, including an internet filled to the brim with niches and tropes, Camus’ Outsider/Stranger from his novel of that name might be eponymously demonstrating the most honest way to coexist with the absurd. After all, it would be a shame to let mass communication create one mass personality. According to Camus, there is no absolute Truth, but there are truths. This makes truth more individualistic, since each person may define their own truth, and so their own being.

Pakistan is a land that has defined itself by its negatives. We are a people who are not Indian, not Hindu, not British, not sinners – who are not sure of anything about ourselves, really. But before the ‘we are’ can properly form itself, there needs to be at least a few ‘I am’ statements in the mix. Compare this with oppressed African Americans who said ‘I’m black and I’m beautiful’, or the LGBTQ+ community, who declared ‘I am here and I am queer’, and thereby established their communities. As Camus might put it, ‘I rebel, therefore we are’. A land that was conceived in comparatives and relatives needs a sprinkle of truth. For Camus, that vital truth would not be through history or religion. He might shun those as placebos, placeholders, or plain old excuses. The rebellion here is not against a fascist regime or totalitarian propaganda, but against the paranoia that results in conformity.

The desire for belonging is a natural impulse. As is laziness. But any person of reasonable intelligence and self-awareness could not be content with simply fitting in. Success in those terms is to be unnoticed. Yet if the individual recognizes himself, becomes his own lynchpin in (or against) the absurd, then the next step is to express himself. Success in those terms is to be unconcerned about the consequences. But if the average Ahmed strays from the worn-out path, he might find a balm for his itch for freedom. The wind in his hair could cool a burning doubt.

To sum up this long-winded proposition, I offer the only line you really needed to get the point: “But what is happiness except a simple harmony between man and the life he leads?” (Camus, Lyrical and Critical Essays, 1967). For a fair point well made, hats off to you, Albert Camus, sir.

Akif Rashid is the author of Encounters, a collection of short stories, and is an eternal student of the arts.