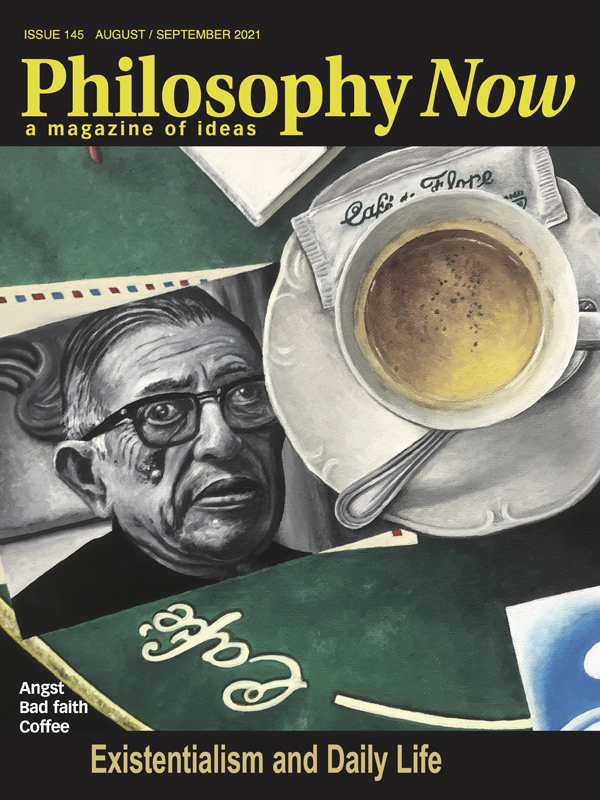 Existing in the World

Gary Cox considers the problematic side of freedom, from the edge of a cliff.

Existentialism from an African-American Perspective

Roger Karny takes another look at liberty and alienation.

Akif Rashid asks Albert Camus why so many people around him are unhappy and confused, and what to do about it.

Zapffe For A New Political Age

Cameron Hendy thinks it’s about time we all stopped.

With the help of renowned logician Taylor Swift, Theresa Helke introduces four fundamental paradoxes: the Liar, Epimenides’, the Truth-Teller, and the No-No.

Alex Richardson explores the ethical cavern at the centre of Stoicism.

Would Kant Have Worn a Face Mask?

Todd Mei says yes, as a duty of practical reason.

Jonathan Head looks at the life and thoughts of an early animal equaliser.

What Is The Most Fundamental Value?

Our readers give their thoughts on values, each winning a valuable, if random, book.

Professor of Philosophy and Head of the Philosophy Department at the University of Liverpool, talks with Annika Loebig about death and democratising meaning.

The Riddle of the Sphincter

Stuart Jeffries considers the moral implications of a (possible) lack of free will.

Dan Ray asks why drugs cannot be a part of good sport.

Why Women Have Better Sex Under Socialism by Kristen R. Ghodsee

Amber Edwards surveys the position of women under socialism.

Cora Cruz finds that sometimes you have to take both.

The Myth of Sisyphus