Jean-Paul Sartre (1905-1980) is perhaps the most famous exponent of existentialism. His philosophy asserts that human beings are cursed with the impossible burden of having to make decisions without any higher justifications. There is no God or other transcendent force to dictate what they should do with their lives. Human beings are alone, and, born without an essence, are forced to define themselves through their own actions. Since we have the sole power to determine our actions, we can (and should) be judged on what we choose to do with our freedom. This is a crushing weight. We live in anguish and despair because every success and every failure rests squarely on our shoulders. The core of Sartre’s existentialism is that human beings are ‘condemned to be free’. 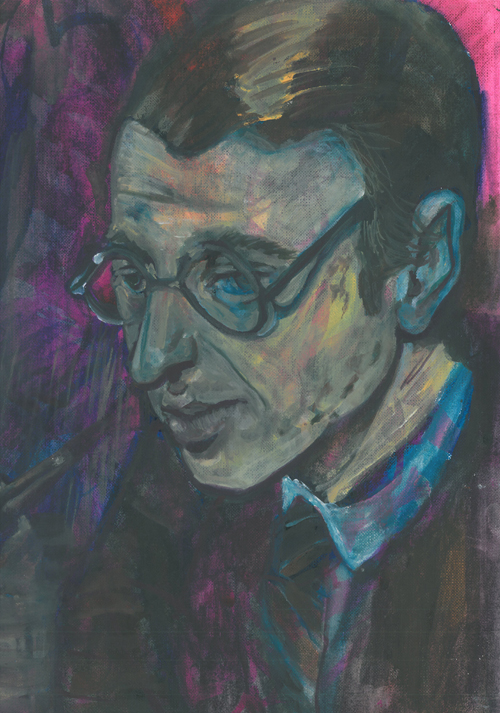 Sartre further explained that people lie to themselves, hoping to escape the curse of free choice. They pretend their choices have been made for them and thus are out of their control: “I can’t do what I chose because I have a family, I have a job, I have responsibilities, I have to earn money…” Sartre called this sort of attitude ‘living in bad faith’.

He also believed a person is “nothing else but the sum of his actions.” So what were the sum of Sartre’s actions? How did he choose to define his existence?

First, as a writer. He wrote a great many books: philosophical treatises, novels, plays, screenplays, journalism, art criticism, psychological studies, and biographies. He was enormously prolific, an unstoppable book-making machine who sought to share his ideas with the world through every conceivable means. Even when his health deteriorated in the 1970s and he became almost totally blind, he continued to generate new material with the help of a reel-to-reel tape recorder.

In 1964, he was awarded the Nobel Prize in Literature. A prestigious honor without a doubt; but he turned it down. Despite having spent his entire career as an author, he decided to renounce literature because just writing is not enough. He could not allow words to act as a substitute for active commitment in the world. As an existentialist, he believed free choice implies the responsibility to act. And he was a social activist who championed a variety of leftist causes. He played a prominent role in the fight against French colonial rule in Algeria, denouncing the French government’s use of internment camps and torture. He became so vociferous that a paramilitary organization targeted him for execution. More than once, militants tried to blow him up by detonating bombs at the entrance to his apartment building.

He was also a passionate advocate of Marxist ideals. He said capitalism was a trap, a machine designed to suck people in and convince them they needed to buy commercial goods, but in reality the accumulation of possessions is unnecessary. They’re an encumbrance, an excuse not to live an authentic life. Sartre embraced Marxism because he thought it allowed people to stop focusing on money and increased their freedom to consider other possibilities. He even met with the Marxist icons Fidel Castro and Che Guevara. While he could not entirely support Castro because of the Cuban government’s persecution of gay people, he was enormously impressed by Che Guevara, who he praised as “not only an intellectual,” but also the “era’s most perfect man.”

And then there were the drugs. Sartre believed a man was defined by his actions; yet his actions included taking massive quantities of uppers, downers, and everything in between. The biography Sartre: A Life (1987) by Annie Cohen-Solal describes that during a typical day, the philosopher would smoke two packs of cigarettes and several pipefuls of tobacco, drink more than a quart of alcohol (wine, beer, vodka, whisky…), gulp down two hundred milligrams of amphetamines, several grams of barbiturates, fifteen grams of aspirin, plus coffee, tea, and who knows what else. He was bursting with ideas that he was desperate to share with the world, so he popped pills and drank coffee to increase his focus and enable him to keep writing at a breakneck pace without the need for rest. Once he finished writing, he was too revved up to sleep, so he would swallow barbiturates to knock himself out. When he finally awoke the next day, he’d pop more amphetamines to cut through the fog of sleep, so he could once again write obsessively all day and into the night. But productivity wasn’t the only reason he took drugs. He deliberately sought to break the shackles of conventional thinking and open his mind. He wanted to embrace the unlimited freedom of being, to experience life in a radically different way. That’s why he injected mescaline, longing to undergo a new adventure that ordinary life could not provide. The good news is he succeeded. The bad news is he got more than he bargained for.

Mescaline is one of the most potent hallucinogens ever found in nature. It was legal at the time and regarded as a safe entry point into the world of psychedelics. Users would consume it orally, either in powder form or in gel capsules, and the effects would last for an average of ten to twelve hours. But Sartre scoffed at the notion of starting with a small dose as a preliminary test. He obtained a massive quantity of mescaline in liquid form and injected it directly into his veins. He shot up with a huge dose of one of the strongest psychedelics to occur in nature, then waited to see what would happen.

His bold experiment quickly transformed into a nightmare. The drug triggered his repressed fear of sea creatures – crabs, lobsters, and octopuses. He began to perceive that there were crabs with sharp claws all around him, surrounding him, crawling over his body; not just for a few hours, and not just for a few days. He injected so much mescaline that the effects of the drug lingered for an unbelievably long time. And long after the drugs wore off, the crabs remained. They followed him everywhere he went, crawling over objects, swarming him. He understood they were figments of his imagination, yet every morning when he woke up, the crustacean hallucinations were waiting for him. Gradually, he became accustomed to their presence. He even came to think of them as friends, and he spoke to them whenever he was alone. As he said in a 1971 interview: “After I took mescaline, I started seeing crabs around me all the time. They followed me in the streets, into class. I got used to them. I would wake up in the morning and say, ‘Good morning, my little ones, how did you sleep?’ I would talk to them all the time. I would say, ‘O.K., guys, we’re going into class now, so we have to be still and quiet,’ and they would be there, around my desk, absolutely still, until the bell rang.” Finally, after spending a full year with the crabs, he feared he was having a nervous breakdown, and decided to see a psychiatrist. “I began to think I was going crazy, so I went to see a shrink… We concluded that it was fear of being alone, fear of losing camaraderie of the group” that caused him to see the crabs. Once the doctor diagnosed the reason for their presence, the crabs suddenly went away, in an instant. They had been with him for so long that he actually felt a sense of loss when they disappeared.

In the end, did Jean-Paul Sartre succeed in defining himself through his books, social activism, and drug use? Well, he was a household name in France when he died, became the most well-known philosopher of the Twentieth Century, and at his funeral 50,000 people followed his coffin through the streets of Paris. So it would appear that the answer is yes.

Sam Kelly is an author focusing on history. His upcoming book is entitled This is Human History on Drugs.

Existentialism is a Humanism by Jean-Paul Sartre