A few years ago I bought the book A Philosophy of Walking by Frédéric Gros (2014). This entertaining volume featured a parade of thinkers for whom walking was profoundly important: Thoreau, Rousseau, Nietzsche, Kant; even Gandhi, Kerouac and Rimbaud made appearances. Walking, Gros suggested, was a condition of their work, an enabler for their thinking. In their walking lay the genesis of many of their philosophical ideas. There was just one thing: the book didn’t include any women. But what really infuriated me was his failure to mention the pre-eminent female existentialist, Simone de Beauvoir (1908-1986).

I could almost forgive Gros’s oversight if Beauvoir had been less of a walker. But the tramping of Simone de Beauvoir puts most of the other walking philosophers to shame. The legendary daily stroll of Kant around his home town of Königsberg is almost quite literally a walk in the park compared to the perilous, almost reckless hikes of Beauvoir. I know because I walked some of them while researching my own book on walking and thinking. 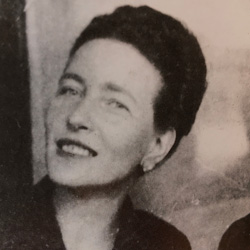 Few people know about Beauvoir-the-hiker. We usually think of her sitting in Parisian cafes alongside Sartre, a chic turban on her head and a cigarette hanging between her fingers. This is not my Beauvoir. I found my Beauvoir – the wildest of hill walkers – in her letters, memoirs, and novels. Here it became blindingly obvious that walking had played a pivotal role in Beauvoir’s own existential journey of becoming. Indeed, careful readers of The Second Sex (1949) will notice that the physical prowess she gained from hiking informs much of this ground-breaking feminist manifesto. Her feminist philosophy was tested and nurtured in the hills as much as it was elaborated and expanded in her Paris apartment.

The same goes for her ideas of freedom and responsibility. Beauvoir began her lengthy walks by closely studying French military terrain maps, allegedly for hours. She believed that the simple act of plotting a hike was a vital step in finding freedom, and lamented how few women felt able to organise a long hike on their own. Walking alone was another significant step, and Beauvoir noted how few women had the confidence to be on their own, least of all in remote, unpeopled landscapes. Walking alone for Beauvoir meant taking full responsibility for her safety and her material needs. She had never been so utterly dependent on herself – and she relished it. 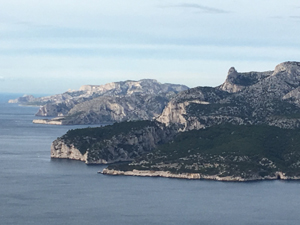 Beauvoir started hiking after arriving in Marseilles as a young school teacher. Having no family or friends to occupy her, she decided to spend her weekends walking. In an old dress and a pair of canvas espadrilles, and a basket of bananas and buns on her arm, she set off to explore the surrounding countryside. Here in the hills and white cliffs surrounding Marseilles her feelings for nature bloomed (they weren’t shared by Sartre, who claimed to be allergic to chlorophyll). Beauvoir felt that women and nature share a unique bond which could enrich their lives, if only they let it.

As her confidence grew, Beauvoir’s hikes became increasingly ambitious. She frequently hiked for 12 hours, often covering 30 kilometres in a single day. Her walks were ‘expeditions’, she claimed, each one ‘a work of art in its own right’.

Later, her expeditions began to follow a pattern. After any rejection, failure, or other bruising experience, she would pack a rucksack and disappear to walk her distress out. In her memoir, The Prime of Life (1960) she claimed that long walks preserved her “from boredom, regret and several sorts of depression.” But they were also redemptive: they re-calibrated her in a way nothing else could.

Simone with her sister and father, 1926. Simone is on the right

After leaving Marseilles, Beauvoir took hiking holidays, either with a friend or lover, or more often on her own. She walked often for a week, occasionally for three weeks. Mountains were her preferred landscape – the emptier the better. But she also had an affinity for trees and woodland. She slept rough, on benches and in barns, and carried a felt-covered water bottle full of red wine. She often hitched a lift to start points, then fended off attackers and molesters along the way. Nor did she escape brushes with death: a tumble into a remote crevice and pursuit by a rabid dog were two occasions where her mortality raced before her eyes. These experiences were critical tests of her self-reliance, proof of her autonomy. She was immensely proud of her independence and her capacity for walking, crowing repeatedly of how far and how high she had climbed.

Yet she never made grandiose statements about walking and philosophy. Quite the reverse. In a letter to Sartre from an Alpine hike she wrote, “I’m not doing much thinking. I’m blissful.” In another letter she declared that she had not “a thought in her head apart from flowers and beasts and stony tracks and wide horizons.” But to omit Beauvoir from any book on walking and philosophy on the basis of these two quotes would be a huge mistake, because it was while walking alone in forests and hills, pushing herself to her physical extremities, that Beauvoir first realised she could flee neither from her freedom nor her responsibilities – that she was answerable entirely to herself. As a woman alone, she felt this more acutely than any of her male peers, I think.

I also think that it was here that she finally cast off all notions of God, since she had found an alternative transcendence in nature. This is expressed eloquently in the first volume of her memoirs: “I was no longer a vacant mind, an abstracted gaze but the turbulent fragrance of the waving grain, the intimate smell of the heather moors, the dense heat of noon or the shiver of twilight… I was as vapour in the blue airs of summer and knew no bounds.” It was here that she grasped the full meaning of being.

Now please can someone write a book about walking female philosophers?

Annabel Abbs is the author of Windswept: Walking in the footsteps of remarkable women, an exploration of the effects of walking on female thinking, just published by John Murray Press.

The Ethics of Ambiguity

Jean-Paul & Simone In The Digital Age