When Johnny Depp raises a wry eyebrow on screen, it’s an ‘existential performance’. When Donald Rumsfeld says there are ‘unknown unknowns’, they call it ‘existential poetry’. Though many politicians and entertainers welcome the label, Albert Camus certainly did not. Even so, many people, even in academic publications, have inaccurately identified him as an existentialist. What in the name of Nietszche is going on? 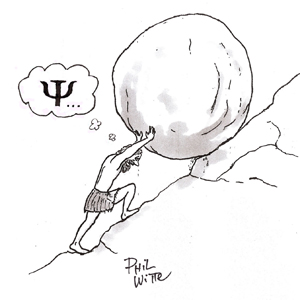 In an interview in Les Nouvelles Littéraires, 15 November, 1945, Camus said point-blank: “I am not an existentialist.” He went on to say, “Sartre and I are always surprised to see our names linked. We have even thought of publishing a short statement in which the undersigned declare that they have nothing in common with each other and refuse to be held responsible for the debts they might respectively incur. It’s a joke actually. Sartre and I published our books without exception before we had ever met. When we did get to know each other, it was to realize how much we differed. Sartre is an existentialist, and the only book of ideas that I have published, The Myth of Sisyphus, was directed against the so-called existentialist philosophers.” Camus compared existentialism to “philosophical suicide,” causing followers to “deify what crushes them” – saying, in effect, that they turn negation into a religion. Camus in turn had a religion of his own – a quasi-pagan quasi-Greek reverence for nature. Case in point: Sisyphus, his hero of the absurd, who is condemned to push a heavy boulder up a hill for eternity, only to watch it roll down each time into the valley below. Sisyphus achieves a serene unity with the physical world: “The cheek tight against the stone, the shoulder bracing the clay-covered mass, the foot wedging it, the fresh start with arms outstretched, the wholly human security of two earth-clotted hands” (The Myth of Sisyphus, 1942). In Camus’ version of the story, Sisyphus is happy. If Jean-Paul Sartre had written it, Sisyphus would have experienced nausea as he contemplated the alien substantiality – the ‘being-in-itself’ – of the rock.

So what is existentialism, and why does Camus not qualify? In simple terms, Sartre believed that existence precedes essence; Camus however contended that essence precedes existence. That is to say, in Sartre’s bleak cosmos, man becomes conscious primarily of his existence as a free agent, and is then condemned to forge his own identity – his essence – in a world without God. Camus, on the other hand, was willing to posit legal rules so absolute that they could be said to point to ‘essences’ – among them a belief that almost all violence is immoral. Therein lies the foul: dogmatic principles for living, no matter how well intentioned, are not ‘existential’.

Although Camus is invariably linked with Sartre, whose name is synonymous with existentialism, they were an odd couple, who clashed like Voltaire and Rousseau, or Verlaine and Rimbaud. Sartre was tiny, plump, and ugly; Camus tall, elegant, and handsome: Sartre played Quasimodo to Camus’ Humphrey Bogart. Sartre famously described man as a “useless passion”; Camus described himself as a man of passion. Sartre felt most at home in the dark cafés of Paris; Camus in the blazing sunlight of the Algeria of his childhood. Sartre wrote at Mozartian speed; Camus at Beethoven’s tortured pace.

Their political differences spilled into public view in 1952, in the pages of Sartre’s newspaper Les Temps Modernes. By this time, Sartre’s views had evolved to include support for communism, which Camus regarded as the extension of a harsh Teutonic tradition stretching from Hegel to Marx, and reaching a perverse conclusion in Stalin’s labor camps. He decried Marx’s theory of history, dialectical materialism, and its use by communists to “authorize any excess” in their quest for a classless society. In his view there are no privileged executioners.

In his fashion, Sartre also opposed Stalin’s methods – while at the same time claiming that mass imprisonment in the Soviet Union was not as bad as one lynching in the United States. He objected, however, to the exploitation of Stalin’s labor camps by the ‘bourgeois press’ to fuel their anti-communist propaganda.

Albert Camus by Woodrow Cowher. More work of his can be seen at instagram.com/woodrawspictures.

But after Camus’ taunt that Sartre was a detached intellectual who merely pointed his armchair at history, Sartre stabbed back: “My dear Camus: our friendship was not easy, but I will miss it… I don’t dare advise you to go back to Being and Nothingness, since reading it would be needlessly difficult for you… You are only half-alive among us.” Privately, Sartre characterized Camus as “a kind of schoolteacher, worthless in philosophy.”

Whew. I sum it up this way: Camus was a poet who wished he could be an influential thinker; Sartre a deep thinker who wished he could attain the eloquence of a poet. Camus stumbled with the minutiae of philosophical logic, and Sartre with words – as anyone who has tried to read either closely will quickly discover. Yet only one of them was an existentialist.

Greg Stone is a media consultant, independent producer and existential thinker in the Boston area.

“I have a philosophical secret!”