Sándor Szegláb decodes the hidden message of the Tractatus.

The statements of Ludwig Wittgenstein’s Tractatus Logico-Philosophicus start with index numbers. It is taken for granted that this indexing is used in such a way that 1.1 is a comment on or elaboration of 1, 1.11 and 1.12 comment on 1.1, and so forth. With Wittgenstein, however, nothing should be taken for granted. I will here demonstrate that he used his index numbers to hide a secret message. The secret meaning of the Tractatus in turn may also help ease the apparent tension between Wittgenstein’s negative alogicalism – his ultimate skepticism about the applicability of logical analysis to anything that really matters – and logical positivism, the philosopher camp that many have associated him with.

Questioning the real use of terms is of fundamental importance, as we learn from 6.211: “In philosophy, the question ‘Why do we really use that word, that proposition?’ constantly leads to valuable results.” That Wittgenstein was aware of the need for asking this very same question about the numbers he uses in his foundational work on logical atomism is clear from what he says in 5.453: “All numbers in logic must be capable of justification.” We must therefore find out whether his usage of indexes in the Tractatus can be justified. The text itself shall be our guide.

So why did Wittgenstein really use these number indexes? We still need to make clear what is the nature and meaning of the sign. Wittgenstein readily helps us in 3.1431: “The essential nature of the propositional sign becomes very clear when we imagine it made up of spatial objects (such as tables, chairs, books) instead of written signs. The mutual spatial position of these things then expresses the sense of the proposition.” We are thus advised to imagine the sign as being made up of spatial objects, and that the mutual position of these objects expresses the sense of the proposition. But what is this proposition a proposition about? As we learn from 6.124, “The logical propositions describe the scaffolding of the world, or rather they present it.”

To sum up, then, the number indexes are intended to make us recognize the meaning of a sign that is perceptible by the senses, and the mutual spatial position of the objects making up the sign expresses the sense of a proposition, which in turn describes, or presents, the scaffolding of the world. The only remaining difficulty is to figure out how these number indexes are related to a spatial arrangement of objects, and which particular number indexes are relevant to this task.

Wittgenstein tells us in 6.3, “Logical research means the investigation of all regularity” (emphasis in the original). Following this advice, and noting that the most natural way to connect numbers with spatial arrangement is through utilizing a coordinate system, we can now reveal a regularity by arranging objects, the x and y positions of which objects are given by the first and second digits of the number indexes. Which number indexes are we going to use for that arrangement, you ask? Evidently Wittgenstein meant us to rely on the very same numbers he used to hide his secret message, that is, the ones we quoted above.

Now take a look at the resulting arrangement of spatial objects. The sign is a smiling face. The sense of the proposition that is expressed is to be happy. And this may indeed describe, or rather present, the scaffolding of the world. 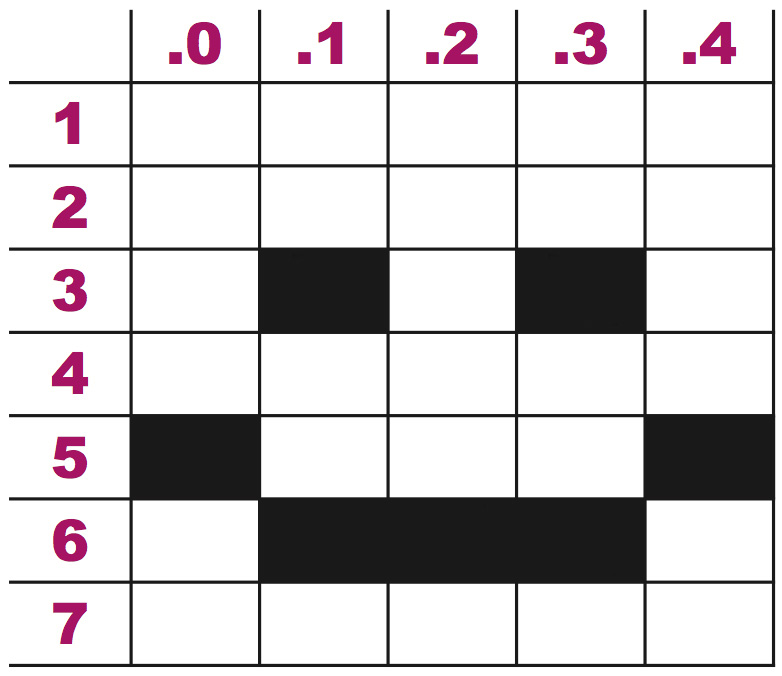 Sándor Szegláb is a pattern clerk at the Swiss Federal Institute of Arguments from Authority.