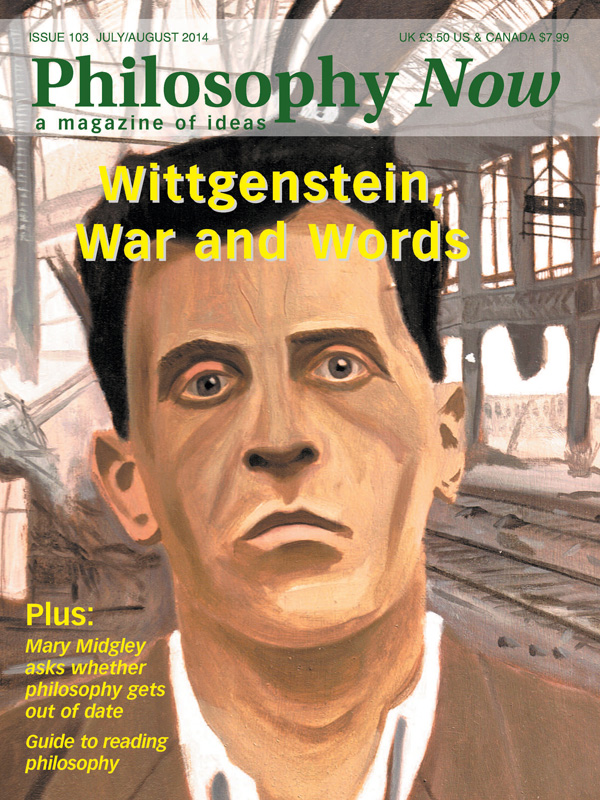 Stuart Greenstreet explains how analytical philosophy got into a mess.

Carlos Muñoz-Suárez guides us on a trip down the linguistic rabbit hole.

“The world is all that is the case”

José Zalabardo investigates which problem Wittgenstein is trying to solve.

Sándor Szegláb decodes the hidden message of the Tractatus.

Does Philosophy Get Out of Date?

Paul Biegler asks whether the way we form our beliefs means we’re hardwired to succumb to global warming.

Rick Lewis on libraries, philosophical classics, unexpected discoveries and the challenges of a digital age.

How to Read Philosophy

What follows is an extract from a forthcoming book called AQA AS Philosophy by Gerald Jones, Dan Cardinal & Jeremy Hayward – an engaging, student-friendly textbook designed to help UK high school students embrace and enjoy philosophy at AS level. It seemed such a useful guide that we decided to print it here as well.

Hans Lenk and Ulrich Arnswald use John Dewey’s distinction between public and private life to consider some implications of information technology.

The Impossibility of Maximizing Good Consequences

Dale DeBakcsy tells us how Ludwig Feuerbach revolutionized philosophy and got absolutely no credit for it.

How Should I Live?

The following readers’ answers to this central human question each win a book.

Ethics Without Morals by Joel Marks

Nick Everitt is uncertain about a book on Knowledge.

Patricia Cleveland-Peck gets some ‘dodgy’ advice from philosophers concerning How To Live.

Edo Shonin and William Van Gordon dream of the not too distant future.