Carlos Muñoz-Suárez guides us on a trip down the linguistic rabbit hole.

“Most of the propositions and questions of philosophers arise from our failure to understand the logic of our language.”
Ludwig Wittgenstein, Tractatus Logico-Philosophicus 4.03

On 13th March 1919, Ludwig Wittgenstein wrote a letter telling Bertrand Russell that he had completed a book entitled Logisch-Philosophische Abhandlung. The English version was later given the Latin title Tractatus Logico-Philosophicus. At that time, and for almost a decade afterwards, Wittgenstein thought that the Tractatus contained a definitive solution to all the fundamental problems of philosophy!

Undoubtedly the Tractatus is a genuine challenge to philosophy, and a result of deep philosophical efforts. Its aim is to (dis)solve philosophical problems through the logical analysis of language. As well as introducing a pioneering view regarding the complex relationships between thought, language and reality, a book purporting to achieve that lofty goal might also be supposed to be very clear, detailed and exhaustive. It has been widely accepted that the Tractatus was innovative in generating a general theory about such relationships. Nonetheless, it is written in a laconic style expressed through numbered aphorisms, sometimes insightful, sometimes enigmatic. It is a style apparently incompatible with explicit explanatory clarity, detail or exhaustiveness. Unsurprisingly, it has given rise to competing interpretations and analytical responses, by for instance Bertrand Russell, Frank Ramsey, Rudolf Carnap, Karl Popper, Max Black, P.M.S. Hacker, Jaakko Hintikka, Elizabeth Anscombe, Stanley Cavell, Cora Diamond, James Conant, and a long list of other philosophical luminaries. As this might indicate, it is pretty difficult to introduce, even to paraphrase, the core lessons deriving from the Tractatus without provoking controversy among the experts.

Reading the Tractatus is like finding your way through a cave system that you know to have one entrance, seven segments, and in which you are barely able to glimpse an exit. Each segment has an initial aphorism. The illuminated entrance of the cave is itself adorned by the truism, “The world is everything that is the case” (1), followed by less intuitive claims. There appear walls full of laconic sentences, and you are led deeper and deeper. Light attenuates as you descend, until you are in shadow. You eventually finds fissures, intentionally carved by Wittgenstein, which allow some light to filter in and somehow indicate a route to the exit. However, sometimes you have to look for sources of light of your own to comprehend the cavern. As for the way out, the last segment of the Tractatus recommends the reader to repudiate the knowledge that has been acquired by reading it. According to Wittgenstein, “anyone who understands me eventually recognizes [the propositions of the Tractatus] as nonsensical, when he has used them – as steps – to climb up beyond them. (He must, so to speak, throw away the ladder after he has climbed up it).” (6.54).

The Logical Structure at the Core of the Tractatus

Or we could say the Tractatus is a building with three floors – reality, thought, and language – and a unified, solid core supporting the whole structure – logic. Neither reality, nor language, nor thought, can be articulated without making reference to logic, since, according to Wittgenstein, their complex connections must have a logical structure; and they could not be beyond logic, since they would then lack structure. Logic is therefore essential to what we think and say, as well as to the reality we think and talk about. However, the logical structure is neither imposed nor regulated by what we think or say.

Before becoming a linguistic philosopher, Wittgenstein trained as an engineer, and then, under Bertrand Russell’s sharp eye, studied the foundations of mathematics. Perhaps this explains why the Tractatus looks like the work of a sort of conceptual engineer. In it, Wittgenstein describes reality as an immense device whose pieces perform together, giving rise at different levels to different configurations and abstractions, among them language and thought. Like cogs in a machine, all the aphorisms in the Tractatus serve an overall aim. In his Preface, Wittgenstein describes that aim as follows:

“the aim of the book is to draw a limit to thought, or rather – not to thought, but to the expression of thoughts: for in order to be able to draw a limit to thought, we should have to find both sides of the limit thinkable (i.e. we should have to be able to think what cannot be thought). It will therefore only be in language that the limit can be drawn, and what lies on the other side of the limit will simply be nonsense.”
(trans. D.F. Pears and B.F. McGuinness, Humanities Press, 1961)

Wittgenstein declared his goal in the Tractatus to be eliminating from philosophy the nonsense deriving from distorted uses of language. This search pressed him to reflect on the limits of thought and language, and, in particular, about the limits of sense, that is, of meaning.

Wittgenstein’s exploration led him to the view that anything that can be thinkable or expressed by language has sense. As he writes, “everything that can be thought at all can be thought clearly. Everything that can be put into words can be put clearly” (4.116). But, if anything that is thinkable or expressable by language has sense, how can we talk about nonsense? According to Wittgenstein, we can neither think nor talk about nonsense, since by definition nonsense cannot be talked about meaningfully, that is, logically. Nonsense can merely be shown; and showing nonsense is showing that there is something lacking logical structure. To Wittgenstein, philosophical activity consists of showing nonsense without transgressing the limits of logical space, whose limits are the limits of sense.

Wittgenstein’s touchstone, then, is the logical analysis of language. But before dealing with this, he first describes the target of any thought or linguistic expression: reality. His description isn’t the kind of description that, for instance, a physicist would offer on the basis of scientific theories and laws. According to Wittgenstein, the logical structure and constitution of reality can be discovered by means of logical analysis rather than by empirical or scientific scrutiny. In a nutshell, Wittgenstein’s description of reality is aimed at capturing its formal or logical structure – like describing the core structure of a building rather than its finishing or furniture. 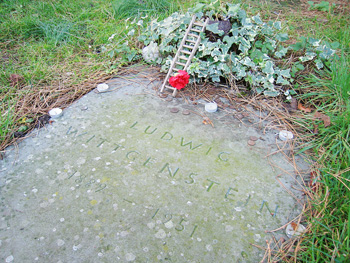 Wittgenstein’s grave in Cambridge: “He must, so to speak, throw away the ladder after he has climbed up it.’ (6.54)

Language and thought now enter the scene. On the basis of this abstract description of reality, Wittgenstein introduces the underpinnings of what is sometimes called (by other philosophers) ‘the Picture Theory of Language’: “We picture facts to ourselves” (2.1). According to this theory, the structure of true things said about the world (and so also thought about it) mirrors the structure of the world itself: “A picture is a model of reality” (2.12) – in the sense that “in a picture objects have the elements of the picture corresponding to them” (2.13). We are able to evaluate what we say in terms of truth and falsehood, since “a picture agrees with reality or fails to agree; it is correct or incorrect, true or false” (2.21). Yet pictures don’t only represent facts, they can also represent possible states of affairs. Please note though that the term ‘picture’ is itself a picture, a metaphor. Wittgenstein doesn’t mean images in your mind, but rather a way of (metaphorically) seeing the world through language.

“Most of the propositions and questions to be found in philosophical works are not false but nonsensical” (4.003). This is Wittgenstein’s battlecry not only in the Tractatus, but also in his later writings too. In the Tractatus, this conclusion relies on specifying a logical language, in which the confusions deriving from ordinary language get excluded. A logical language is a language explicitly governed by logical syntax, or in other words, a language whose logical structure is evident.

Wittgenstein specifies a universe of logical rules that define true and false propositions. Such a universe of deep logical relations constitute the deep structure of a spoken or written language such as English, Spanish or German. But, Wittgenstein claims, “Everyday language is a part of the human organism and is no less complicated than it. It is not humanly possible to gather immediately from it what the logic of language is.” (4.002). A large part of the Tractatus is concerned with trying to make explicit the formal (logical) structure of any given language use regardless of its appearance in speaking and writing. To Wittgenstein, ordinary spoken and written language normally shows just the appearance, not its underlying logical structure, from which several errors in philosophy have resulted. In fact, according to Wittgenstein, many philosophical problems derive precisely from thinking that we can know the deep structure of reality, language and thought, by trusting the ways we normally speak and write. Wittgenstein’s goal is to get to the logic underneath the appearances.

While dealing with the logical structure of reality, the Picture Theory of Language, and the deep structure of language use grasped by the development of a logical language, Wittgenstein sometimes writes aphorisms which epitomise what it is often called the ‘mystical’ aspect of the Tractatus. In this vein, he claims for instance that “The world and life are one… I am my world” (5.621, 5.63); or “Death is not an event in life: we do not live to experience death… Our life has no end in just the way in which our visual field has no limits.” (6.4311). The Tractatus closes with a set of aphorisms indicating Wittgenstein’s views about death, immortality, life, belief in a god, ethics and aesthetics, and other very difficult issues. So the Tractatus isn’t just the outcome of a genuinely great effort of thinking about logic and the structure of reality, Wittgenstein’s existential preoccupations can also be glimpsed in it. One of the most intriguing conclusions Wittgenstein arrived at in the Tractatus is that ethical and aesthetic ideas are beyond what can be said and, therefore, beyond logical space, the space of sense. Despite this, Wittgenstein confessed in a letter to one of his editors (Ludwig von Ficker):

“My work consists of two parts, the one presented [in this manuscript] plus all that I have not written. And it is precisely this second part that is the important point. For the ethical gets its limits drawn from the inside, as it were, by my book… I’ve managed in my book to put everything firmly into place by being silent about it.”
(Prototractatus, p.16, ed. by B.F. McGuinness, T. Nyberg and G.H. von Wright, Cornell University Press, 1971.)

Carlos Muñoz-Suárez was an assistant professor of philosophy in Columbia and is now a doctoral researcher at the University of Barcelona.

There are seven main propositions. Each of them (apart from the seventh) is followed by subsidiary propositions, like this:

1 The world is everything that is the case.

1.1 The world is the totality of facts, not of things.

1.11 The world is determined by the facts, and by their being all the facts.

1.12 For the totality of facts determines what is the case, and also whatever is not the case.

1.13 The facts in logical space are the world.

1.2 The world divides into facts.

1.21 Each item can be the case or not the case while everything else remains the same.

2 What is the case – a fact – is the existence of states of affairs.