The film and stage adaptations of Michael Morpurgo’s novel War Horse have won international acclaim. One way of understanding the overwhelmingly enthusiastic audience reactions – especially to the play’s puppetry – is to reflect on the aesthetics, and then on the underlying ethics, involved.

In terms of its narrative form, the story is an epic. Set at the outbreak of World War I, young Albert’s horse Joey is sold to the cavalry and shipped to France to embark on an epic journey. But Albert cannot forget Joey, and being too young to enlist, embarks alone on a dangerous mission to find and bring Joey back home to Devon.

The Aesthetics Of Imitation

In his Poetics (335 BC), Aristotle says that the narrative of epic plots “should be made dramatic… dealing with a single action which is whole, complete and has beginning, middle and end, so that like a single complete creature it may produce appropriate pleasure” (p.61, trans. G.F. Else, 1970).

I saw the National Theatre’s production of War Horse at the New London Theatre, and found it to be of exceptional quality. I suggest that the reason for this was especially the way in which the puppeteers of the puppet horses, in their visible manipulation of their exquisitely crafted and engineered puppets, imitated the characteristics of horses. We knew that the puppeteers were in control, but witnessing their performance challenged this knowledge. Ironically, the animation was so convincing that the ‘horses’ seemed to be on the verge of being out of control. So there was a tension between knowing what was the case and the theatricality of the experience. The suspension of disbelief was profoundly irresistible: these were horses, who breathed, trotted, cantered, galloped, charged, reared-up, neighed, and displayed the antics and peccadillos of the wilful and remarkable animals that horses can be, down to the significant detail of flicking their ears, indicating their shifting attention and mood: only they weren’t horses – being constructed of metal, leather, wood, cane and aircraft cables. To borrow from Arthur Danto’s The Transfiguration of the Commonplace (1981), “commonplace material counterparts” were indeed transfigured. The puppetry represented a beautiful fusion of art, craft and design; indeed, the horse of War Horse, ‘Joey’, is currently on display in London’s Victorian and Albert Museum’s Theatre and Performance galleries, and is justifiably regarded as a beautiful object. 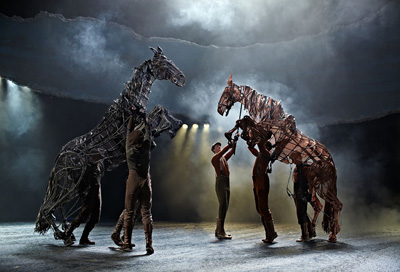 Overall, the aesthetics at work here is imitation of a high order, comprising a rich, powerfully persuasive experience. Danto asserts that imitation “acquires finally the status of… art when it does not merely resemble something, like a mirror image, but is about what it resembles” (ibid, p.68). And in his Art And Its Objects (1980, 2nd Ed), Richard Wollheim discusses representational seeing – ‘seeing as’ (rejecting his earlier ‘seeing in’) – where “seeing appropriate to representations permits simultaneous attention to what is represented and to the representation” (p.213). These revealing characteristics, of seeing as, and seeing how an imitation is about what it is imitating, applied to the theatrical experience of War Horse, seem in stark contrast to the concealing techniques typical of high resolution C.G.I. used in many films.

In Plato’s Republic, Book 10, a dialogue ensues wherein Socrates suggests that imitating the appearance of things might be achieved by use of a mirror, and he says “that’s presumably the kind of craftsman a painter is” (596e, trans. R. Waterfield). Plato seems not to object to imitation per se, then; but he also argued that imitation was concerned with appearance, and thus its application could be deceptive and deflect our attention away from his ‘Forms’, in which ultimate reality, truth and the ‘Good’, consist.

By contrast, Aristotle in the Poetics saw imitation as “rooted in human nature” and responsible for “the origin of the poetic art as a whole.” As he says, “the habit of imitating is congenial to human beings from childhood (…man differs from the other animals in that he is the most imitative and learns his first lessons through imitation).” Aristotle also mentions “the pleasure that all men take in works of imitation.”

These days, the mirror metaphor and its connection with imitation is employed in neuroscience, which has discovered mirror neurons. These neurons, activated when observing movements in others, are also associated with the making of corresponding movements by the observer – that is, with imitation. Such neurons may well have a crucial role to play not only in acquiring motor skills, but also in understanding intention in others, and so developing both emotional responses and empathy.

So imitation is fundamental to many aspects of our being. We necessarily participate in it for practical reasons, but are also engaged and absorbed by it in drama and other arts. Here we are invited to engage aesthetically. The imitations are interesting in their own right, and not because they afford us some practical advantage.

Regarding imitation as a theory of art that informs theatre, those of a cynical disposition might say that the reason War Horse has been so successful is that it panders to the most obvious and unsophisticated concept of art – that of verisimilitude; i.e., resemblance to real life. Philosophically, this benchmark for art is easily challenged, as Jerome Stolnitz makes very clear in Aesthetics and Philosophy of Art Criticism (1960). He compares literal, ‘stenographic’-type depictions with actual art practices. Those processes, by contrast, include imaginative and creative use of formal elements, such as the manipulation of time and space, as well as the expressive portrayals of mood and character, entailing emphasis and exaggeration.

There are further aspects to imitation theory. The importance of epic plot to Aristotle has been mentioned. Let’s also look at his notions of universality and catharsis.

For Aristotle, “poetry [and thus drama] speaks more of universals, history of particulars” (Poetics). So although a particular horse, Joey also represents horses in general. Michael Morpurgo, reflecting on his inspiration for the original novel War Horse, says he wanted to write about the “universal suffering” experienced both by humans and horses, in the carnage of the “shattered world” created in World War I. So Joey represents the suffering of all war horses. This universality is reflected in his design. As the designers and makers Adrian Kohler and Basil Jones say, the horse puppets are ‘sculpturally abstract’ (see warhorseonstage.com). Such abstraction of form conveys a sense of the universal.

Catharsis is the release of emotion by seeing a performance evoking that emotion. It seems that in tragedy, for instance, catharsis is achieved by seeing “remorse of the doer, which shows [that] had he known the facts he would not have done as he did” (Poetics, p.98). In his notes on the Poetics, its translator G.F. Else writes that the usual interpretations of catharsis, “have in common a focus on the fear and pity which are aroused in the spectator.” For audiences’ experiences of War Horse in the theatre, to their likely appreciation of the quality of puppetry already discussed, should be added the quality of the acting, the Vorticist-inspired set design, the lighting, music and sound. The synthesis of these components could not fail to arouse “fear and pity” except in the most obdurate and unsympathetic of spectators. 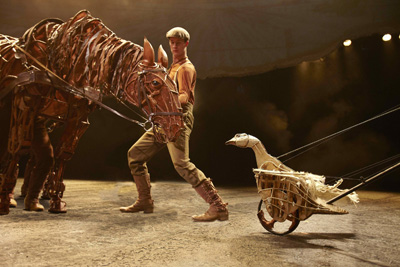 The inextricable connection of theatre with life makes considering the morality of the behaviour portrayed inevitable.

First there are the perennial questions of whether or not dramatic portrayals influence behaviour, for good or ill. Plato obviously thought that they did, in that he argued for censorship of the arts in his Republic. In our time, it may well be that the significance of the link between imitation and neuronal mirroring will prove to be more profound than we have previously thought; and so imitation of the morally praiseworthy may well come to be regarded as appropriate in aesthetic experience – not anathema to it, as some purists might claim. It seems appropriate to now turn to moral issues entailed specifically by War Horse.

To some, it might seem odd, even perverse, to focus on a horse when reflecting on the morality of war – the effects on the human animal surely have priority? However, it is to be remembered that horses don’t plunder resources, nor manufacture weapons to maim, kill and devastate the environment, and yet we exploit them and make them suffer in our wars.

In Animal Liberation (1975) and since, Australian philosopher Peter Singer provides a cogent case against the mistreatment of non-human animals based on evidence of their capacity to experience suffering. This utilitarian ethic is also informed by an evolutionary account of our relatedness to non-human animals. So, he contrasts his more general ‘biocentrism’ with our long prevailing anthropocentrism, where the interests of humans count more than the wellbeing of other animals. That is ‘speciesism’ (this term was originally coined by Richard Ryder in 1970). Singer’s arguments provide a lens though which the appalling plight of horses on the Western Front in WWI is brought into an arresting focus.

The case against the mistreatment of animals is of course not new. Both the Royal Society for the Prevention of Cruelty to Animals and the Blue Cross animal charity originated in the nineteenth century. Furthermore, despite the ghastly conditions on the battlefields of WWI, British army practices for maintaining the welfare of horses set out to be humane, and profound bonds could be established between horse and rider, which often conflicted with the fate of both (this is the focus of War Horse).

Is it anthropomorphic to attribute such attachments to horses, as though they were in some sense morally aware? This may make more sense if we think of the horse’s behaviour not as independent, but rather in a mutuality of co-dependence. This extends aesthetically to the relationship the exemplary puppeteers have with their puppets, perhaps reaching a level of affinity that, to borrow from D.E. Cooper’s A Philosophy of Gardens (2006), might be described as an “epiphany of co-dependence.”

Live theatre affords an opportunity for aesthetic experience of a kind unmediated by screens of various types, for audiences can share the same space/time and atmosphere of artifice with the players. Onlookers therefore perhaps come closer aesthetically to the issues addressed by such performances: here the immorality of war and the exploitation of blameless animals – accompanied possibly by a longing for innocence akin to that of the trusting, reactive sensitivity of the horse, which might help assuage the evils so often perpetrated by our species. At the same time, audiences may be colluding in a futile hope that such horrors are never again to be perpetrated, although simultaneously knowing that they continue to be… Yet it may just be that this kind of experience, although fleeting, can help to stimulate valuable critical thinking beyond the performance – a move from aesthetic appreciation to ethical reflection.’

During a career teaching art, and as a university lecturer in Art and Education, Colin Brookes drew upon aesthetics, philosophy of mind, and ethics. His book, Masquerading as a Philosopher, was published in 2013.

What is Art? and/or What is Beauty?

The Aesthetics of Music by Roger Scruton

How Cubism Tried To Create A New Language

If Life is Finite, Why am I Watching this Damn Game?

The Afterlives of Modernism

On Bowie by Simon Critchley