Tim Madigan on what philosophy means to him.

“Food, glorious food!
What wouldn’t we give for
That extra bit more –
That’s all that we live for
Why should we be fated to
Do nothing but brood
On food,
Magical food,
Wonderful food,
Marvelous food,
Fabulous food!”
‘Food, Glorious Food’ from the musical Oliver! 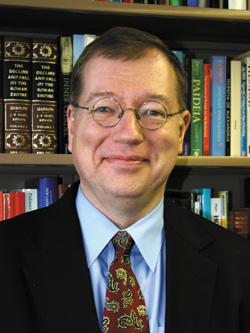 It has been my great fortune to write a regular column for Philosophy Now for the past fifteen years, allowing me to pontificate on all manner of things that angels would fear to tread upon. My schedule has become less predictable of late, so I am retiring the column and passing the torch on to a new generation of thinkers, although I do hope to hold forth every now and then with an article, while I still have a few brain cells firing. I’ve been reflecting of late just how I got into the philosophy game in the first place, and I offer a few biographical confessions below.

Like the Molière character who is astonished to discover that he has been speaking prose all his life, I was astonished to discover in 1980, when I took my first philosophy course as an undergraduate at Medaille College in my hometown of Buffalo, New York, that I had been philosophizing all my life. Until then I had no idea what philosophy was nor what philosophers do (and almost 35 years after that I’m still not really sure, but I am at least willing to admit my ignorance.) I was amazed to learn that there were distinguished people – and sometimes not so distinguished people – in the past who asked the same sorts of questions that had always perplexed me, but which I had never been able to discuss with family and friends, who dismissed them as either nonsense or befuddling: How do we know God exists? Did time have a beginning? Why doesn’t everyone agree about what is moral? And if a tree falls in the forest, will it crush a squirrel running around its trunk?

I soon took all the philosophy courses offered at Medaille, every one of which was taught by the sole philosophy professor there, Lee Nisbet. I can still remember him sitting down with me in the school cafeteria and suggesting that I consider transferring to his alma mater, the State University of New York at Buffalo, and majoring in philosophy. There were no more worlds to conquer philosophically at Medaille and he sensed that I clearly had not satiated myself yet on food for thought. At the time I was a Political Science major, hoping to eventually get a job as a government bureaucrat, but Lee’s persuasive powers won out, and I did indeed make the switch, eventually getting a BA, MA and PhD from SUNY-Buffalo.

I was fortunate to attend that institution at a time when it had an embarrassment of riches in philosophical offerings, taking courses in such disparate areas as analytic philosophy, continental philosophy, Marxism, symbolic logic, Wittgenstein, Buddhism, medical ethics, Hume and the Skeptical tradition, African philosophy, pragmatism, Medieval philosophy, Heidegger and Existentialism, feminist theory, Chinese philosophy, humanism, and philosophy through literature. Presiding over the department like a benign Philosopher-King was its long-time chairman, Peter Hare (1935-2008). While his own background was in American philosophy, especially the pragmatism of Charles Peirce and William James, Hare had a deep respect for all areas of inquiry, and had an enviable ability to get along with all the members of the department, a rather remarkable feat given the contentiousness prevalent among such opinionated thinkers. I made the wise choice of selecting Peter as my dissertation advisor, and could not have asked for a kinder, more forbearing, or more exacting mentor (see my tribute to him in Philosophy Now, Issue 66, ‘Remembering Peter Hare’ for more details on his inspiring example).

I had no way of knowing until years later how fortunate I was to receive such a pluralistic education, and how beneficial all of this would be when I would finally get a chance – rarity of rarities – to become a full time professor of philosophy at St John Fisher College, a job I can say in all honesty that I enjoy much more than I would have being a government bureaucrat. The hours and the travel are certainly much better.

Ever since discovering the world of philosophy, I have had an overwhelming desire to share with others the excitement I first felt so long ago. In addition to teaching, I worked for many years as an editor at Free Inquiry magazine, which was run by my old SUNY-Buffalo professor Paul Kurtz, and, as mentioned above, for the past 15 years I have been writing a regular column for Philosophy Now magazine, a publication dedicated to making philosophy accessible to non-academics. I’ve written on a wide array of topics, including Richard Nixon and Machiavelli, the philosophical origins of Sesame Street, ethics and artificial intelligence, the TV character Columbo as a Socratic figure, Immanuel Kant as a football coach, Aristotle and Email, the Man on the Clapham Bus Revisited, and Abbott and Costello Meet Wittgenstein. In writing these columns I was able to draw upon the synoptic knowledge that I received from my well-grounded SUNY-Buffalo years, and my hubristic tendency to venture into areas I know nothing about and should keep far away from. Like a moth drawn to the flame, I can’t resist waxing philosophical on matters that are none of my business, since – to paraphrase Jacob Marley in A Christmas Carol – “humankind is my business!” I am grateful to Philosophy Now for giving me this opportunity to do so.

It was in fact Peter Hare who first encouraged me to contact its editor, Rick Lewis. Peter and I had talked about trying to put together a magazine that would highlight all the areas of philosophy, and be written in an accessible and inviting manner. Shortly after we started discussing this, Peter came back from an American Philosophical Association Eastern Division meeting and let me know that he had met a young man named Rick Lewis, who had recently started just such a publication. There was no need to start afresh – all we had to do was support Rick’s efforts as best we could. Being a lazy sort, and knowing how much work is involved in running a magazine, I heaved a sigh of relief and took Peter’s good advice to contact Philosophy Now.

It has been my pleasure over the years to visit Rick and his equally philosophically committed partner Anja Steinbauer several times in their London office, and we have met over the years in various other locations as well. I eagerly anticipate each issue of Philosophy Now (even when I’m not in it!), every one of which has given me a bacchanalian amount of food for thought to digest. I was also delighted to participate in the 20th anniversary celebration for the magazine in 2011 and am looking forward to being there for the 25th extravaganza in 2016.

It was said of Pythagoras, the great Ancient philosopher, that he coined the word philosopher – meaning “lover of wisdom” – to connote the fact that he was not a wise man, meaning one who knows all, but rather one who wished to learn as much as he could. The word ‘philosophy’ therefore is both humbling and ennobling – we must always be aware of how little we really know, but should also be proud of how much knowledge we have attained. Philosophy Now continues to be – as Peter Hare perceptively saw so many years ago – a wonderful means of conveying information in a collegial, popular, and thought-provoking manner, and it demonstrates with every issue that the fountain of philosophy is ever flowing. Like Oliver Twist at the end of the song above, when it comes to food for thought I always want some more, and Philosophy Now is happy to be of service. Bon appétit!

When it comes to Food for Thought, Tim Madigan is a glutton for argument.