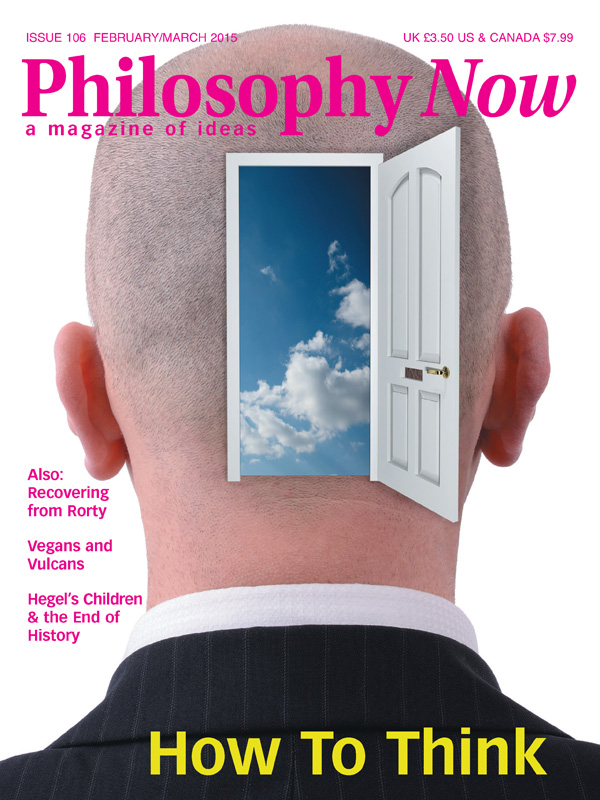 Marianne Talbot tells us how to use the ultimate in transferrable skills.

Noson Yanofsky tells us how to deal with contradictions and the limitations of reason that arise from them.

The Need To Move Beyond Homo Faber

Maria daVenza Tillmanns argues that we need to be holistic in our approach to solving complex problems.

Theories That Refute Themselves

Arnold Zuboff untangles the problems of a particular type of bad thinking.

Dale DeBakcsy recalls his personal journey from Positivist to Pragmatist and back again.

The Allegory of the Alien Invasion

Lisa Kretz asks: How would you feel if it were you?

Why An Alien Invasion Is No Argument For Animal Rights

What Good Is Nature?

David Dobereiner reviews the history of the nature of Nature.

Susan Lucas on how words gain meaning from their context.

War of the Words • Witt and Wisdom • Classics and Scholarship • Determined Not To Know? • Reality and Morality • A Climate of Criticism? • Caged by Mathematics? • Relationships and (A)Morality

Tim Madigan on what philosophy means to him.

Raymond Tallis tries to work out where he is.

The End of History and the Last Man by Francis Fukuyama

Alexander Joy observes a clash of ways of cultivating the mind.