If you discovered that you were not the offspring of the two people you thought you were, how would you react? Would you not be very affected, taking your identity to have been nevertheless securely established by the family in which you were reared? Or would the revelation cause you to doubt who you were, making you revise your sense of yourself?

Philosophers sometimes put forward this sort of thought experiment in order to problematize our notion of personal identity – our understanding of what makes each of us the unique individual we are. Now complicate the thought experiment: Imagine that what you find out about your biological identity makes you a biological member of a social group that you despised. Imagine, for example, being raised in an anti-Semitic family in pre-World War II Vienna, only to discover in your late teens that you had Jewish ancestry, as one of my former philosophy professors actually did. How would this more complex revelation affect you? How difficult would it be to assimilate such news into your sense of who you were, especially in light of the anti-Semitic beliefs you had come to accept?

A similar situation is the premise of Lorraine Lévy’s The Other Son, a 2012 film that deserves more notice than it has received. Here a Jewish Israeli couple and a Palestinian West Bank couple discover that their sons, both born on the same day, were inadvertently switched during the confusion following an air raid. The mistake is discovered when the Israeli boy, Joseph, is being screened for service in the Israeli Defense Force (IDF). His blood type indicates that he cannot be the son of Orith and Alon Silberg. At first, Alon suspects Orith of being unfaithful to him, but soon the truth of the switch emerges. Given the political tensions between the Israelis and the Palestinians, one would expect the discovery of the truth about the boys to cause a great deal of tension in each of the families. The film does not disappoint us in this regard. For the boys, the parents, and the other siblings in both families, the discovery of the disjuncture between their biological and their ‘familial’ identities causes real difficulties. 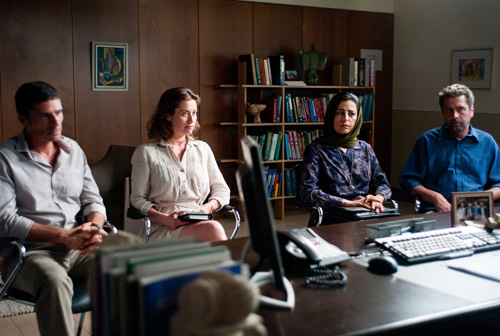 Hybridity is a term many social theorists use to describe human identity. It’s borrowed from genetics, where it describes an offspring resulting from the mating of two different species. A well-known hybrid is the mule, which is a cross between a female horse and a male donkey. In social theory, the term has been used to describe the identity of people for whom distinct aspects of their identity can be traced to different origins. An early example of this can be found in Franz Fanon’s Black Skin/White Masks (1967), where Fanon describes a black post-colonial in Martinique as having a hybrid identity through his identification with the French because of the educational system while at the same time he feels he cannot be a Frenchman because of his skin color.

The Other Son provides another example of hybridity in the two switched sons. One way in which the film emphasizes this is through its inclusion of features in each boy’s character that seem out of place in their social family but are taken to be determined by their biology. Take Joseph, part of a well-off Jewish family living in Tel Aviv. His father is an officer in the IDF, and the family is religious. Joseph is a bit of a slacker, and wants to be a musician when he grows up, something his father cannot fathom. However, once it is revealed that Said, his biological father, is a musician, we are meant to understand that Joseph’s interest and talent comes from his biological father. And eventually the film depicts him singing a song with the entire Palestinian family. The case of Yacine, the boy who has been raised by the Palestinians Leifa and Said Al-Bezaaz, is similar. When we first meet him he is returning from Paris, where he has completed his Baccalauréat with honors, and is home for a vacation before entering medical school. It turns out that his biological mother, Orith, comes from France. It is as if the film wants us to believe that his biology determines both his educational and career path.

So is the film presenting us with a complex thought experiment to establish the importance of identity hybridity? Of course, this is part of what the film accomplishes. But I think there is more to it. The real point of the film, as I see it, is to use these hybrid boys to make a case for thinking about the identity of Palestine – a land that includes Israelis as well as Palestinians – as similarly hybrid. Indeed, I take the film to be making a very subtle and understated case for a one-state solution – an option for the future of Israel and Palestine that is hardly even visible on today’s political spectrum.

To see this, it will be helpful to compare The Other Son to Stanley Kramer’s Guess Who’s Coming to Dinner (1967), which is also a political statement by means of a pair of families divided by social differences. Guess Who’s Coming to Dinner was the first American mainstream film to feature an interracial couple in a positive light; and that couple was presented by that film as causing just as much consternation to their families as the two switched boys cause theirs. The parents of the young couple (especially the fathers) were opposed to the marriage, and most of the drama of that film was the result of watching how the parents would come to accept the marriage as something that should be fostered, not opposed. The real import of the film was the case made by its racially integrated couple for integration as the only available solution to America’s racial crisis. The parents’ acceptance of the couple was symbolic of the need for Americans to accept racial integration as the only viable option for curing the racial ills endemic to American society. Similarly, The Other Son uses the difficulty the two families have in adjusting to the fact of their sons’ having been switched as a metaphor for what Israelis and Palestinians need to face in order to come to a viable solution to a difficult, perhaps intractable, situation.

But unlike Guess Who’s Coming to Dinner, the two boys themselves face as many difficulties in resolving their identities as do their parents. Joseph, for example, is taken aback when his rabbi tells him that he is not Jewish, but could easily convert. Yet as he explains to the rabbi, he already has a clear Jewish identity. He has been circumcised and Bar Mitzvahed, and is one of the rabbi’s best students. However, Jewish law states that only those born of a Jewish mother are Jewish; so Joseph no longer is Jewish, at least from an orthodox point of view. He experiences this as a rejection, and he himself then comes to question whether he is really Jewish, given his biological origin. Indeed, given his acceptance of Jewish identity up to this point, he seems to have no choice but to accept the conclusion provided by the religion. However, this causes him to reject the very Judaism that has come to shape his identity.

Yacine has less trouble assimilating the new information. He explains that he has been studying in France, so that he is more distant from the Israeli-Palestinian conflict. His plan to be a doctor and return to the West Bank is not jeopardized by the revelation of his origin. In fact, he now comfortably spends time selling ice cream to the sunbathing Israelis on the beach in Tel Aviv as a result of his biological father procuring him a visa. Yacine’s older brother Bilal has more difficulty with the new information about his brother, whom he now sees as a Jew. Most of the tension in the Palestinian family comes from Bilal’s rejection of Yacine. 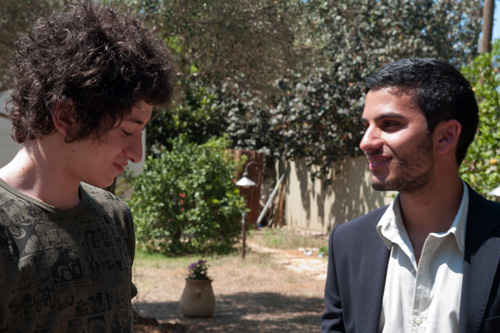 But the deepest sources of conflict between the two families are the fathers. As in Guess Who’s Coming to Dinner, the fathers represent the hardened political attitudes that pose real difficulties for the families. The fact that Alon is an officer in the IDF explains both his hostility to the Palestinians, and Said’s anger at having to treat that ‘occupier’ civilly.

So can the two families resolve the problems their new understanding of the biological origins of these two young men causes them? Should they retain the boys they have raised as their children, despite the fact that they are not their biological children? The mothers certainly show that they cannot reject the boys that they have raised because they were not their biological offspring. Or should they treat their biological children in a way similar to how the rabbi reacted, and demand that they convert or be rejected? The only way out for the two families seems to be to accept the fact that since each of their sons is a hybrid – a mix between an Israeli and a Palestinian, between biology and socialization – their two families must similarly become hybrids, unorthodox mixtures of biology and sociality. Although it won’t be easy – the two fathers are shown nervously having coffee with one another and not knowing how to interact despite their attempt to overcome their initial mutual hostility – there is no other option. They cannot deny the reality of either the biological tie they have to one of the boys, or the familial bonds that their parenting has created with the other.

If we focus upon the new hybrid family that results from this acknowledgement, we can see how the film advocates a much-neglected model for a political solution to the Israeli-Palestinian conflict. The film suggests that the Israelis and Palestinians have to overcome their hostility to one another and accept a new hybrid ‘family’ composed of members of both of the original ‘families’ analogous to the hybrid Silberg-Al Bezaaz family whose creation the film portrays. From what I can tell, the critics of this film (at least those writing in English) failed to see the subtle manner in which it uses its switched-at-birth story to advocate a political vision barely acknowledged these days. With the recent horrific events in Gaza only beginning to fade from memory, the need for a new way of conceiving of a resolution to the Israeli-Palestinian relationship is all the more pressing. This under-appreciated film deserves to be seen more widely, and its case for a hybrid state acknowledged and discussed.

Thomas Wartenberg is the author of Thinking on Screen (Routledge). He teaches philosophy and film studies at Mount Holyoke College in Massachusetts.

The Sex Code by Francis Bennion